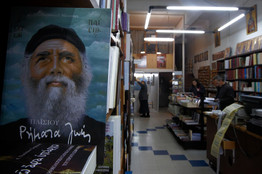 A book on Elder Paisios on display at an Athens bookstore. Photo: Alkis Konstantinidis for The Wall Street Journal
Souroti, Greece—Legend has it that nearly three decades ago, a bearded Orthodox Christian mystic visiting here made an unsettling prediction: Greece in the future would experience a "great disruption and confusion," followed by hunger and political turmoil.

Believers say this grim vision of Elder Paisios, an ascetic monk who died in 1994, was actually a prescient glimpse of the upheaval now gripping this debt-racked country—helping fuel a surge of interest in the Orthodox holy man by Greeks struggling to make sense of a brutal financial crisis.

Elder Paisios, who spent much of his adult life as a hermit on the monastic peninsula of Mount Athos in northeastern Greece, has become a popular sensation—with tales of his prognostications and miracles he is said to have performed posted online and recounted in popular books.

On Saturdays, hundreds of pilgrims line up at Elder Paisios's gravesite here, waiting their turn to kneel, pray and kiss the wooden cross that marks his final resting place. They ask for help finding jobs, paying bills and surviving a downturn that has upended their lives.

"Paisios predicted many things, and his prophecies are now coming true," said Costas Katsaounis, a 41-year-old military officer on a visit to the shrine. "He foresaw the crisis. But he also said it would get better, that we will overcome and prosperity will return. He's helped a lot of people."

Elder Paisios's fame in some ways echoes that of Michel de Notredame, better known as Nostradamus, a 16th-century French apothecary who believers say foretold everything from the rise of Hitler to the terror attacks of Sept. 11.

"Figures like Paisios represent the shaman, the magician of the tribe," said Alexandra Koronaiou, a sociologist at Panteion University of Social and Political Sciences in Athens. "They are the incarnation of a transcendental, invisible power."

With Greece's economy in the fifth year of a grinding recession that is expected to deepen further in 2013, unemployment above 25% and even middle-class families struggling to feed their children, many Greeks feel like their society is teetering on the brink of collapse, and they are seeking solace.

"When there is an event that brings an entire country to its knees, people look for a religious explanation," said Vasilios Makrides, a religious-studies professor and specialist on Orthodox Christianity at the University of Erfurt in Germany. "They are seeking support from the supernatural."

That is driving a fresh boom in all things Paisios. The elder's wizened and bearded face, peering out from below a black cap, adorns devotional banners and cards inscribed with inspirational messages.

Bookstores stock dozens of Paisios-related titles, from books detailing his spiritual teachings to volumes filled with his commentary on everything from the coming of the apocalypse to Greece's retaking of Constantinople, once the seat of Byzantine emperors and now Istanbul. 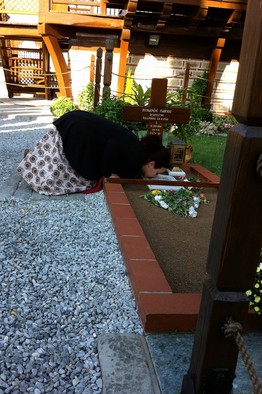 A woman praying at the Elder's grave in Souroti. Photo: Gordon Fairclough/The Wall Street Journal.
"They sell like crazy," said Ionnis Aivaliotis, who works at the Zoe religious bookstore in downtown Athens. "Even nonbelievers are starting to read them. It gives people courage to withstand what's coming."

There is a Paisios diet guide—he was very thin—and a kids' book, "Once Upon a Time, Children, There Was Elder Paisios."

Over the past two years, conservative newspaper Dimokratia has sold 350,000 copies of Paisios-related titles—from compilations of his prophecies to his views on education. Other newspapers carry accounts of his reputed miracles.

Elder Paisios, born Arsenios Eznepedis in central Anatolia in 1924, is part of a long tradition of monastic spirituality that believers say confers a power of divination—to see things others cannot, to interpret signs and predict the course of events.

Even before his death in 1994, he was well known in religious circles, drawing the faithful to Mount Athos for spiritual guidance and advice. Many expect that he will eventually be canonized. (A church spokesman declined to comment.)

But the recent increase in attention has prompted a backlash from skeptics and drawn cautions from some in the Greek Orthodox Church hierarchy.

"People are looking for somewhere to turn," said the Rev. Vasilios Havatzas, head of the church's charitable operations in Athens. "But some are overreacting. They are making him into some kind of prophet," he said, adding: "That doesn't mean everything he said is right."

But in a sign of the broad support for Elder Paisios, Greek police arrested 27-year-old Phillipos Loizos for creating a Facebook page that poked fun at Greeks' belief in the miracles and prognostications of the late monk. He was charged with blasphemy and insulting religion. The blasphemy charge was later withdrawn.

Police received thousands of complaints about the page on the social-networking site for Elder Pastitsios, a play on the monk's name. Pastitsio is a traditional baked pasta dish similar to lasagna. An ultranationalist lawmaker condemned the page in Parliament.

Mr. Loizos said he was using satire to criticize the commercialization of the monk and his message.

Many of Elder Paisios's purported prophecies resonate. "The people will be so disappointed by the politicians of the two big parties, that they will get sick of them," is one that rings true in an era when voter support for the country's two mainstream parties, blamed for the crisis, has dropped sharply.

Some of the elder's reported remarks hint at dark conspiracies—among them that the world is ruled secretly by a cabal of five people. He also predicted national triumphs for Greece, saying that Greeks would defeat Turkey, rule Constantinople and take part of Albania.

Elder Paisios.
"Holy people like Elder Paisios are born once in a thousand years," said Nikolaos Zournatzoglou, who has compiled three books of the elder's pronouncements. "He was a gift from God and the Virgin Mary for humanity."

In Souroti, about 20 miles from the northeastern Greek city of Thessaloniki, busloads of pilgrims arrived one Saturday recently to see the elder's grave. Young and old, they prayed and took pictures. Some plucked a leaf of basil from a plant growing near the simple cross at his head.

Afterward in a gift shop in the basement of the rough-hewn stone church, visitors bought postcards, plaques with images of Elder Paisios and books by and about him, along with icons, crosses and other religious paraphernalia.

"There's a lot of uncertainty now. We don't know what is going to happen," said Anastasia Constantinou, a waitress visiting the shrine who said her family has had to cut back on meat, on driving their car and on other normal activities as their income has fallen amid the downturn.

"People find consolation in faith," Ms. Constantinou, 32, said. "Even though everyday life is difficult, Paisios gives strength to people. He helps them hold on."