This autumn, the Sretensky Monastery choir made a twenty-day tour, visiting Orthodox parishes of the United States. The tour ended… in China—where it had been invited to give two concerts. Although every step these Russians took around the city reminded them of themselves, this land nevertheless remains mysterious and somewhat incomprehensible, wonderful and amazing.. The abbot of Sretensky Monastery, Archimandrite Tikhon, shares with us his impressions of China.

With this interview we are initiating the regular, weekly publication of articles by Fr. Tikhon, the editor-in-chief of the website, Pravoslavie.ru. 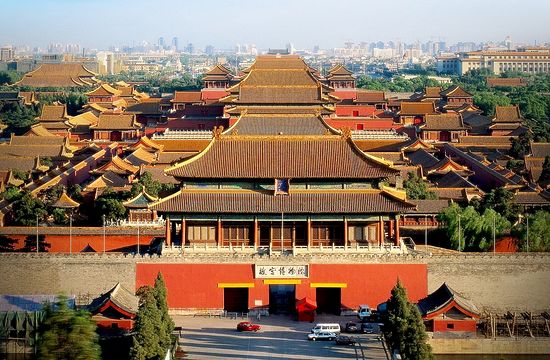 Peking. The Forbidden City.
—Fr. Tikhon, you and the Sretensky Monastery Choir were in China this year. How did that come about, considering the complex relationship between the Chinese government and the Orthodox Church?

—The monastery’s choir was, unexpectedly to us, invited to China by Maestro Long Yu, a man who is very famous in that country. He is the director of the International Peking Music Festival, in which the most acclaimed symphony orchestras, choirs, and soloists participate.

During the preliminary negotiations we placed special emphasis on the fact that the Sretensky Choir is first and foremost an Orthodox Christian, church choir. The activities of the Orthodox Church in China have been officially limited for many decades, and therefore I have to admit that we were quite surprised when a man so close to the higher echelons of Chinese government, who knew full well that we are Orthodox Christian, invited us and not someone else. But the festivals commission confirmed it: yes, the choir of a Russian Orthodox monastery is invited. We warned them that we are not going to remove the religious songs from the program. In reply the commission proposed that we give one concert of church hymns, the other of secular choral art. We agreed.

Officially, in China Orthodox church services are only conducted on the territory of the Russian consulate. Unfortunately no Chinese citizens are allowed there, not even the small group of Orthodox Chinese. Thus, the Chinese had an opportunity to hear Orthodox hymns for practically the first time in many years, in no other place than at our choir’s concert. 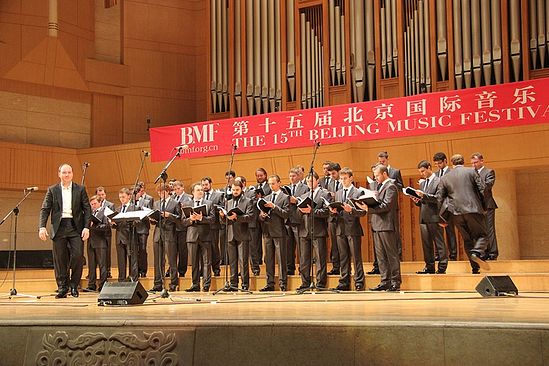 The Sretensky Choir performing in the Forbidden City, Peking.
Their interest was unfeigned. The Chinese are a very musical people and an appreciative audience. There were many young people. There were also many older people there who could still remember the Soviet Union. The hall was filled with many professional artists and music critics. One of the concerts was given in a very special place, the Forbidden City—that is what they call the huge palace complex of the Chinese emperors. The choir’s performance was given very high marks by the audience and critics.

—Did you have an opportunity to walk around Peking?

—Peking is an extraordinarily interesting city. Although few, some ancient structures are still preserved. But as a whole the city has been entirely rebuilt. It is modern, with broad highways and enormous new buildings. The reconstruction carried out in preparation for the Olympics is impressive. Many now write and speak about this. 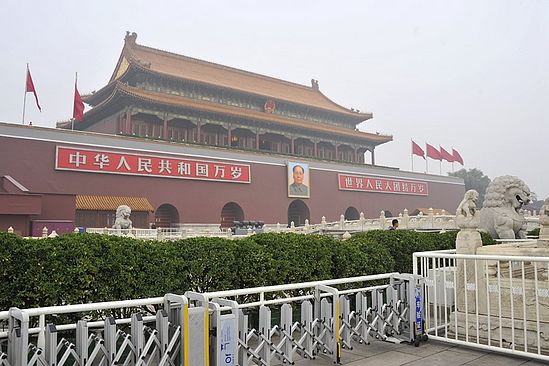 Peking.
—But apparently that is not what amazed you about China?

—You guessed it. This was not my first trip to that country. During the three years after my last trip, much has truly changed. By all indications, the standard of living of this 1.5 billion-strong population is higher. But that is not the main thing.

I was most astounded by what I least expected to see: the blossoming of Christianity in China.

A few years ago, yes, and even before this trip, many assured me that the vast majority of Chinese are simply not capable of understanding Christianity. Supposedly the Chinese, according to them, are not only non-religious; they are almost by nature absolutely incapable of accepting anything spiritual because they are materialistic in the extreme. To faith—and in part to Orthodox Christianity—they are so indifferent and cold that it is completely useless even talking to them about it.

To my great surprise, and—I have to admit—no less great joy, it all turns out to be precisely the other way around.

Yes, of course there is as they say, a cult of money and material success in China, but that’s not for me to judge. The legendary Chinese pragmatism has long been a “byword among the nations”. But what I came across on this trip remains one of the strongest impressions I have had in a long time. 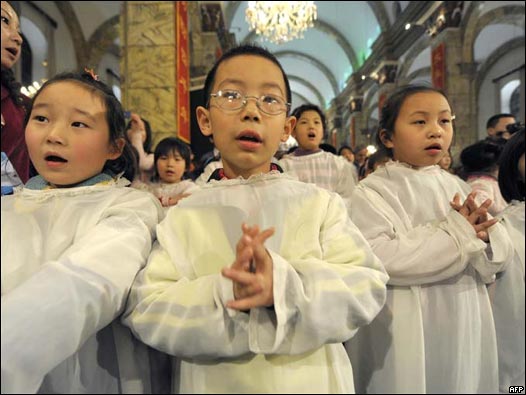 It all began when some Chinese people calling themselves Christians expressed the desire to make my acquaintance after one of them read my book, Everyday Saints in English. To tell you the truth, these new acquaintances of mine couldn’t really say what confession they are in—they just read the Gospels, believe in the Lord Jesus Christ, pray to Him, and firmly and stubbornly consider themselves Christians. Some of them are not baptized at all, others were baptized by Protestants, yet others by Catholics… There are no Orthodox among them for the simple reason that I mentioned earlier in this conversation.

But what faith these Christians have! They invited me to their home in a new apartment building on the outskirts of Peking. Apparently in China they gather in different homes to pray; you might say it is like the early years of Christianity, or like fairly recent in times Russia. And this is extraordinarily touching. Really, it reminds me of the seventies and eighties in Moscow, when young believers gathered to pray, read akathists, always rushing to pass along to each other what were then rare Christian books, to get together… I saw in China today that same pure and radiant neophyte spirit… And they say that there is a huge number of such “house churches” all over China.

Most of the young people interested in the faith are picked up and lead to their faith by Pentecostals and Catholics. To be honest, they are struggling very courageously in those faiths…

—Are their activities also illegal?

—Their mission can be complicated at times, but unlike attending the Orthodox church, it is not illegal.

Of course, for us the Protestant way of doing things is somewhat novel. They say, “We are going to praise Christ!” and head off to the park with a guitar. We can imagine these Protestant songs: often poetically naïve, sometimes utterly simplistic, but sincere. Well, the Chinese Christians sing these songs in the parks and on the boulevards. Crowds of young people gather around them, and they ask about things with lively interest. Then someone passes around Holy Scripture on reprinted brochures. They answer questions, invite them to gatherings… This is not against the law. In any case, I did not see any actions against it by the authorities. 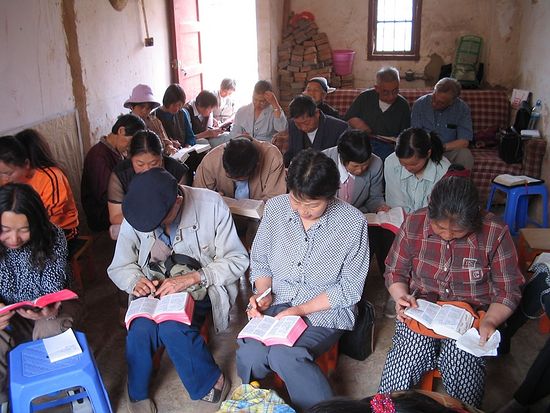 A group of Christians studying the Bible in China.
The Chinese’s interest in Christianity is, without exaggeration, enormous. We—Hieromonk Paul (Shcherbachev) and I—met with Chinese governmental officials, and they confirmed that they foresee a very serious future for Christianity in China. In their opinion, the pragmatic and materialistic development vector in their country has reached a dead end. Many Chinese understand that their lives need a completely different vector, a spiritual one. And many see the solution in Christianity.

According to various data, from seven to ten percent of the Chinese are Christians. This is an amount roughly equal to the population of our own country [Russia]. Officially, it is accepted like this: At the end of 2006, the head of the State bureau of religions Ye Siou Ben informed the information center that the number of Christians in China has reached 130 million (and there could be more recent data). It also must be taken into consideration that these are mainly young or medium age people. There are no exact statistics, but according to various data the number of Christians in China increases by one to three million every year.

—Is there any missionary work being done in China now?

—As far as I know, there is Archpriest Dionysius Pozdnayev [of the Moscow Patriarchate] and Hieromonk Damascene (Christensen) [of the Serbian Orthodox Church] who go there. But if we are talking about heterodox missions—many of them are coming from Russia, mainly Pentecostals. Christian doctors or small-scale businessmen go there consciously to combine their work with preaching. 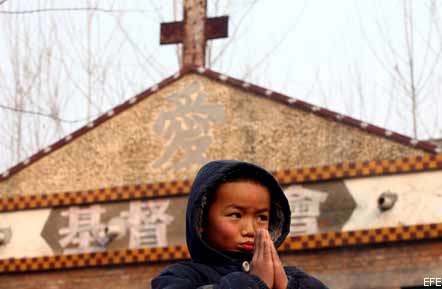 There is a real—not renaissance, you can’t call it that—but a real discovery of Christianity happening in China. It is a real pity that we, for whom this matter is more important than for anyone else, have practically no participation in this.

And there is a real, serious interest in Orthodoxy there. Protestants and Catholics have told me that they are praying the Jesus prayer and seeking Orthodox literature in hopes of learning more about the Orthodox experience of communion with God… So, the Chinese young people’s sincere striving for faith has had the greatest impression on me and been the greatest—I am not even afraid to say the word—shock that I have experienced in recent times.

...
Предыдущий Следующий
Комментарии
Войдите через FaceBook ВКонтакте Яндекс Mail.Ru Google или введите свои данные:
Simone 9 января 2013, 00:00
This is the most wonderful thing I have read for a long time, as I am English and our country is becoming more and more materialistic and far away from God. It is wonderful to see these people who are so thirsty for God, and it has given me new hope.