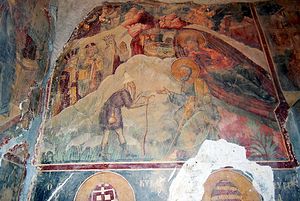 Several frescoes by a master painter were vandalised and some of their parts stolen from a 16th-century Orthodox church in southern Albania, an official said Wednesday.

"Several frescoes were savagely damaged with axes and knives while some of their parts were stolen," Arber Kadija, a culture ministry official, told AFP.

Fragments of the wall paintings were found on the ground at the Saint Paraskevi church in Vlash, a small village some 60 kilometres (35 miles) south of the capital, Tirana, Kadija said.

Police were investigating whether the incident was linked to illegal art trafficking or "an extremist act", he added.

The historic church was vandalised twice, on December 31 and January 4, Kadija said. It was unclear why the damage was not reported earlier.

Art historian Auron Tare called the destruction of the frescoes a "most serious crime".

Most of the frescoes, created by Albania's best-known icon painter, Onufri -- renowned for the intensity of his colours and his humanist scenes of Orthodox iconography -- were "badly damaged," he said.

But Tare noted that the perpetrators neglected to steal the church's most prominent fresco depicting the Virgin Mary and baby Jesus.

Most of Albania's 2.8 million inhabitants are Muslims. Orthodox and Catholic Christians make up around 17 percent of the population.

In the past two years, more than 20 Orthodox churches and monasteries have been looted, according to Gentian Stratoberdha, an official of the Albanian Orthodox Church.

He insisted that the authorities should do more to protect some 170 Orthodox shrines in Albania.

Since the fall of communism in the 1990s, more than 2,000 icons and hundreds of works of art have been stolen from museums, archaeological sites and churches in Albania.

In 2008, 18 icons were taken from the Byzantine church of Saint Mary in the southern town Labova. The perpetrators have never been found.

In 2011, the government allocated some 200,000 euros ($266,000) for the protection of the country's cultural heritage, to the dismay of experts who said the amount was insufficent.