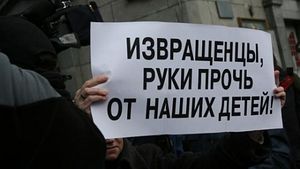 A protest sign reading, "Perverts, keep your hands off our children!"
An attempt by Russia to protect the nation's youth from homosexual exploitation has provoked threatening language from a homosexual German minister and warnings from the European Union, according to local and international media.

The eurocrats' ire has been provoked by a new law recently given a preliminary approval by the Russian Duma on January 25, which prohibits the "promotion of homosexuality among minors," and stipulates a fine on citizens of up to five thousand rubles (about 165 USD), and a fine of up to 500,000 rubles (16,650 USD) for corporations and other "legal entities."

The law, which passed by an overwhelming majority of 388-1 with one abstention, is one of several being examined currently by the Duma to protect young people from sexual exploitation and fortify public morals. The national measure is reflective of similar laws that have been recently passed at the provincial level in Russia.

The movement to ban homosexual advocacy is an example of generalized resistance among Slavic countries to western Europe's and the United States' intense promotion of practices those nations consider sexually deviant.

The Russian province of Novosibirsk, which proposed the law to the Duma, notes that the "the promotion of homosexuality in modern Russia has taken on a wide scope. Such propaganda is promoting homosexuality as normal behavior through the media and through active community action. It is especially dangerous for children and young people, who are not able to critique the avalanche of information that they receive every day."

Germany's openly homosexual foreign affairs minister, Guido Westerwelle, has spoken to Russian's ambassador to Berlin, Vladimir Grinin, claiming that he is "personally disappointed" by the bill and has warned him that its approval would "complicate the relationship between Russia and Europe," according to the Italian newspaper La Stampa.

"The implementation of this law could reinforce discrimination against lesbians, gays, bisexuals, transsexuals and intersex people as well as all those who support them and their choices, in particular by limiting their freedom of expression and their freedom of association and assembly," she said on Wednesday.

"We live in Russia, not Sodom and Gomorrah," said Sablin before the vote. "Russia is a country thousands of years old, founded on its own traditional values, the protection of which is dearer to me than even oil and gas."

His sentiments are broadly shared by Russians, who support prohibiting homosexual propaganda by a majority of 86 percent, according to a recent nationwide poll by the government's All-Russian Center for the Study of Public Opinion (VTSIOM).

The same views have been expressed repeatedly by leaders of the Russian Orthodox Church, as well as Islamic and Jewish authorities in the country.