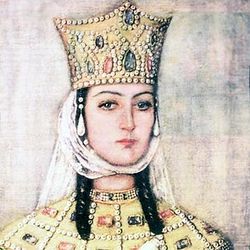 Patriarch Ilia II of All Georgia announced during his sermon on Sunday that the Georgian Orthodox Church has declared 2013 the year of Queen Tamara, reports Trend.az.

The Patriarch said tgat 2013 is, as most historians believe, the 800th anniversary of Georgian queen's repose. Although other theories exist regarding the exact year, the Georgian Church has decided to set the celebration for this year.

Queen Tamara is one of the most revered saints of Georgia. Her reign was the most successful period in that country's history. Unfortunately her grave has not yet been discovered.