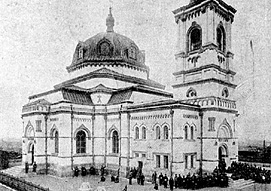 Nicholai-do cathedral, Japan.
According to the revised constitution of Patriarchate of Moscow, China and Japan are part of its canonical territory.

The document was adopted by the Bishops’ Council, which took place in Moscow on February 2–5 and was published on the website of the Russian Orthodox Church on Tuesday.

Russia, the Ukraine, Belarus, Moldova, Azerbaijan, the Baltic States and the States of Central Asia are also included as countries forming its canonical territory (all these countries, except China and Japan, had been included in the previous version of the constitution).

The pastoral activity of the Russian Church in China began in the 17th century, when a Russian priest, Fr. Maxim Leontiev, arrived in Beijing. The Russian mission in China was established in 1713. Orthodoxy came into China through the labors of Russian missionaries.

On November 23, 1956, by decision of the Holy Synod, all Orthodox churches in China were handed over to the jurisdiction of the Orthodox Church of China, which was granted autonomy, with approval of the election of its head by the Patriarch of Moscow and all the Russias.

In 1997 the Synod of the Russian Church stated that since the Church of China did not have its own chief hierarch, the Patriarch of Moscow and all the Russias would be responsible for the canonical care of its flock, until an election by a Local Council of the Church in accordance with Orthodox canon law.

The background for the establishment of the Russian mission in Japan was the opening the Russian consulate there in 1859 and the appointment of Joseph Goshkevich as the first consul in the town of Hakodate. A doctor and an Orthodox priest, Fr Vasily Makhov, accompanied him for the care of consular staff. Owing to illness Fr. Vasily had to return to Russia in 1860, and a new clergyman was appointed in his place. This was the future enlightener of Japan—St. Nicholas (Kasatkin), Equal-to- the-Apostles.