The Monastery Zographou on Mount Athos celebrates its patronal feast 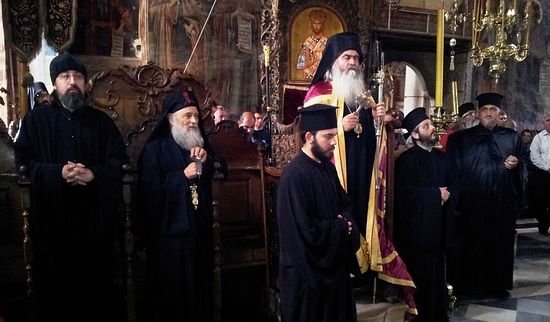 On May 9, 2013, the Athonite Bulgarian Monastery Zographou celebrated its patronal feast--the commemoration of Holy Great-Martyr George the Victory-Bearer. This year the Spiritual Council of the Zographou Monastery decided to postpone the celebrations from Monday to Thursday of Bright Week, reports the website of the dependency of Patriarch of Moscow and all Russia in Sofia and the communication service of the Department for External Church Relations.

On invitation of the Holy Epistasia of Mount Athos and Metropolitan Kirill of Varna and Veliki Preslav, the head of the delegation of Holy Synod of the Bulgarian Orthodox Church, Archimandrite Philip (Vasiltsev), Rector of the Dependency of the Russian Orthodox Church in Sofia, the representative of Patriarch of Moscow and all Russia at the Bulgarian Patriarch, and Hieromonk Zotik (Gaevsky), the Dependency's secretary, took part in the celebrations.

The evening before the event the small Vespers was celebrated. Then, following an Athonite tradition, the All-night Vigil Service was celebrated with the Divine Liturgy immediately following.

Metropolitan Kirill of Varna and Veliki Preslav celebrated the Liturgy with the Superior of the Zographou Monastery Archimandrite Ambrose, the Rector of the Patriarchal Dependancy in Sofia Archimandrite Philip (Vasiltsev), representatives of Athonite Monasteries, brethren of the Zographou Monastery who are ordained to the priesthood concelebrating.

Several hundreds of pilgrims from Bulgaria, Greece, Russia and other countries took part in the celebration of the patronal feast of the Zographou Monastery.