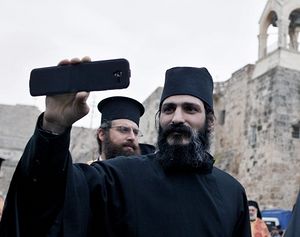 Photo: ITAR TASS
The head of the Russian Orthodox Church has urged monks not to use cellphones to access the Internet in order to avoid temptation.

"Now the Internet appears to be a great temptation," Patriarch Kirill said during a trip to the Zograf monastery in Greece, according to a transcript of his remarks posted on the church's website.

"Many monks act, in my view, quite unreasonably. On the one hand, (monks) leave the world in order to create favorable conditions for salvation, and on the other hand, they take their mobile telephone and start to enter the Internet where, we know, there is a large number of sinful and tempting things."

The monastic tradition is by definition strict and does not need to adapt to modern conditions, he said.

Kirill has in the past warned against "manipulation" on the Internet but an Orthodox Church official, speaking on condition of anonymity, has said the patriarch does use it himself to seek out information.

A Facebook page dedicated to Kirill was launched last year to feed growing interest in a religious leader who has openly supported President Vladimir Putin. Putin has portrayed the church as the guardian of Russia's national values.

The Russian Orthodox Church has enjoyed a resurgence since the end of atheist Soviet Communist rule in 1991. About three quarters of Russians consider themselves Russian Orthodox.