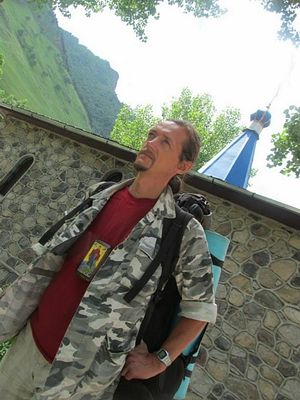 The traveler and journalist Alexander Voloschuk is preparing to walk in a religious procession over the north Caucasus, central Asia, Mongolia, China and Indo-China. With the blessing of Bishop Theophylact of Pyatigorsk and Cherkessk, the expedition is part of the international Cross Procession devoted to the 1025th anniversary of the Baptism of Russia, and will last till January 2014, reports the diocese's website.

The expedition, for which Alexander has been preparing for two years, will be dedicated to the Mozdok Icon of the Mother of God. Over the entire route, which encompassed regions of the North Caucasus, Kazakhstan, Kyrgyzstan, Uzbekistan, China, Laos, Cambodia, Vietnam, Thailand, Mongolia and China, Alexander will wear the icon of the Mother of God on his chest, trying as best he can to make the expedition a preaching of Christianity.

Alexander is planning to collect material for his new book about travelling to Orthodox Holy sites of Russia, Kazakhstan, Kyrgyzstan and other countries. As during his former expeditions, the Alexander will travel only on foot and by hitchhiking.

A historian by education and a journalist by profession, Alexander Voloschuk began hitchhiking in 2002. He visited 22 countries, familiarized himself with 623 towns and cities of the world. The total distance he has covered is 177,000 kilometers.

Alexander writes down impressions of his travels in his diary on which his books are based, these books are: Hitchhiking to the End of the World, The Northern Odyssey, Towards the Sun, and The Caucasian Diary.