“From Ocean to Ocean” icon pilgrimage across US, Mexico emphasizes Sanctity of Life 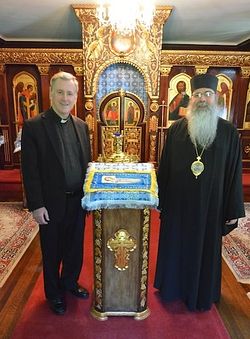 Metropolitan Tikhon offered his support to the project, noting that OCA parishes interested in arranging a visit of the icon or to participate in related events are encouraged to contact Human Life International at hli@hli.org or 1-800-549-LIFE, where they may make arrangements directly.

The “From Ocean to Ocean Campaign in Defense of Life” aims at encouraging the faithful to offer prayers to the Mother of God for the restoration of a Culture of Life. It also serves as a public symbol of support by both Catholic and Orthodox Christians for the cause of human life. The international site for the campaign http://www.fromoceantoocean.org/ is available in nine languages, including Russian. The North American site, which has a promotional video and a regularly updated schedule, is at http://www.hli.org/oceantoocean.

The program was initiated by an Orthodox Christian pro-life demographer from Moscow (See http://demographia.ru/), Dr. Igor Beloborodov, and the Polish affiliate of Human Life International, which is led by Ewa Kowalewska. Having organized numerous pro-life rallies in Moscow and in other Russian venues, Dr. Beloborodov and Mrs. Kowalewska decided to begin the peregrination in Vladivostok, Russia and proceed to Fatima, Portugal, with a copy of the Czestochowa Icon of the Mother of God, which for centuries has been revered by Orthodox Christians and Catholics alike. The pro-life leaders then collaborated n forming a multi-national organizing committee which met in Czestochowa, Poland. The project has exceeded everyone’s expectations—at the present time, the icon has completed its trip from Vladivostok to Portugal, traveling 65,000 kilometers through 24 countries.

Due to the unprecedented success of this effort to promote human life, it was decided to bring the icon and campaign to North America, before continuing on to Central and South America and around the world.

The icon will begin its US journey in Maryland on Saturday, August 24, 2013 and will continue until the Fall of 2014 before the icon continues to Mexico. The nature of the services will be generally decided by the host parishes, within the restraints imposed by the schedule. However, the prime object will be pray to the Mother of God for the defense of human life and the end of abortion. Local pastors will be provided with an excellent opportunity to speak about the importance of human life to their parishioners.

Among those endorsing the program is His Emininence, Metropolitan Hilarion [Alfeyev] of Volokolamsk of the Russian Orthodox Church.

Those looking for more information or who would like to invite the campaign to their church are should visit http://www.hli.org/fromoceantoocean or call 1-800-549-LIFE.