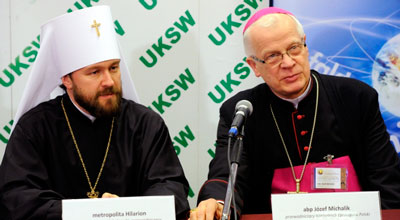 Leaders of the Polish Catholic and Russian Orthodox Churches have issued an unprecedented joint plea to European Christians to defend their traditional values and Christian roots.

“When looking at the challenges of today’s world, we see more issues that unite us than divide us,” said the head of the Polish bishops’ conference, Archbishop Józef Michalik, after a meeting with Metropolitan Hilarion, the chairman of the Russian Orthodox Church’s Department for External Church Relations. The meeting was a part of a conference in Warsaw entitled “The future of Christianity in Europe. The role of Churches and nations of Poland and Russia”.

Metropolitan Hilarion expressed his uneasiness about the EU, likening it to the Soviet Union, which sought to eliminate religion. “There is an ideology that triumphs in the European Union now but it contains some elements completely incompatible with the Christian values,” he added, pointing to “the promotion of abortion, euthanasia and same-sex relations,” as well as attempts to remove religious symbols from public places.

“We all remember the Soviet times, when we were forced to follow the atheist state ideology, he added. “However, there is another dangerous ideology ruling in the European Union now and we should not follow it blindly.”

Archbishop Michalik said the Russian Orthodox Church offered “a fresh viewpoint that we urgently need”. “We have to wake up and to be able to say that not everything [in Europe] goes in the right direction."

The conference was the first fruits of a landmark reconciliation meeting last August between when the Russian Orthodox Patriarch, Kirill, and Archbishop Michalik.

Meanwhile, the Moscow Patriarchate called on the Orthodox countries in Europe – Russia, Ukraine, Belarus, Moldova, Greece, Serbia and Bulgaria – to demand that the EU change some of its values, as well as the Western model of democracy.

According to Moscow Archpriest Vsevolod Chaplin, any negotiations with the EU should begin “with a question as to how the EU is ready to change to be able to become a common house not only for the Western, but also for the Eastern socio-political tradition on a parity basis, not with docile hearing of someone's instructions.” He mentioned the issues of same-sex marriage, secularisation, euthanasia and a lack of support for the traditional family values. 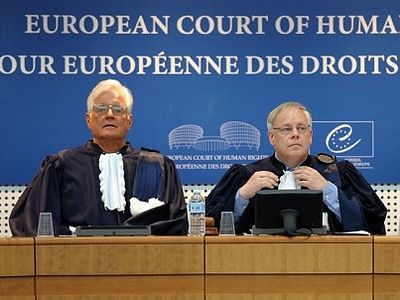 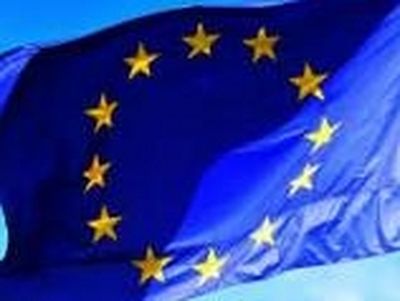 10 of 13 Newest EU States Reject 'Gay Marriage' Since 2004, 13 nations have joined the European Union and 10 of them either prohibit or do not recognize homosexual marriage, while the remaining three allow some legal "partnership" recognitions but not on the same level as heterosexual marriage.
Комментарии
Войдите через FaceBook ВКонтакте Яндекс Mail.Ru Google или введите свои данные: