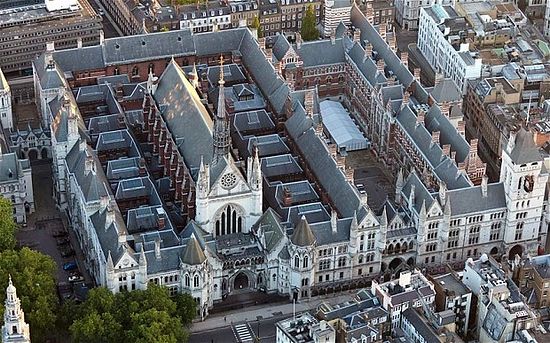 The case is being heard at London's High Court. Photo: REX FEATURES

Gay and lesbian rights activists are seeking to be the new “moral enforcers” and it is Christian religious conservatives who now need protection to be allowed to dissent against “the new orthodoxy”, it was claimed.

Core Issues Trust, a Christian charity, is challenging a ban on its London bus advertisement reading: “Not Gay! Ex-Gay, Post-Gay and Proud. Get over it!” It was a response to a bus poster campaign by gay rights group Stonewall carrying the message: “Some people are gay. Get over it!”

Paul Diamond, for the charity, told appeal judges that at the heart of the case was the “ironical” situation in modern British society where ancient Biblical scriptures, which played an important role in forming the nation’s morals, were now in danger of containing views which could no longer be expressed “in a land with a reputation for free speech”.

Mr Diamond said Christian scriptures only permitted sexual relationships between one man and one woman in marriage and people should be entitled to express that view. He said the case raised the question: “Is the belief that homosexuality is a sin worthy of respect in a democratic society?”

The charity accuses the Mayor of London Boris Johnson of unlawfully using his position as chairman of Transport for London (TfL) to obtain the ban in order to secure the gay vote and advance his 2012 re-election campaign.

High Court judge Mrs Justice Lang rejected the claim in March, ruling: “In my view, such unlawfulness has not been established on the evidence.”

Mr Johnson said the advertisement was “offensive to gays” and could lead to retaliation against the Christian community.

Mr Diamond is appealing that an “email trail” not disclosed by the mayor’s office at the High Court, and discovered later following a freedom of information request, supported its claim over Mr Johnson’s role in banning the advertisement.

The trust says its works with gay people seeking to change their lifestyles, but rejects the idea of offering a gay cure.

It is asking the appeal judges to uphold its right to freedom of expression under Article 10 of the European Convention on Human Rights, which it says has been violated by the ban. It is also relying on Article 9, which protects the right to freedom of thought, conscience and religion.

Mrs Justice Lang ruled TfL’s decision-making process “fell below the standards to be expected of a responsible public body,” but the trust’s Article 10 rights were outweighed by the rights of gays to respect for their private and family life under article 8(1). She said TfL was legally justified in imposing the prohibition because the advertisement would cause “grave offence” to gays and “increase the risk of prejudice and homophobic attacks”.

Mr Diamond argued there was “nothing aggressive” in the advertisement. “We were simply trying to engender a debate. People don’t have the same views. There is an alternative.”