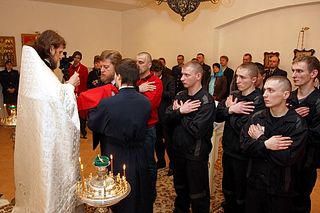 The Patriarchate of Moscow and the Russian Federation's Federal Service of Execution of Punishments (FSEP) in Moscow have signed an agreement, which allows priests to visit inmates in investigation isolators, reports ITAR-TASS.

On behalf of His Holiness Patriarch Kirill of Moscow and All Russia the agreement was signed by Archbishop Arseny of Istra. He thanked the chief of the capital's FSEP for bringing up the question on the legal position of the clergymen who visit investigation isolators.

"The Patriarchate of Moscow includes the Diocese of Moscow, and, like other dioceses of our country, it labors in the sphere of care for those who have lost their freedom or are carrying out their sentences. I hope that those years of the clergy's ministry will be appreciated positively, and now (in this agreement) all those clauses are described in detail, as these are state institutions and they have their own orders and terms, which must not be breached," said Archbishop Arseny.

In the agreement, according to the Hierarch, the Patriarchate of Moscow undertakes to follow all these statutes, while the FSEP administration undertakes not to impede celebration of services and spiritual care for those individuals who will wish to meet with a priest and to receive a spiritual guidance.

In his turn, one of the developers of this agreement, chairman of the Synodal Department of the Patriarchate for Ministry in Prisons Bishop Irinarch of Krasnogorsk has informed, that "the agreement, first of all, stipulates giving spiritual and pastoral care for convicts, but not only this. It also includes care for staff members, who work in FSEP institutions, as well as students, who are studying today but tomorrow will come to work in this field".

"Ministry in prisons in the Russian Orthodox Church is many-sided. Today we are speaking, first of all, about clergymen’s access to penitentiaries. But there are also re-socialization issues. A person can spend here one month, two, six months or even more. And during this time the atmosphere has an affect on the person. He or she may give in psychologically, his or her health may fail, and so on. And when the person is released (if he or she does not receive a sentence), then he or she will need preparation for civil life, too. And our task is to render them a spiritual, psychological, and sometimes even material support," he noted, adding that staff members themselves need some support.

"And this is where the Church certainly must help, and we are trying to put all this into life and to meet the needs of our citizens, who by chance or by fate have ended up in places that are not so far away," stressed the Hierarch.

In his turn, the FSEP chief Anatoly Tikhomirov noted that inmates need the Church’s help very much. "When an individual oversteps the limits and finds himself in an institution of confinement, he finds himself under great stress. If at large he had not early reached for God, after coming here he looks for help, some kind word," said A. Tikhomirov, speaking about the role of the clergy in investigation isolators.

He has noted that FSEP and the Russian Orthodox Church have settled good relations with each other. "Our staff members are not deprived of the Church’s attention—they attend the same churches. As they say, we are together in both trouble and joy," he added. 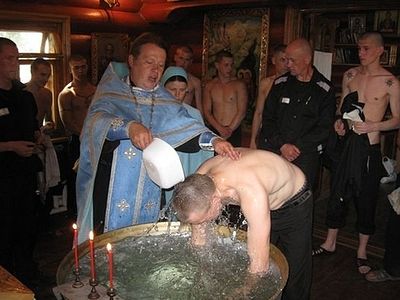 Inmates of two penal colonies receive Baptism Clergymen provide pastoral care to the churches located in these penal institutions. On one of these visits, an important Church Sacrament, Baptism, was performed in the penal colonies of the Russian Federal Service of Execution of Punishments Administration in the Arkhangelsk region. 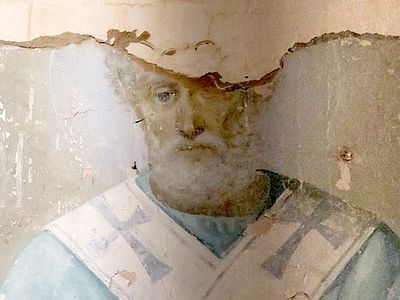 Mercy is Living for the Sake of Repentance Andrei Salnikov

Mercy is Living for the Sake of Repentance Andrei Salnikov There isn’t an Orthodox church in Russia that does not have an icon of St. Nicholas. His image appears also on the wall of a church that was once the main cathedral of the St. Kirill of Novozersk (New Lake) Monastery on Ognenny (Fiery) Island in Novozersk (Belozersk region). The Monastery has long been occupied by a penal colony, and in 1990 they began sending here those who have been given life sentences. 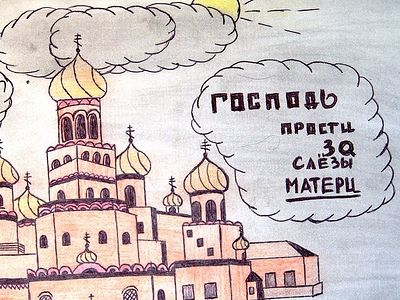 Grisha the Terrorist, Saad, and “Polar Bear”. Conversion in juvenile detention Deacon Peter Pakhomov, Tatiana Boriskina There were many leaders of radical teenage gangs—they are the ones who would eventually attend every class. They could not understand what was happening to them; I had to call them for individual discussions, to explain, and there were often disputes in the groups on this subject. Later many were baptized and escaped from their former demonic state.