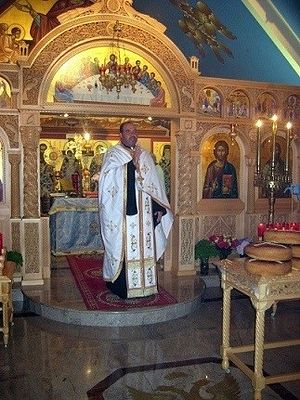 Father Dimitrios Moraitis in a New York Church
A unique, pioneer work, based on a doctoral project, presents the Orthodox perspective to addiction through the eyes of Father Dimitrios Moraitis, drawing upon religious, administrative, scholastic and social sources. His Eminence, Metropolitan Gerasimos of San Francisco, explains in the book’s foreword that “with a substantial bibliography, the work constitutes a compelling argument, as well as a timely opportunity, for the involvement of clergy and other religious workers in our ongoing efforts to seek reintegration of the addict into the church community.”

The 179-page book seeks to define alcoholism and examine the causes of addiction from a theological perspective and offers clergymen advice on how to work with addicts. Father Moraitis believes “recovery from addiction is more of a spiritual exercise than anything else and people in recovery are generally on a wonderful spiritual journey that can be enhanced by the priest and the church community and the recovery person can also enhance the church community,” (Part 1, p.20).

The author addresses a major point in an alcoholic’s recovery. How does one administer Holy Communion to an alcoholic in complete abstinence of alcohol? On page 55, the theologian addresses this issue. Father Moraitis lists and describes twelve core competencies for clergy. They include: definition and societal stigma; knowledge, signs, withdrawal characteristics, effects on individual and family and characteristics of recovery stages; awareness of indicators of disease; spiritual and religious recovery; early intervention; pastoral interactions with addicted person and network; positive communication; utilize community resources; knowledge of twelve step programs; address values and attitudes of alcohol and drug dependence; cultivate positive support from community and prevention strategies that benefit community.

Father Moraitis’ book is easy to read. His candor and incisive statements keep the reader’s attention. “All things must come to an end,” said the author. The alcoholic/addict will either get sober, end up in a psychiatric institution or die…Finally there is a spiritual rock-bottom, which comes as a result of a person realizing that they are dying spiritually. This is the result of the alcoholics and addicts awareness that they have truly distorted the image and likeness of God in themselves,” (pp. 87-88).

Many persons say why me, blaming God for their problems and consequences. Father Moraitis believes one has free will to get sober or to remain addicted, explained on page 89. The author believes the priest must be active in the recovery process of the addicted Orthodox Christian, helping in the return to the sacramental life of the church, as described on page 148.

Father Moraitis hopes his study will spark dialogue between clergy and addicts. His research can be a guide to all on the unique spiritual and biological aspects of recovery from destructive behavior. The book inspired this reviewer to think about “the Greek influence on life after death”, an article written by Rabbi Marc Gellman in Newsday, June 1, 2013. He says that a soul survives the death of the body through God via Aristotle. As Rabbi Gellman reminds us how after the conquest of Israel by Alexander in 333 BCE, a period called Hellenism began which brought Greek philosophy into contact with biblical Judaism through the scholar/teachers called rabbis, who unlike the biblical priestly class, were drawn to Greek philosophy as a new source of divine revelation. All this should remind us that the greatest advances in religious thinking happen only when religious people take seriously the best of what the secular world are learning and teaching about the nature of human existence. Father Dimitrios Moraitis does just that, taking the best information and services of the secular community to create a masterpiece of Orthodox ministry to the alcoholic and addict. 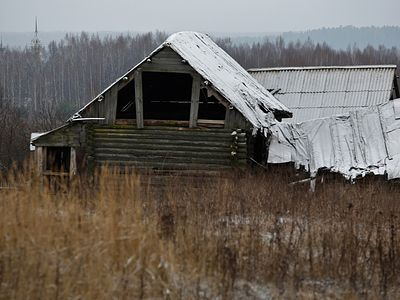 Russian Orthodox Church helps to rehabilitate drug addicts The parish of St. George is located in a remote village in Ivanovo Region. It is one of 60 drug rehabilitation centers in Russia run by the Russian Orthodox Church. Only 12 people live here – four priests and eight recovering drug addicts from Moscow, St. Petersburg, Novosibirsk and Tomsk. The center tries not to take addicts from nearby towns, in case they begin to think of running away. 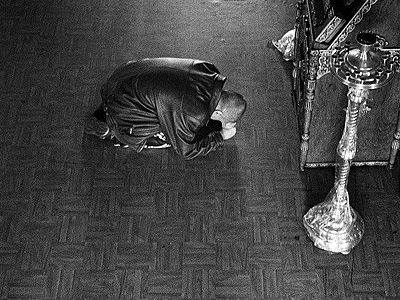 “Leaving the Church makes it very easy to fall off the wagon.” Confessions of a Former Drug Addict and a Former Alcoholic

“Leaving the Church makes it very easy to fall off the wagon.” Confessions of a Former Drug Addict and a Former Alcoholic Alexandra Borovik Lent began a few days later. I started fasting. And I started to use less, stepping down to “lighter” drugs. I was very afraid of using again. I was most fearful at night. In this way I made it through Lent.

"You Know Where to Go!" St. Xenia of Petersburg comes to Oakland Nun Cornelia (Rees) Our biker rode off on his Harley Davidson, and soon had a terrible accident, which cost him his legs. Eventually he landed back in the company of his old “friends”, in a run-down apartment in a low-rent neighborhood in the bad part of a crime-ridden city.
Комментарии