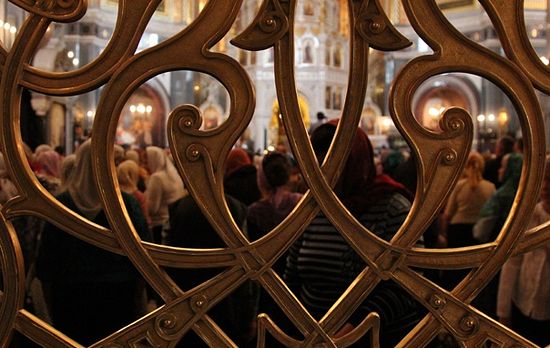 I read yesterday something by the Orthodox priest Father Andrew Stephen Damick that brought together a couple of things I was talking about on the blog yesterday: specifically, the case of the gay Greek Orthodox man who is outraged that a priest wouldn’t give him communion, given that he, the layman, believes that he is a “good person,” and the most recent post I did on Paradiso, in which I discussed the importance of cultivating the right attitude towards learning truth — including working on the ability to abide patiently in love until things become apparent to you. Fr. Damick writes:

Because Orthodoxy comes with a vast set of expressions of its tradition, you can never exhaust it all. There is always something new not just to learn but to become. While we don’t really “arrive” until the next life (and I’d argue even that is not an arrival; that is, it’s not the end of the road of salvation), there are many way-stations in this life that delight and grant joy. The difference between Orthodoxy and Evangelicalism in this regard is that I’m talking about not just growing in wisdom, which is common to all religious traditions, but that Orthodoxy tracks many stages of spiritual development throughout a whole lifetime.

I remember one time hearing a monk explain the response he got from a holy elder on Mount Athos after asking him many questions. The elder replied that some things just wouldn’t make sense to him until later, until he’d received some level of illumination (theoria). It’s true. One cannot read a “Statement of Faith” from Orthodoxy (not even the Creed) and say, “Ah, yes. That is everything Orthodoxy teaches. I understand it now.”

Again, that’s not a bug. It’s a feature. Yes, we like things to be simple, to be readily accessible to everyone, but any faith that is not complex enough to address all the complexities of human experience is not worthy of the dignity of mankind. Orthodoxy provides that in a way that I haven’t found anywhere else.

There seems to be a constant battle these days, especially within Protestantism, over whether God should be perceived as loving or as a judge. Even those who preach that God is love still tend to preach a God Who is angry at you for your sins and has to be appeased. But Orthodoxy preaches the God Who is consistently loving, a God Who loves with such strength that His love will change you, if only you will cooperate with it. The change won’t be lousy, either, turning you into some goody-goody prude. Rather, it will be a change into authentic personhood, where virtue is striven for because of communion, not because of adherence to arbitrary rules.

I do not use this blog to proselytize for Orthodoxy, and will not. Please do not read this as opening up a discussion about whether Orthodoxy is true, or not. That is not a conversation I’m interested in having, or hosting on this blog. I post these excerpts from Fr. Damick’s essay because they illuminate themes we were talking about yesterday.

First, on the matter of the dissenting Greek. He grew up in the Orthodox Church, but on evidence of his writing, he never understood Orthodoxy as anything other than the tribe at prayer (or more precisely, the tribe at prayer before getting to the real stuff, which is coffee hour, Greek festival, and so forth). That is, he doesn’t give any evidence that he understood Orthodoxy as the means God gave us to transform our lives to become more like Himself, and therefore to move toward unity with Him. Here’s the key thing: Orthodoxy is a way, not a destination. If you do not experience Orthodoxy as a constant pilgrimage toward theosis, then you are missing the essential meaning of the Orthodox faith.

Pappas, the angry Greek man, sees the Orthodox Church as something that exists to make him feel good about himself, and a part of the community. From his Washington Post column:

I’m no activist. I don’t want to have a “big, fat, Greek gay wedding” in my church. I’m not going to march outside the Archdiocese headquarters. I love it the way it has always been—a place of love and compassion, a community of good, hard working people and an institution that realizes that we’re all broken in one way or another, and the church’s sacraments should be celebrated to heal us and make us whole. Because, while I may not be a biblical scholar, I believe I’m a good person; my Church taught me how to treat my fellow human, how to be compassionate and, more importantly, the difference between right and wrong.

Emphasis above is mine, because it’s the critical point: Pappas doesn’t see himself as broken and in need of healing, not as regarding his sexuality, or, apparently, anything else, given that he believes he’s a “good person.” Judging from his self-description on his blog, he’s a man who is passionately in love with being Greek (who could blame him?), but the Jesus thing, well, it’s not there. This Moralistic Therapeutic Deism is all so far from Orthodoxy it beggars belief. It appears from his blog that Pappas is a good Orthodox Greek, insofar as he is a joyous and faithful servant of Greekness, but his Greek Orthodoxy seems — again, only judging by his writing — to be on much shakier ground. Pappas’s priest is presumably denying him access to the chalice for his own spiritual good. If he were to allow Pappas to take communion, it would be to Pappas’s own spiritual harm, according to Orthodox teaching.

Let’s imagine, though, that the priest in question made an erroneous pastoral decision. The fact that Pappas narcissistically declared himself to be a “good person,” and therefore entitled to communion, is a clear sign that he is very far from an authentic understanding of Orthodoxy. Furthermore, the fact that Pappas, in his public rant against this priest, pointed to the sins of others as an example of why he should be allowed to receive communion, is another clear sign of how very far from Orthodoxy he really is. Every Sunday, before we receive communion, we say a pre-communion prayer that begins like this:

“I believe, O Lord, and I confess that you are truly the Christ, the Son of the Living God, who came into the world to save sinners, of whom I am chief.”

In this, we reference St. Paul, who in one of his letters declared himself to be the chief of sinners. The idea here is that we approach the chalice not thinking of the sins of others, but of our own sins, for which we are responsible towards God. It is possible, I suppose, that Pappas was treated unfairly. Even if he were, to go onto the Washington Post site and grouse about the sins of others as somehow justifying his own sins is alien to Orthodoxy (besides being tawdry).

As an Orthodox Christian and a great sinner, I have benefited greatly by the Church’s guidance on confronting my own sins, which mostly have to do with pride. It has been difficult. Really difficult. But my spiritual father has not let me fall into self-satisfaction, but rather has kept me going farther into repentance. Under his guidance, and by participating in the sacramental life of the Church, I have had sins I’ve hidden from myself brought to light, and I’ve been given the grace and the impetus to deal with them, and turn from them. This is a process that will continue until I draw my last breath. It is the same way for all sincere Orthodox Christians — sincere, in that they want to be healed from their brokenness, not confirmed in it. Put simply, there is no way, no way in the world, that any true Orthodox Christian can call himself “a good person” and also “the chief of sinners.”

Second, I love what Fr. Damick says about how you can never understand Orthodoxy quickly, or by reading a book. Some things — most things — only become clear to you over time, by faithful practice. This is a hard thing for us Americans to understand, but it’s pretty much the same thing Aquinas, in ParadisoXIII, told the pilgrim Dante. If you want to know the truth — and in Christianity, the Truth is a Person — you have to approach it prudently and methodically, not rush toward it, thinking that your passion will be enough to help you find it. The Orthodox Church has been tending the path toward Truth for 2,000 years. It knows better than we do how the individual soul makes his or her way towards God: through prayer, fasting, the sacraments, repentance, and trusting in the mercy of God. If, in humility, we submit to the wisdom of the Fathers, which is the wisdom of the Church, and abide with the Church in patience and love, then the Truth will eventually make itself clear to us. I can testify that this is true from experience. And I can testify that this is a hard thing to do. But what else is there?

Pappas dwells in the Dark Wood, and expects the Church to tell him he’s in the Garden of Eden. He will be able to find a priest who will do that, no doubt. But if he wants to live, he will listen to the Pittsburgh priest who has drawn down his wrath for daring to be the Greek community’s good servant, but God’s first. 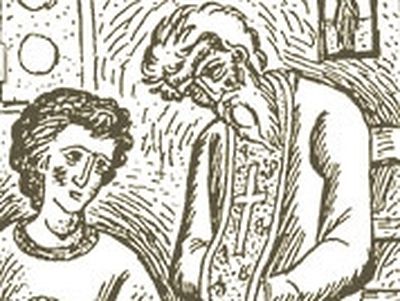 A Guide to Confession

A Guide to Confession Genuine Repentance & Confession heals and makes the immortal soul holy. This is the correct way to prepare for Holy Communion. 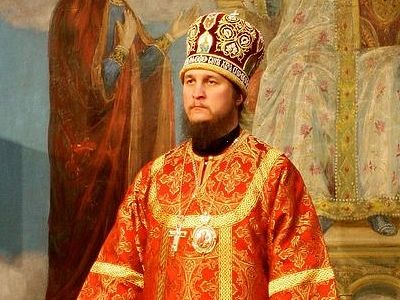 On Preparation for Holy Communion. “We must raise the standard” Bishop Pachomy (Bruskov), Anastasia Rahlina

On Preparation for Holy Communion. “We must raise the standard” Anastasia Rahlina, Bishop Pachomy (Bruskov) As the Lord said in the Gosples, He that is able to receive it, let him receive it (Mt. 19:12): one person may be capable of living an intense inner life, regularly go to church, and continually search his own conscience—as St. Ignatius (Brianchaninov) says, so that their minds would always swim in the Gospels, in the teachings of Christ. Another person might be so inwardly disposed that it is an ascetic labor for him to receive Communion only twice a year. 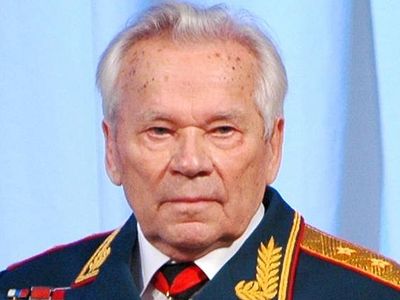 One regret too many – reflecting on one's life

One regret too many – reflecting on one's life “If my rifle took lives, does it mean that I, Mikhail Kalashnikov, aged 93, a peasant woman’s son, an Orthodox Christian in faith, is guilty of those people’s deaths, even if they were enemies?”
Комментарии
Vicky19 июня 2014, 16:00
Beautifully said.
Harrison J. Krenitsky18 июня 2014, 16:00
Remember,in all things we are first and foremost servants in the Truth, Love and Faith of Jesus Christ!