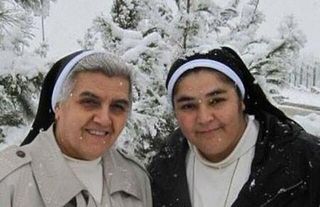 Sisters Miskintah and Utoor
The Assyrian television channel Ishtar TV is reporting that 5 Assyrians have gone missing in Mosul. Two Chaldean nuns from the Daughters of Mary Order, Sister Miskintah and Sister Utoor Joseph, as well as Hala Salim, Sarah Khoshaba and Aram Sabah have not been heard from for nearly two days.

Sisters Miskintah and Utoor managed an orphanage for girls in Mosul, in the Khazraj neighborhood near Miskintah Church. After Mosul fell to ISIS, the two nuns brought the orphaned girls to the city of Dohuk for safety. The Nuns returned late Saturday to Mosul, accompanied by Hala, Sarah and Aram, to inspect the monastery but there has been no contact with them nor any trace of their whereabouts since then.

It is believed they have been kidnapped by Muslims.

Nearly all of the Christians of Mosul have fled the city since it fell to ISIS on June 10. ISIS members bombed an Armenian church which was under construction in the Left Bank neighborhood, near al-Salaam hospital and looted The Church of the Holy Spirit. Two days after taking over Mosul, imposed Islamic law (Sharia) and began collecting the poll tax (jizya) from Christians. On June 21 ISIS members raped a mother and daughter and killed four women for not wearing the veil.

450,000 Christians Flee From Muslim Attacks in the Central African Republic

450,000 Christians Flee From Muslim Attacks in the Central African Republic Apparently over 450,000 people have fled their homes after the Muslim dominated Seleka took power and began persecuting Christians irrespective of the alleged government of national unity during the transitional period. 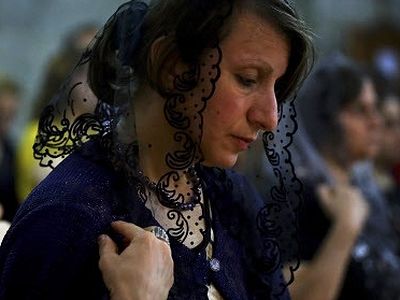 Fisher: Convert to Islam or face the sword, Iraqi Christians told by Sunni extremists Aware of ISIL’s ferocious reputation for murder and mayhem, thousands of Christians who lived in Mosul and the surrounding Nineveh Plain fled in panic when ISIL rebels captured Iraq’s second largest city from government forces on June 10. 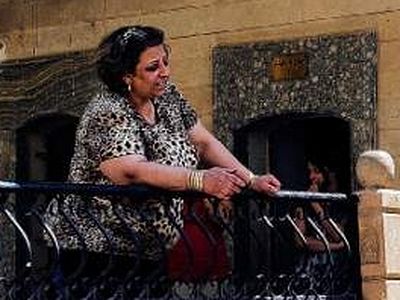 Christians from Mosul seek refuge in ancient monastery in Iraq

Christians from Mosul seek refuge in ancient monastery in Iraq Perched on a rocky, sand-colored mountain dotted with green shrubs and ancient caves, the Monastery of St. Matthew was a sanctuary for some of the earliest Christians.With the fall of nearby Mosul to Islamic extremists, its thick 4th-century walls again are a refuge. 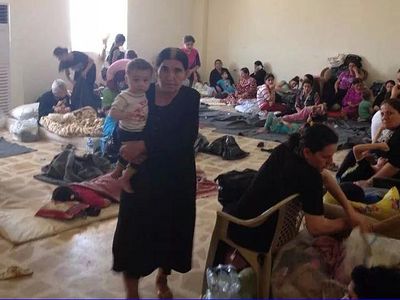 August 18 Report on North Iraq -- Refugees At Great Risk International aid organizations are overwhelmed and cannot provide the required level of relief aid to refugees. There is also gross deficiency in the distribution of aid because of the lack of accurate data on the number refugees and their locations.
Комментарии