Patriarch Kirill Meets with a Group of Orphaned Children from Syria 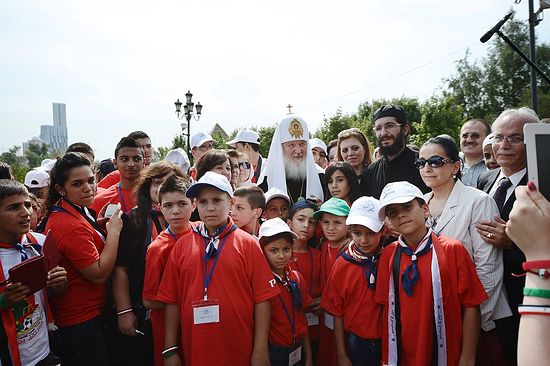 On August 1, 2014, after a Divine Liturgy at the Memorial Church of the Great-martyr George the Victory-Bearer on Poklonnaya Hill in Moscow, His Holiness Patriarch Kirill of Moscow and All Russia met with a group of children from Syria who were staying in a recreation camp in Russia, reports Patriarchia.ru.

Before the meeting a tour of the Victory Park memorial complex on Poklonnaya Hill was arranged for the young visitors.

Patriarch Kirill addressed the children with his speech and gave them keepsakes: 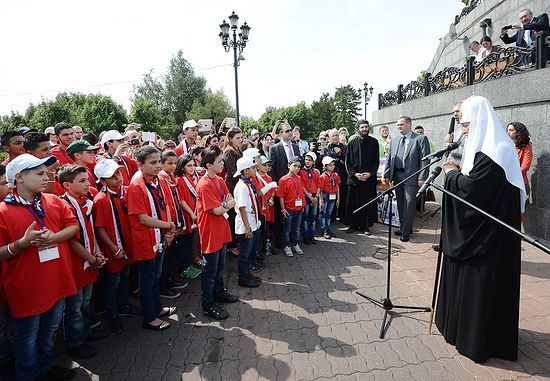 “Dear children! I am very pleased to see all of you in Moscow.

We know what is happening in your motherland – Syria. We are aware of the unjust sufferings of your people, but at the same time we admire the ability of your nation to stand up for your freedom and independence. Your parents, your elder brothers with guns in their hands are defending their motherland, and we admire their courage. However, we realize that very many civilians are suffering – women, the elderly, and especially children. We are helping as far as possible; and we are very glad to receive you in Russia.

You are the future of Syria. You must build a strong and free state so that nobody else should ever wish to destroy it by force. And we do believe that you will succeed in this. Keep faith in your hearts, pray to God, study well in order to really become spiritually and physically strong people.

I would like to express my sincere gratitude to all those who have arranged the Syrian children’s trip and to welcome the nuns and all the laity who are accompanying you. May the blessing of the Lord be with Syria, with all your people and with you, my dear children.”

His Holiness was greeted by the children’s escorts: Archimandrite Michael (Yakub, Abbot of the Monastery of the Holy Theotokos in Latakia (Antiochian Patriarchate) and a member of the Syrian branch of the Imperial Orthodox Palestine Society, and Angela Ganem, headmistress of a boarding school for the children of servicemen killed in Damascus. The First Vice-President of the St. Andrew the First-Called Fund, Michael Yakushev, took part in the meeting as well. 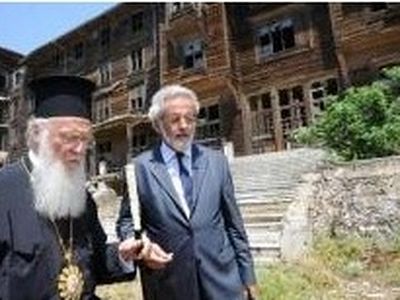 Turkey Reinstates Legal Title of Prinkipo Orphanage The General Directorate of Foundations Council decided unanimously on Wednesday to reinstate the legal title of Prinkipo (Buyukada) Orphanage to the Ecumenical Patriarchate, in line with the ruling of the European Court of Human Rights (ECHR). 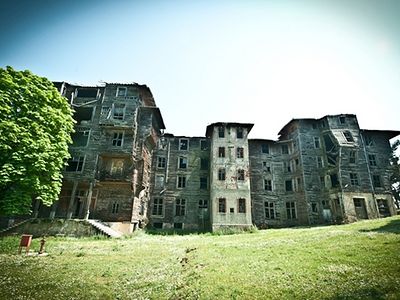 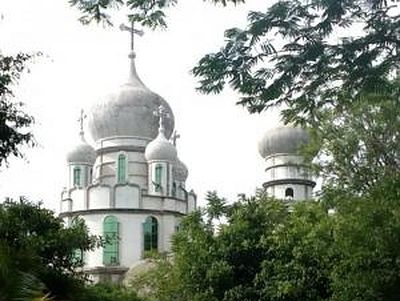 Mission Team Helps Guatemalan Orphanage Relocate to Higher Ground In early June, a mission team from the seminary community, led by Chancellor/CEO Archpriest Chad Hatfield, visited Guatemala to lend much-needed hands to Hogar Rafael Ayau Orphanage. The team assisted in moving the orphanage from "Zone 1," a crime-ridden and dangerous area of Guatemala City, to Hogar San Miguel, a new orphanage in the mountains outside of Guatemala City.
Комментарии