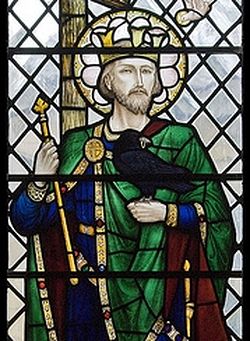 Saint Oswald of Northumbria (604-642) is venerated by English Christians as one of their greatest national heroes and leaders, one of the main apostles of the Orthodox faith in the north of England, as a patriot who loved his people and kingdom, who led a holy life and even became a martyr. The future saint was born in the small kingdom of Deira in northern England. His father, Ethelfrid, became King of Bernicia, another small kingdom in the north. St. Oswald was destined to unite these two kingdoms into one kingdom called Northumbria.

We know very little about the early years of St. Oswald. His father was killed in 616 and young Oswald most probably went into exile in Scotland, where he had close links with the famous monastery on Iona, founded by St. Columba in c. 563. Eventually St. Oswald was baptized on Iona. Some sources claim that he also lived in Ireland for several years. In 633 the Welsh king Cadwallon (only a nominal Christian) in alliance with the notorious pagan King Penda of Mercia killed the saintly King Edwin of Deira—uncle of Oswald—the first ruler to introduce Christianity into northern England (though his missionary work there did not last long).

After that tragic event, St. Oswald, filled with religious zeal, firmly decided to return to his native land to drive the pagan usurpers away and restore a pure and serious Christianity among his fellow countrymen. Before the battle with the pagans, which took place at a place called Heavenfield near Hadrian’s Wall, St. Oswald erected a large wooden cross and fervently prayed before it on his knees, asking the Lord to grant him and his soldiers victory. According to tradition, at that time St. Columba of Iona (who had reposed over 40 years before) appeared to him in a vision and encouraged and predicted victory. The soldiers prayed and promised to accept baptism in case of victory.

The following day by the grace of God St. Oswald’s army defeated the whole army of pagans so that Penda had to leave the battlefield alone. It was a real triumph for the holy king and for the people who were freed from pagan tyrants. It was decided to leave the cross at the same place and later many healing miracles occurred from it. Unfortunately, there were almost no missionaries in the kingdom at that time, one of the few remaining ones was the saintly Deacon James, who preached in York, Lincoln and other places. St. Oswald then asked the brethren of Iona to send him a missionary to help Christianize the region.

The first monk who came to Northumbria was too harsh with the native people, and then it was decided to send a monk called Aidan, whom St. Oswald came to love at once for his kindness, apostolic spirit, humble life and genuine asceticism. St. Oswald gave Aidan (who in the future was to become a great saint) an island called Lindisfarne near the Northumbrian coast, where St. Aidan built a monastery and arranged life on the pattern of Celtic communities. Aidan became Abbot and Bishop of Lindisfarne and it soon became a great monastic and missionary centre. Aidan travelled much throughout the kingdom, walking from one settlement to another, bringing the local inhabitants the Good News. St. Oswald, who knew Irish very well, was for some time St. Aidan’s personal interpreter, as Aidan did not speak the Northumbrian dialect very well. Evangelization was very fruitful, for more and more Northumbrians came to live in Christ and were baptized. As the Venerable Bede writes, meanwhile, King Oswald strengthened in goodness and humility, he was generous in all his deeds, founding many monasteries and churches all over Northumbria.

Once Sts. Oswald and Aidan were sitting at the same table on Easter Day. Servants brought the king the royal meal on a large, silver dish. Suddenly one servant informed him that a great multitude of beggars had gathered in the neighbouring streets, waiting for alms from the king. The king at once ordered all the food to be given to the beggars as well as to break the dish into pieces and give them to the needy. St. Aidan then took Oswald by his right arm and exclaimed: “May this arm be incorrupt forever”. And this prophecy was fulfilled. With time Oswald became the “Overlord” or most powerful ruler in England at the time. Not only Angles, but also Britons, Picts and Scotts were under his dominion. St. Oswald gathered the lands for the Glory of God, not for his own glory, wishing to bring as many people to Christ as possible.

In York Oswald completed the building of the Minster Church, begun by St. Edwin before him. His activities spread to Lindsey in present-day Lincolnshire, where he too was venerated. The king maintained friendly relations with other kingdoms, like Wessex. Thus, he was godfather to King Cynegils of Wessex, who was baptized by the holy Bishop Birinus, and even married Cynegil’s daughter Cyneburgh. Amazingly, St. Oswald combined ruling the kingdom with a very ascetic life: we know from St. Bede that the king often prayed alone in the church from early morning for many hours with his arms outstretched and that he received from the Lord the gift of unceasing prayer (a gift obtained by the Church Fathers). St. Oswald was the most pious, God-fearing and glorious king of Northumbria for eight years. He praised the Lord all the time and strove to do only His will.

At the age of 38, Oswald was martyred by the pagan king Penda—the same Penda whom he had earlier defeated at Heavenfield. Penda declared war on him, and the two armies fought at the battle of Maserfield (this site is identified by many historians with the present-day town of Oswestry in Shropshire). The Christian army lost the battle. St. Oswald, knowing that he was to be killed too, kept praying for his soldiers’ souls and until his last breath he called upon the Name of Jesus. Penda cut off the saint’s head and right arm and hung them on a pole as trophies. (According to tradition, Oswald’s tame and faithful raven placed one of the king’s arms on the tree nearby and it became evergreen, and when it dropped on the ground, a well gushed up from the spot). 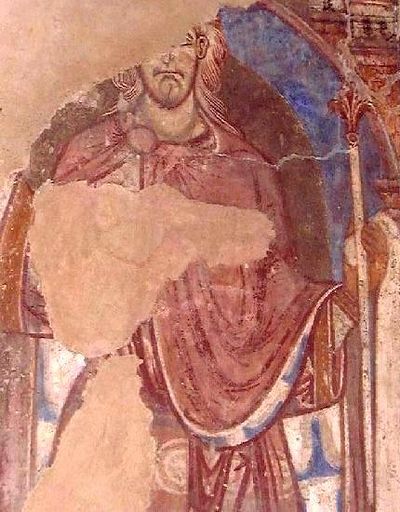 A 12th-century painting of St Oswald in Durham Cathedral

The saint’s successor, King Oswiu, translated his incorrupt relics to Lindisfarne, and later the saint’s right arm was translated to Bamburgh. Late in the seventh century St. Oswald’s niece, the holy Queen Ostrith, had his relics translated to the monastery of Bardney in Lincolnshire. St. Oswald’s veneration as a holy and right-believing King and Martyr began immediately after his death. St. Bede reports many cases of miracles from the relics, from the cross (near which he was martyred) of St. Oswald and even from the earth on which he was slain. Thus, once a sick horse was healed on the spot where the king fell in battle, and on the same day a paralysed girl was fully restored there. An Irishman, who before had led unholy life, fell seriously ill. He then sincerely repented and was healed by water in which a tiny piece of the wooden pole, on which the head of Oswald had been hung, was placed. Pilgrims from far and wide flocked to St. Oswald’s relics, asked for his intercession for them and their relatives, and all received aid from him. Everybody admired and loved St. Oswald, who took special care of the poor and needy, was famous for his compassion, and everywhere sought the Lord’s glory.

In 909, when Viking raids on Mercia began, most of St. Oswald’s relics were translated from Bardney to Gloucester in Gloucestershire by Ethelflaed, daughter of Alfred the Great. The Priory of St. Oswald was founded in Gloucester and it existed till the Reformation. Surprisingly, a part of this tenth century priory has survived to this day (along with several other former monasteries in this city as well as its magnificent eleventh century Cathedral), and a Saxon cross was discovered there not long ago. St. Oswald’s head was later translated to Durham Cathedral and laid in the same tomb where St. Cuthbert’s relics rested. His head is believed to be there to this day. In late medieval times an arm of the saint was translated to Peterborough Monastery (now Peterborough Cathedral in Cambridgeshire) where the chapel in which the relic was held has survived, and there is a Roman Catholic church of St. Oswald in this city. Some minor relics were also kept in Ely (Cambridgeshire) and even abroad—in Ireland and many European monasteries and cathedrals, especially in Germany. 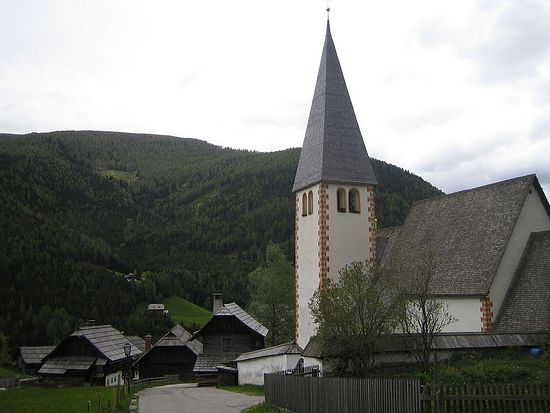 Saint Oswald's church, Bad Kleinkirchheim, Carinthia, one of many churches and place names which commemorate Oswald

St. Oswald was considered to be not only one of universally venerated saints in England, but also one of the universal and most famous saints of all Europe. The baptismal name “Oswald” is still very popular in many countries of Europe. Seventy ancient churches were dedicated to St. Oswald in England, and taking into account modern Anglican and new Roman Catholic churches in England, the total number is now even more. There are important churches of St. Oswald in most parts of England, including the churches in both Heavenfield near Hexham and in Oswestry, associated with the Oswald’s victory over pagans and with his martyrdom. Some place-names, like Oswaldtwistle in Lancashire and Kirkoswald in Cumbria, preserve his memory as well. Outside England today St. Oswald is also venerated in Germany (where over twenty churches are dedicated to him), France, northern Italy, Ireland, Scotland, Portugal, the Czech Republic, the Netherlands, Austria, Switzerland, Slovenia and Australia. A portion of St. Oswald’s relics is most likely kept at Hildesheim in Germany, Lower Saxony. 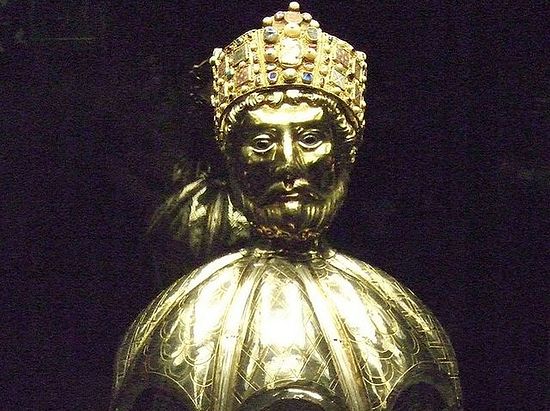 In our view, it is truly deservedly that this remarkable king is still loved and admired for his valour and military skills, for his generosity and piety, and for the fact that he sacrificed his life for the sake of the faith of Christ and for his native kingdom.

Holy King Oswald, pray to God for us! 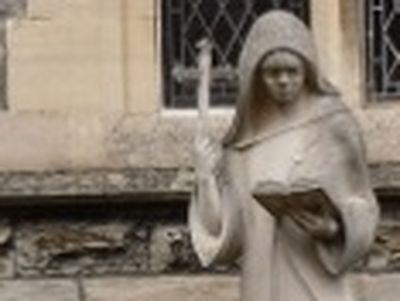 Holy Hierarch Egwin, Bishop of Worcester Commemorated December 30/January 12 (repose) and September 10/23 (translation of relics) Dmitry Lapa Once a certain herdsman named Ioves was searching for a pig that had gone astray. He walked deep into the forest and saw the Mother of God with two angels on the site of present-day Evesham. Amazed by this vision, the herdsman told Bishop Egwin about the miracle. The saint prayed very hard for several days and then decided to go to that place himself. The holy hierarch had exactly the same vision, which had already appeared to Ioves. The Mother of God ordered Bishop Egwin to found a monastery on the site and blessed him with a cross. This event is considered to be the first recorded miraculous appearance of the Mother of God in England.
Комментарии
Катя Тодорова19 августа 2014, 15:00
Очень интересно и спасительно! Да благословить Вас Господ, Дмитриий, за Ваш труд и молитви святаго Освальда да будут всегда с Вами.