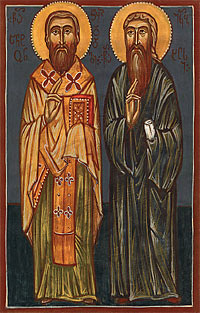 Saint Anton of Chqondidi was born to the family of Otia Dadiani, the prince of Egrisi (now Samegrelo). Anton’s mother, Gulkan, was the daughter of the prince Shoshita III of Racha. There were six children in the family: five boys and one girl. Anton’s sister, Mariam, later married King Solomon the Great of Imereti.

The children received their primary education from their mother, who was raised in the Christian Faith and transmitted the Faith to her children. Her vibrant faith and valorous labors were an example for all who surrounded her. After his father’s death, young Anton was raised by his older brother Katsia. His family was preparing Anton for a diplomatic career, and therefore they devoted special attention to his study of philosophy, literature, the fundamentals of poetry and art, and foreign languages (particularly Turkish and Persian).

From the beginning of the 17th century, the rulers of Egrisi appointed only their own relatives to the Chqondidi diocese. Nikoloz, one of Anton’s older brothers, was prepared for the bishopric, but he was too attached to the world to commit to the heavy yoke of asceticism. The young Anton, however, was zealous for the monastic life, and soon he was tonsured.

The new monk Anton sensed the imperfection of his spiritual education and asked the monks of Martvili Monastery in Egrisi to help him make up for his insufficient knowledge. A group of French missionaries arrived to instruct him in the foundations of Scholastic philosophy, which was very fashionable in Europe at that time. Anton, however, recognized that his foreign tutors had tainted Orthodox doctrine with the poison of heresy. Once, during a meal, Anton turned to a certain Frenchman and asked, “Can you pour wine into this water- filled cup and keep it from mixing with the water?”

The Catholic priest answered that it was impossible, and Anton replied, “As it is impossible to pour water and wine into a single vessel and keep them from mixing, so it is impossible to accommodate both Orthodox doctrine and heresy!” From that day Anton parted with the French missionaries.

The thirst for learning would not give the young monk any rest.

To deepen his knowledge, St. Anton traveled to Tbilisi, to the court of King Erekle II. The king’s wife, Queen Darejan, was Anton’s cousin—a child of his uncle, Katsia Dadiani.

In 1761 St. Anton was consecrated bishop of Tsageri (in lower Svaneti). He soon became famous for his eloquent sermons, which inspired even the Catholicos of Georgia himself.

Grown weary from fasting, St. Anton’s face began to resemble that of an angel. In accordance with his orders, a daily meal was prepared for the poor at the Chqondidi residence. Every subsequent bishop of Chqondidi has continued this practice.

In the 18th century many feudal lords in western Georgia (in Egrisi especially) began to trade slaves for profit. Bishop Anton boldly opposed this immoral activity, and in the years 1792 to 1794 he convened a series of Church councils to publicly condemn the slave traders.

In 1788 Anton approved vast land grants to the monasteries of Martvili, Nakharebou, and Sairme. He persuaded the Dadianis to exempt these lands from taxation.

In 1789 Anton, now a metropolitan, left Chqondidi for Nakharebou Monastery, which he had built. He enriched the monastery with sacred objects, ancient icons and lands. There he spent the remainder of his days.

St. Anton of Chqondidi reposed in 1815 at a very old age and was buried at Nakharebou Monastery.

St. Anton’s spiritual son, devoted friend, and helper, Hieromonk Iakob, also dwelt as a saint in this world and was received into the Heavenly Kingdom.

Shining like the sun in your holiness, O Holy Hierarch Anton and Iakob the Elder, pray to the Sun of Righteousness to enlighten our souls! 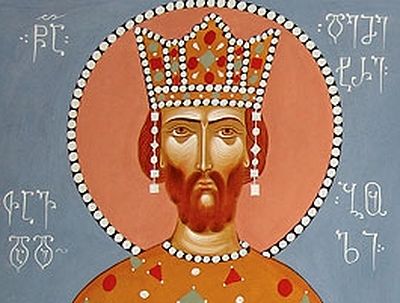 Holy King Demetre the Devoted (†1289) Archpriest Zakaria Machitadze The khan ordered his execution. Fully prepared to meet death, King Demetre prayed fervently, received the Holy Gifts, and gave up his soul to the Lord. Those present witnessed a divine miracle: the sun grew dark and an ominous gloom enshrouded the whole city. 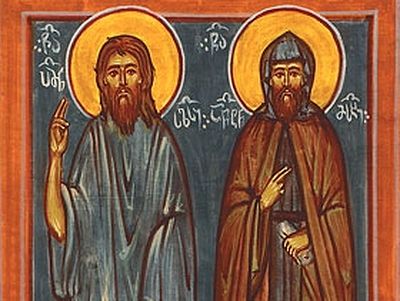 Venerable Father Pimen, Fool-for-Christ and Enlightener of Dagestan, and His Companion Anton Meskhi, the Censurer of Kings (13th century) Commemorated March 16/29 Archpriest Zakaria Machitadze Saint Pimen the Fool-for-Christ and Anton Meskhi (of Meskheti, in southern Georgia) lived in the 13th century, when the Mongols were regularly invading Georgia. The entire country, and the Church in particular, languished under the yoke of Mongol oppression. The Georgian people were once again faced with a terrible choice: to preserve their temporal flesh or attain spiritual salvation. Most would not yield to the temptation of the enemy and chose instead to die as martyrs for Christ. 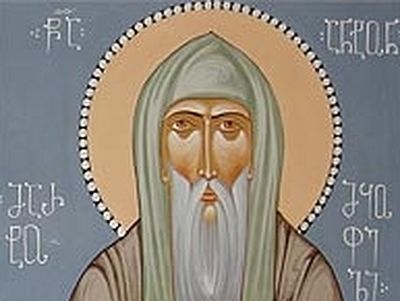 Venerable Anton of Martqopi, the Stylite (6th century) Archpriest Zakaria Machitadze Our holy father Anton of Martqopi arrived in Georgia in the 6th century with the rest of the Thirteen Syrian Fathers and settled in Kakheti to preach the Gospel of Christ. He always carried with him an icon of the Savior “Not-Made- By-Hands.” Anton made his home in the wilderness, and deer visited him every evening to nourish him with their milk.
Комментарии
Войдите через FaceBook ВКонтакте Яндекс Mail.Ru Google или введите свои данные: