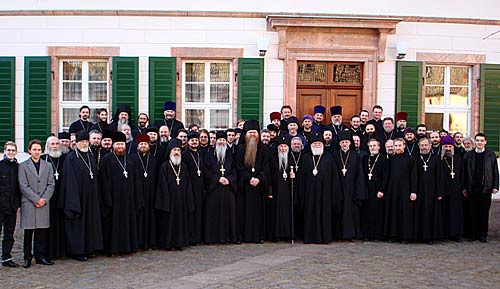 On December 23-25, 2007, a joint pastoral conference of the Berlin Diocese of the Moscow Patriarchate and the German Diocese of the Russian Orthodox Church Outside of Russia was held. This was the first such conference of the Russian Orthodox Church since the reestablishment of the unity within the Local Church. The conference participants, headed by His Eminence Archbishop Mark of Berlin and Germany (ROCOR), His Eminence Archbishop Feofan (ROC MP) and His Grace Bishop Agapit of Stuttgart (ROCOR), gathered at a school center in Kohren-Salis, outside of Leipzig. More than seventy priests and deacons of the two dioceses were in attendance.

The goal of the meeting was to acquaint the clergymen of the two dioceses with each other, to establish warm brotherly relations, and to discuss matters of daily pastoral practice in Germany. The meeting began on Sunday with a ceremonial dinner, and the following morning with a midnight office and moleben. The conference opened with lectures by Archbishop Mark and Archbishop Feofan, who gave historical overviews of the relations between the two dioceses before and after the reestablishment of canonical unity. In fact, the first joint meetings in Germany took place from 1993-1997. Nine gatherings were organized between representatives of the clergymen, headed by the same two archpastors. The two, who had met in the 1970’s, summed up the path they had taken.

The conference took the form of a round table, where each clergyman could ask questions of the bishops on matters of concern to them and to their flock. The main directions of the discussions were matters of catechizing, baptism, leading people to the life of the Church, and spiritual and moral education. Four working sessions were held with brief reports and general discussions. The plenary sessions included speeches by clergymen of both dioceses, which enabled everyone to share their practical pastoral experiences. In summing up this first meeting, it was noted that the service of the members of the two dioceses on common territory benefited the unified flock. A common view was perceived of the challenges facing the clergy of both groups and ways to overcome them through joint effort. The expected spiritual result is maturation in unity through common effort and pastoral ministry.

On December 25, the conferees celebrated Divine Liturgy in the Memorial Church of St Alexy, Metropolitan of Moscow, in Leipzig; this church was celebrating the 95 th anniversary of the laying of its foundation. After Liturgy, Their Eminences performed a funerary litiya in the crypt of the church, where the heroes of the renowned “Battle of Nations” of 1813 are buried. The Parish Rector, Protopriest Alexij Tomjuk, spoke of the battle and the history of the construction of the church. Afterwards, the Oberburgermeister of Leipzig, Burkhardt Jung, hosted a reception at the Old City Hall of Leipzig in honor of the clergymen of the Russian Orthodox Church. Martin Henker, Superintendant of the Evangelical Church of Leipzig, and GP Golub, Consul General of the Russian Federation in Leipzig, also attended.

The decision was made to continue work in other practical areas of church ministry. A general list of parishes will be drawn up, and seminars and joint youth conferences will be held, as will children’s summer camps. This pastoral conference also addressed the problem of prison ministry in Germany.

It was also decided to hold another joint pastoral conference from October 1-4, 2008. The main theme of that meeting will be “The Mystery of Confession and Spiritual Guidance.”

Just as the halved Kursk-Root Icon of the Mother of God miraculously healed itself, leaving no trace of its division, likewise was there no sense of the former division at this conference. Both during the divine services and common singing of prayer by the clergymen and during the working sessions, the atmosphere was identical to that of the usual diocesan meetings, and larger meetings such as the December 2003 meeting in Nyack, NY. There was no doubt: the unity of mind achieved will naturally lead to common work.