That is what Suvorov taught!

A soldier must be healthy, brave,

Imitation is pitiful, emulation is praiseworthy…

Emulation is the impulse of a noble soul

who wants to prove his challenged advantage.

“…Twenty-five, twenty-six, twenty-seven…” Ten chipper young voices in chorus count the times chin touches bar. “Twenty-eight!!!” Dimitry Yakushin barely touches the cold metal for the last time, and breathing heavily, jumps down from the bars. Steam is rising from his heated, steely torso. No small frost today—minus 23 C! The boys of the military-patriotic club named after Prince Dimitry Pozharsky embrace their friend and shake his hand. It looks like they’ll be the winners today… 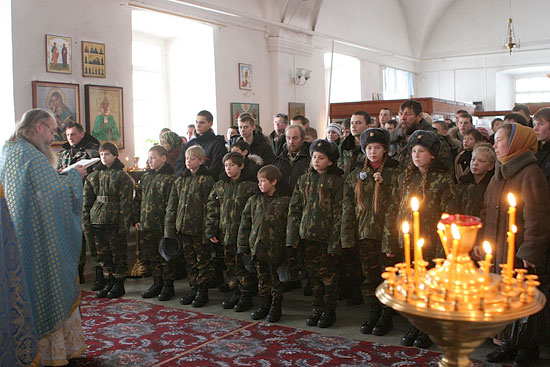 On February 16–17, in the Vladimir region of Russia, ran the fifth Interregional Suvorov Military-Patriotic Club competition, with other children and teen military-patriotic groups. The choice of venue was not accidental. Here, on the outskirts of the ancient Russian town of Lakinsk—once the location of the village of Undol—was one of Alexander Vasilievich Suvorov’s estates. The mansion itself was destroyed during the revolution. Now there is a birch grove here. The Kazan Church, where the great army commander often prayed and sang in the choir, was preserved and is now functioning. Nearby is the village of Fetinino, where the estate of “Suvorochka,” Alexander Vasielivich’s beloved daughter, Natalia Suvorova-Zubova. Its buildings were also destroyed, but the church and bell tower which she sponsored still stands.

Over 250 boys participated in twenty-two teams from the central regions of Russia, the Central Transvolga, and Siberia. The youngest participant was eight, the oldest, seventeen. The event was organized by the Center for the National Glory of Russia; the Apostle Andrei the First-Called Foundation; the Ushakov Group; “Orthodox Russia” social benefit organization; the military department of the Moscow Patriarchate and Vladimir Diocese; and representatives of local government. 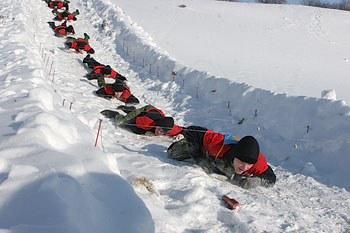 The competition progressed quickly, precisely, and tightly, in true Suvorov style. As the Generalissimo taught, “Instruction is needed; only sensibly and briefly.” The spirit of the great commander seemed to hover invisibly over all stages of the competition, including the morning moleben and Divine Liturgy—a service the Generalissimo himself always deeply revered.

Of course, the most spectacular point in the competition was the “Suvorov obstacle course,” set up by real “green berets”—Afganistan and Chechnya veterans, officers and adjutants. It was a one-and-a-half kilometer long course, filled with slopes and rises, paths barely covered with snow, and surprises for the novices hidden all along the way …

Just beyond the shroud of smoke from the wheels of a “stricken APC,”[1] the participants fall into a “mouse trap”—a cord stretched just over the ground, with little bells attached. They have to crawl very carefully underneath—one ring and “You’re discovered!”—they lose a point. The enemy is near, behind the blown-out shell of a soviet auto base. A play grenade flies in that direction. If they hit it, they get one point.

“Forward, wonder-bogatyrs! The enemy trembles!” (A. Suvorov). They run deftly through the tire course. On the horizon is the “passage.” Two ropes are tied between two spruce trees, the upper rope for the hands, the lower rope for the feet. “One foot fortifies the other, one hand strengthens the other” (A. Suvorov). It is not very high, but falling into the pit means you’ve “perished.” There’s no helping one another—the ropes will hold only one at a time. It’s just as it was in the Swiss Alps, when Suvorov’s men tied the officers’ mufflers together under enemy fire and passed over this “Devil’s Bridge”!

“Be quick; but haste makes waste!” (A. Suvorov). The “passage” is behind them, and forward they go! Not a sound from the enemy, but on the hill behind it, tough, demanding judges watch through field binoculars. The “survivors” climb onto the hill, only to fall under “enemy” fire, and the wounded must be dragged to safety through knee-deep snow. There is the forest—safety! But snowdrifts piled by saboteurs are blocking the way. Finally they see the meadow where a campfire is burning, but there’s no time to rest. They just barely have time to warm themselves with a cup of “Suvorov tea”—hot water with a little sugar—when it’s time to run on.

“Time is more valuable than anything” (A. Suvorov). There is another passage ahead, where they have to put on a safety belt. Below is “the pounding surge of icy water, an alpine mountain stream.”“We are Russians, we’ll overcome!” (A. Suvorov). Fastening their safety belts to the line, the “Suvorovtsi” pass over to the other bank. Next is the ladder made of birch branches and rope, swinging treacherously. Below is that same “icy stream.” At least the enemy is not shooting! No time to rest—an instructor is standing there with a stop-watch, and the team must not be let down. We need a victory! Suddenly, a frozen pond. The two fastest team members go before on skates to cover the rear flank, while the rest must make their final dash for the hill over open space. They haven’t the strength to run, but “victory depends on the legs, while the hands are only weapons of victory” (A. Suvorov). The victors who take the hill are met with a Suvorov “Hurrah!” brotherly hugs, and hot tea.

Besides the “Suvorov obstacle course,” there is the ski race, the pneumatic rifle competition, rope-tying, taking apart and putting together of the Kalashnikov machine-gun, chin-ups, push-ups, weight-lifting, the old Russian game of “rolling logs,” and the military history quiz, dedicated to the great commander. 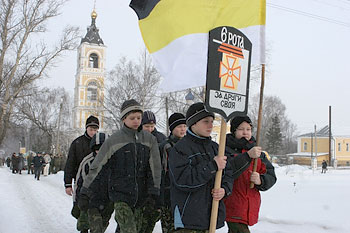 Of course, the goal of the gathering is not only to test the competitors’ mettle and knowledge of history. It is much broader than that—to raise a citizen and patriot of his Fatherland. Meanwhile, the strategic task which the organizers set before themselves is to attract the government’s and society’s attention to the challenge of raising the young generation on the foundation of traditional Russian values, first of which are Faith, family, and readiness to serve their country.

The great commander was well-known for his deep religious faith. However, not everyone knows that he took great care not only for the piety of his people, but also of their families’ well-being. “The peasant’s wealth is not money, but children. Children also bring him money,” he would say. When his peasants got married and had children, Suvorov commanded that they be given financial aide from his own funds. “The aide from my estate is known—ten rubles to each … for it is not pleasing to God when people do not multiply,” wrote Alexander Vasilievich in his writ to the village of Undol in 1785. Once again, in true Suvorov fashion, he helped to solve the demographic and social problems of Russia.

For a long time, we have not been living as we should, and the result is not only the Orthodox commander’s torn-down estate, but a demographic problem which is one of the country’s most serious issues. Today we are seeing some moves in the right direction, to the return of Suvorov’s commandments. Not only do these gatherings serve as a confirmation of this, but there are signs that the government is turning its attention towards the problems of family and demographics. Birth certificates and maternity grants are examples of these signs. In Russia, year 2008 has been named the “Year of the Family.” Therefore, it is particularly encouraging to see the participation of family teams in the competition. For example, there is Yuri Sazhnev, a Moscow businessman and the leader of military-patriotic club “Sixth Battalion.” He has six children, four of whom participated in the competitions. Valentina Sidorova from Suzdal brought her daughter, goddaughter, and niece in the “Tsetsarevich” team. Ekaterina Klopova brought her three children with the team, “Suvorovtsi.” They all received support from the organizers.

In fulfillment of Dimitry Yakunin fans’ expectations, the winners of the competition were from the town of Raduzhny, Vladimir Province. Second place went to “Consolation Command” from the village of nearby Stavrovo. Third place went to a team from Siberia, the railroad cadets of the town of Taiga.

“This year, like last year, there were no prize winners for ‘sacrificial service amongst us,’” Yuri Sazhnev of “Orthodox Russia” commented at the awards. “But that is not really how it is. In our team, just as in the army, a new generation has arrived. The ‘youth,’ kids aged ten to twelve, have come to take the place of the ‘old men.’ Boys from last year’s ‘Sixth Battalion’ have finished high school and begun adult life. Two of them entered military academy, two are honorably serving in the army. Two others are students in prestigious institutions of higher education in our capital. So, we have not ‘lost;’ we have achieved the most important goal—to help these youngsters become real men, patriots, and citizens of their country. They have rightly learned the Suvorov science of victory. That is what Suvorov taught! 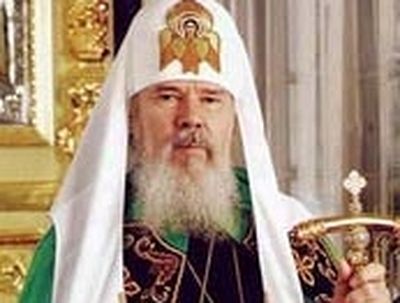 Message of His Holiness Patriarch Alexy of Moscow and all Russia on the occasion of the 60-th anniversary of the victory in the Great Patriotic War His Holiness Patriarch Alexey II of Moscow and All Russia One past unites us, and we must be worthy of the selfless exploits of our fathers and grandfathers in the years of the war. We must not forget what the cost of our Great Victory was, and that we won it fighting shoulder to shoulder, so that our children and grandchildren lived in peace and friendship.

Ordinary Patriotism Lado Gegechkori "Orthodoxy in the Ukraine" published this interview with the monks from Desyatina Monastery in Kiev, who stood between the police and the protesters in late January, stopping the violence for at least a few days through their prayer and example. 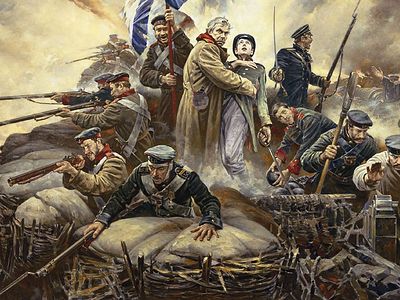 On Military Service and the Defense of the Fatherland Olga Rozhneva

On Military Service and the Defense of the Fatherland Olga Rozhneva “Many who have laid down their lives on the field of battle, will doubtless receive remission of sins, and many will be crowned with imperishable crowns of heavenly glory, while their close ones who are left behind — and all in general who are suffering over this inside and enduring a lack of many things — involuntarily will leave luxury and will be strengthened in the faith.”
Комментарии
Войдите через FaceBook ВКонтакте Яндекс Mail.Ru Google или введите свои данные: