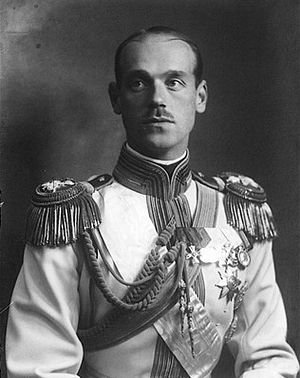 Grand Duke Michael Romanov who was killed alongside his faithful British servant Nicholas Johnson
He had devoted his life to serving his master - and, even in the face of certain death, that loyalty never wavered.

Yet for 90 years, Briton Nicholas Johnson - murdered by Bolshevik revolutionaries in Russia - was officially branded an 'enemy of the people'.

As valet to Michael Romanov, younger brother of Tsar Nicholas II, Johnson had known he faced execution as the 300-year-old dynasty was swept aside in 1917.

Michael pleaded with his faithful servant to flee to the safety of Britain - but Johnson bravely refused to leave his side.

As Johnson lay dying, the wounded Michael went to his aid, begging the execution squad: 'Let me say goodbye to my friend.' Moments later, he too was dead.

Now, however, the Kremlin has officially rehabilitated Johnson - meaning he no longer carries any stain of guilt on official records.

The Russian government declared Johnson, Michael and other members of the Imperial Family had been unlawfully persecuted and killed by the feared Cheka, the forerunner to the KGB.

'The analysis of old archive materials leads to the conclusion that these persons were subject to persecution in the form of arrest, exile and surveillance by the Cheka without being charged with any specific crime, on account of their class and social status,' said officials.

Johnson's remains have never been found. Nor have those of Michael, whose brother Nicholas and his family were infamously murdered a month later.

It is not known if Johnson has any relatives in Britain to celebrate the official clearing of his name. 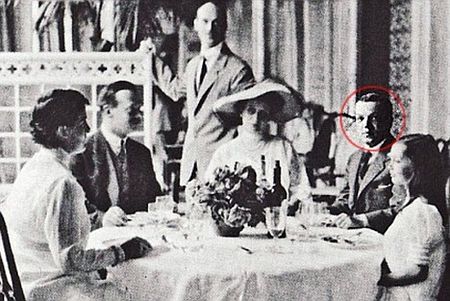 Michael Romanov stands behind his wife Natalya (centre) during a family dinner in Cannes. Nicholas Johnson, circled, sits between her and her daughter Natalya. The child's governess Miss Rata and Andrei Vladimirovich are also at the table

Johnson had been Grand Duke Michael's private secretary since 1912 and was described as being 'round faced, not very tall, and speaking three languages'.

His father, Nicholas, was a Briton, although it is not known exactly where he was from.

Nor is it known how he came to meet and marry Nicholas's mother, a Russian woman who was a music teacher at the Russian Imperial Court.

Nicholas Johnson was an accomplished pianist, and a shared love of music led to his friendship and then employment with the lanky Michael.

The pair became known as 'Little and Large' around the court. Michael represented his brother, the Tsar, at the funerals of both Queen Victoria in 1901 and Edward VII of England in 1909.

As a result of his travels, he became something of an Anglophile.

Many of his tastes and preferences shaped during those years reflect those of the English aristocracy. He was an accomplished equestrian, an avid automobile driver, and loved animals and country living. 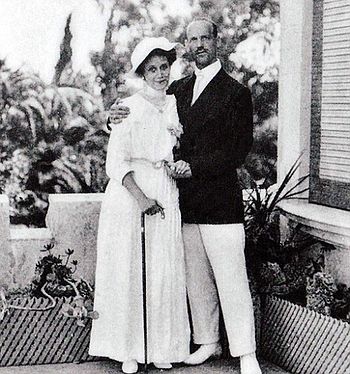 Michael Romanov and wife Natalya pictured in Cannes in 1913

Johnson's moment in Russian history came in 1917 after Tsar Nicholas abdicated on behalf of himself and his sole heir, his haemophiliac son Alexey, 12.

Rather than renounce the throne altogether, Nicholas quit as absolute ruler in favour of his younger brother.

Johnson was involved in drawing up Michael's response a day after Nicholas' abdication on 15 March.

The response did not turn down the throne, but agreed to accept it only if Russia became a constitutional monarchy supported by the 1917.

'will of the people'. Russian historians argue that while never crowned, Michael technically ruled for a matter of hours before Russia was declared a republic by the provisional government. 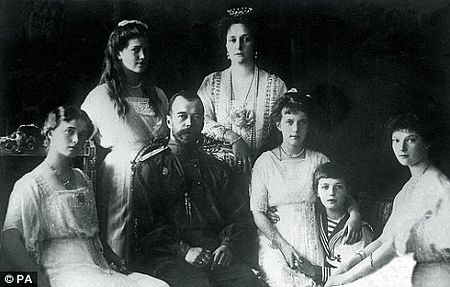 Tsar Nicholas with his family in 1914. The Tsar abdicated his throne to his younger brother Michael. He ruled for a matter of hours before dying alongside his British valet, Nicholas Johnson 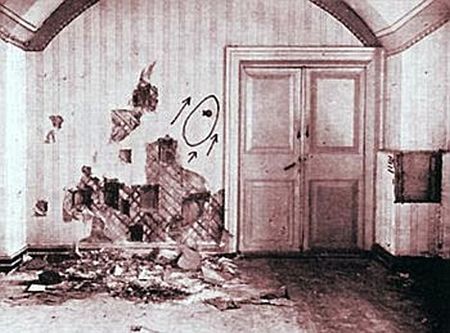 The room where Nicholas Romanov and his family were murdered by Bolshevik revolutionaries. The bullet marks can be seen on the wall

Aware of the dangers ahead, Michael told Johnson he should flee to Britain, but the aide refused to go unless Michael went with him to safety.

But the royal refused to leave Russia, which was then engulfed in the First World War. Both were soon exiled to the city of Perm.

Despite having to report to the guards every day at 11am, they lived in some luxury in a hotel, with a Rolls Royce at their disposal, much to the chagrin of local Bolsheviks.

It was local 'workers' who conducted the execution in a nearby forest - apparently on the orders of Vladimir Lenin, founder of the 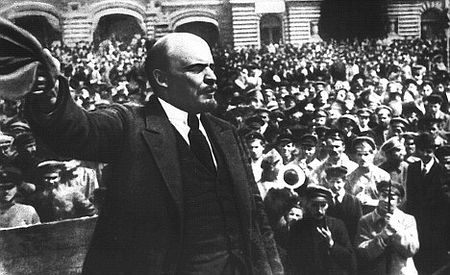 Lenin addressing soldiers in Red Square. It was apparently on his orders that Mikhail Romanov was killed thereby sealing the fate of Brian Johnson

Michael was struck by the first bullet, then Johnson was shot and mortally wounded.

After going to Johnson's aid the wounded Michael was shot at point blank range in the head.

The servant's antique watch was stolen by the man who killed him, Andrei Markov.

He boasted years later: 'I took it as a memory of him after I shot him dead.

'Since that moment, I haven't taken it off. It hasn't required any repair work.' 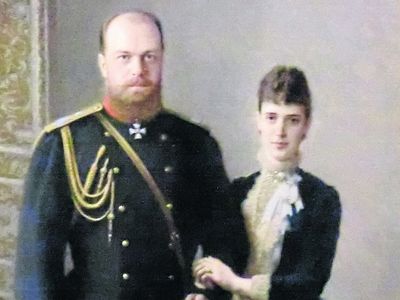 Consorting with the kings and tsars for nearly a millennium

Consorting with the kings and tsars for nearly a millennium Official diplomatic ties have existed between Denmark and Russia for over 520 years, but their shared history goes back much further than that. 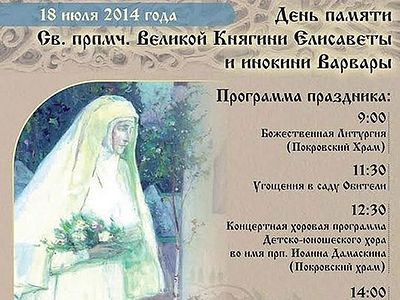 Sts. Martha and Mary Convent in Moscow to Celebrate the Feast-Day of its Foundress

Sts. Martha and Mary Convent in Moscow to Celebrate the Feast-Day of its Foundress July 18 is the feast-day of the Holy New Martyrs Grand Duchess Elizabeth (Romanova) and Nun Barbara (Yakovleva). On this day everybody is welcome to take part in the festive events, dedicated to commemoration of the Holy Grand Duchess, which will take place at the SS. Martha and Mary Convent of Mercy in Moscow. 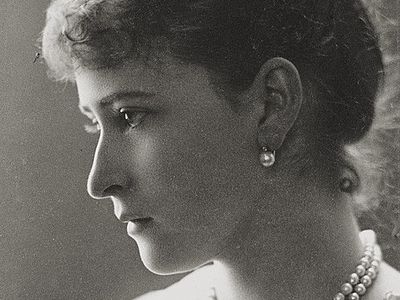 Thirty-three Portraits of Grand Duchess Elizabeth Photogallery November 1, 2014 marks the 150-year anniversary since the birth of Royal Martyr Elizabeth Feodorovna, one of the Russian people’s favorite saints, and honored all over the world.
Комментарии
Robert Michael31 октября 2015, 09:00
Kerensky never declared the interim government a republic although Kamenev and Zinoviev (Bolshevik leaders)were arguing for a republic. Neither was there constitutional monarchy.
John Clare25 августа 2015, 00:00
I thought Russia was declared a republic only in September 1917 by Kerensky. In that case was Michael the legitimate Tsar for 6 months?