Serbian President Tomislav Nikolic met with Serbian Patriarch Irinej on Thursday "to discuss his proposal for a final settlement for Kosovo." 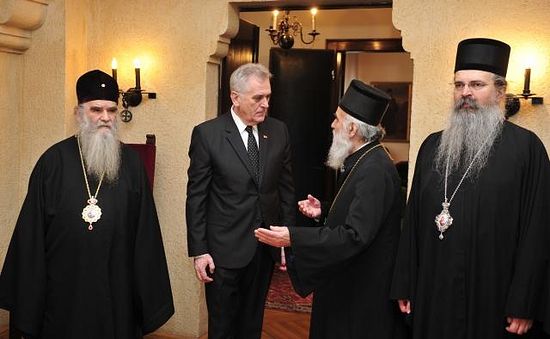 Nikolic, who often meets with the head of the Serbian Orthodox Church (SPC), said that his platform, which was recently announced, "will go in the direction of what Serbia can accept as a final solution, without threatening its sovereignty and territorial integrity."

After the meeting that lasted almost two hours the president told reporters that he and the Holy Synod have "very close thoughts" about the issue.

He noted that these are still "only discussions and consultations" and that there is no "formed document" to present to the prime minister, and then to the public.

"I have presented some of my thoughts and I have not met with the disapproval or disagreement from the Holy Synod. So, we are somewhere very close in our thinking about what it should look like in the end," said the president of Serbia.

Asked when the public will be able to see the document, he said he would be working "closely and intensively" to agree on this with Prime Minister Aleksandar Vucic, "because such a document requires general agreement, or at least the consent of the assembly for what the government will propose on behalf of the president."

"It is not a document to argue about, it is a document in which solutions must be found that the government will stand behind, as the body that needs to implement it and that is negotiating in Brussels," said Nikolic.

He called for patience, saying that first the first meeting between Belgrade and Pristina in Brussels, scheduled for 9 February, should first take place, "in an attempt to continue where (the dialogue) came to a halt a while ago."

"It seems to me that in that time we've all had time to think about what is happening and what awaits us, and according to me, we understand that procrastination and wasting time is not working in favor of Serbia," the president said.

Nikolic said other topics covered today included the problems in the functioning of the Church, its relationship with state authorities, and the issue of restitution.

"The church has concerns about the developments in Kosovo and Metohija, and I think it is proper for his Holiness and the Synod to want to be informed about what is being done, how far we've come," he said.

Nikolic added that, as a member of the SPC, he always wants to know the views of the Synod, while exchanging thoughts with the patriarch "helps make many things clearer."

"I think we the need to meet more often is now very pronounced, at a time or in a year when we may face great temptations and be solving major Serb issues," concluded the president.

Mass procession in support of Serbia takes place in Tbilisi Organized by the Eurasia Institute, in front of numerous representatives of the public at the Tbilisi Cinema House demonstration of the 30-minute documentary film took place, which was timed to coincide with the 15th anniversary of the Serbian tragedy, bombing of Serbian towns and genocide of Serbs in Kosovo.
Комментарии