ISIS Kidnaps Over 100 Christian Families; Human Rights Groups Fear They Will Be Beheaded or Forced Into Sex Slavery 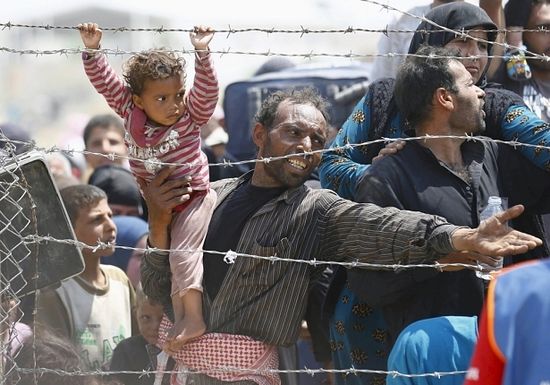 A Syrian refugee holds onto his daughter as he pleads to cross into Turkey at Akcakale border gate in Sanliurfa province, Turkey, June 15, 2015.

The Islamic State terrorist group has abducted scores of Syrian Christian families in what has been deemed the terrorist organization's biggest military advance since it conquered the ancient Syrian city of Palmyra in May.

According to the British-based Syrian Observatory for Human Rights, IS captured the town of al-Qaryatain in the Homs district of western Syria on Thursday and took numerous Christian families hostage. The militants began their attack on the town after jihadi suicide bombers took out checkpoints at the entrance of the city.

After a night of battle with Assad regime fighters, IS took control of the town which was once a destination for many Christians and religious minorities to flee to after the militants took over the city of Aleppo.

SOHR estimates that at least 230 people have been captured by the terror group, including Christians and Muslims. It is believed that of the captured, 45 are women and 19 are children.

The report adds that those kidnapped were on a checklist of Christian families that was prepared by IS. Some of the kidnapped victims were abducted from the Syriac Catholic Mar Elian monastery in the town.

Nuri Kino, founder of the Syrian and Iraqi Christian advocacy group A Demand for Action, told Christian Today that many of the Christians abducted belong to Syriac Orthodox or Syriac Catholic churches, and that the number of known people kidnapped is likely to keep rising.

Kino added that about 1,500 people fled to the headquarters of the Archdiocese of Homs, Hama and Environs.

"IS also took captive all families and began negotiations to free some of them. About 200 Christian families were released and still 100 families are still held captive in the houses of the terrorist group," the statement read. "We received the displaced families in our archdiocese headquarter and gave them the basic and essential needs because they went out of their houses without taking anything with them, neither clothes nor properties. So, we are working on providing them clothing, housing and medication."

In May, Syriac monk Father Yacoub Murad and church member Botros Hanna were kidnapped from the Syriac Catholic Mar Elian Monastery in Qaryatain by masked men while they were preparing aid resources for an increase in refugees from Palmyra.

"[An IS attack] always happens so suddenly and the Church is never prepared. People are running around searching for their loved ones, and children ... These are innocent people, not part of this war," the archdiocese statement added. "[The bishop] is crying — what is he supposed to do? All those clergy to last these three years in Syria and Iraq, my God are they heroes."

IS' capture of the town can be seen as a strategic victory for the militant organization since it links its territory in Palmyra with the Qalamun region of the Syrian capital of Damascus, SOHR director Rami Abdulrahman told AFP. 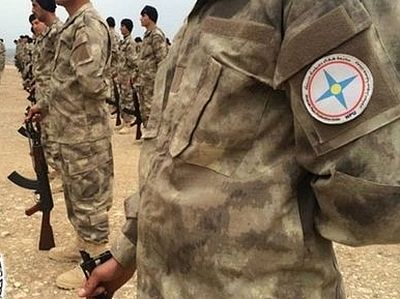 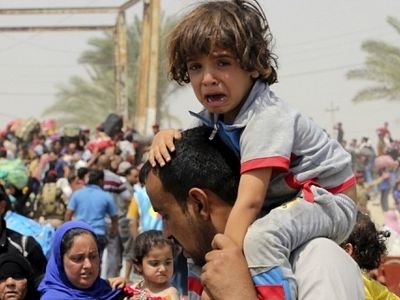 Christian Family Defending 2,700-Year-Old Tomb of Jewish Prophet as ISIS Army Advances on Nineveh A Christian family in the ancient city of Nineveh is reportedly defending the 2,700 year-old tomb of the Jewish prophet Nahum, as the armies of terror group ISIS advance in the region and are now only 10 miles outside.
Комментарии
Connie13 августа 2015, 18:00
All I can say is I cried when I saw the expressions on the faces of this poor man and his children. I wondered what their fate would be and how this is effecting each child and what wounds and scars they may have the rest of their lives as I looked info their faces. I see the little one hiding behind his father, seemingly wanting to disappear altogether. I broke out in sobs anew, feeling so helpless and gut-wrenching pain because of their pain. Where is our empathy for our brothers and sisters? Most of us are so absorbed in our selves, our ridiculously frivolous pursuits! Can we not see that this pain and suffering that we ignore in our comfortable emotional and physical distance, could well be soon our own??I thank you for pursuing the truth and capturing the painful plights of these poor besieged people, these families in the heart-wrenching photos. I pray that these photos could be put out where all the world could see and that people would be so moved by them and their stories that people of good will would gather as a force and put an end to IS now,now, now. Mother Mary help us! Jesus have mercy on us!