Three-day Pilgrimage closes with celebration of the Feast of St. Herman in Kodiak Cathedral

On Sunday, August 9, 2015, the Feast of Saint Herman of Alaska, was celebrated at Holy Resurrection Cathedral, Kodiak, AK. His Beatitude, Metropolitan Tikhon concelebrated the Hierarchical Divine Liturgy with His Grace, Bishop David of Sitka and Alaska and His Grace, Bishop Daniel of Santa Rosa. Clergy and pilgrims from across Alaska and elsewhere gathered for the Liturgy, which marked the 45th Anniversary of Saint Herman’s Canonization. Following the Liturgy, a grand banquet with the introduction of pilgrims was held at the Afognak Native Corporation hall.

Despite three busy days hosting his fellow hierarchs and hundreds of pilgrims from around the world, Bishop David found time to submit the following moving reflection to the OCA web team within hours of the pilgrimage’s closing prayers.

A Peaceful Pilgrimage by Bishop David of Sitka and Alaska 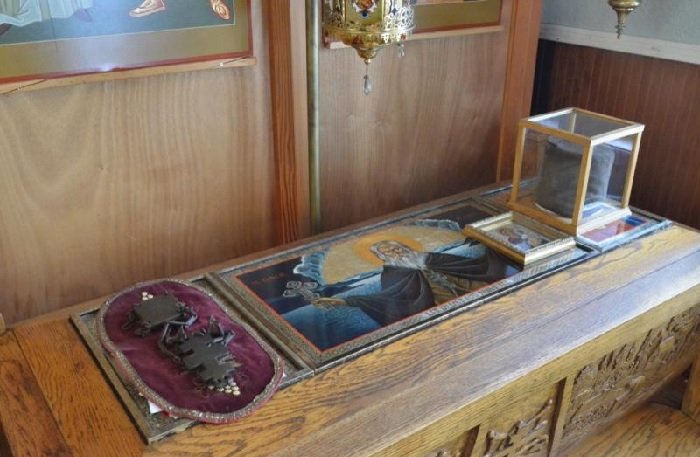 Saint Herman was truly our host this week at the 45th annual Pilgrimage in Kodiak. Sometimes, in the past, the weather has not always cooperated, or there were problems with getting enough boats to ferry pilgrims, or there was some turmoil brewing in Kodiak, or there were issues among the hierarchs, or unexpected guests, but not this year.

Friday opened the Pilgrimage with the Akathist to Saint Herman and veneration of his relics, followed by the Bishop’s Tea, which was held outdoors on the grounds of Holy Resurrection Cathedral thanks to the beautiful warm sunny weather. There the Archives of Saint Herman’s Seminary were opened to tour with our Archivist, Dr. Daria Simeonov.

Saturday morning found calm seas, a little fog (enough to make it interesting), and easy traveling for the pilgrims, thanks to the help of a group of dedicated boat captains in Kodiak, both Orthodox and non-Orthodox, who ferried the people to Spruce Island for the Liturgy at Saints Sergius and Herman of Valaam Chapel built over the grave of Saint Herman. With the help of Archdeacon Kirill and Hierodeacon Herman, who led the singers on the island, the Liturgy was filled with a grace and beauty that transformed every pilgrim in attendance.

Following the Hierarchical Liturgy, His Grace, Bishop David, accompanied by Hierodeacon Herman and Subdeacon Timothy Kreta, went to the graves of Archimandrite Gerasim (Schmaltz) and Archpriest Peter Kreta, who are interred there, and celebrated a Parastas, mentioning also the name of Matushka Karen Mahaffey, the bishop’s late Matushka, who passed away on that date eight years ago.

Everyone then went to the back to Monk’s Lagoon for a dinner prepared by the Ladies of Ouzinkie Village, located on Spruce Island, and then returned to Kodiak for the Vespers and Litiya celebrated by his Beatitude, Metropolitan Tikhon. The newly donated cross and fans, along with the gift brought from Russia by parishioners of His Grace, Bishop Panteleimon, of a new Icon of Saint Panteliemon, whose feast day coincides with that of Saint Herman, who was a visitor to Kodiak last year.

Sunday morning the Hierarchical Divine Liturgy was celebrated in Holy Resurrection Cathedral by His Beatitude, Metropolitan Tikhon; His Grace, Bishop David; and His Grace, Bishop Daniel of Santa Rosa. Celebrating clergy were Archpriest Innocent Dresdow, Cathedral Dean; Archpriest John Dunlop, Seminary Dean; Archpriest Mikhail Kapchits from the Saint Nicholas Russian Patriarchal Parish in Bayonne, NJ; Priest Ishmael Andrew of Napaskiak, who was there with his Matushka and entire family; Archdeacon Kirill Sokolov, who was there with his son, Nicholas; Hierodeacon Herman (Majkrzak); and Deacon Innocent Philo. The choir was under the direction of Matushka Marilyn Kreta. 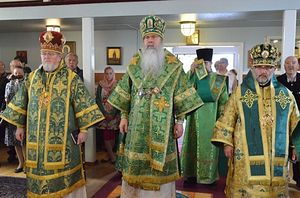 At the beginning of the service, Reader Stephen Wood, a new seminarian at Saint Herman’s, was ordained to the Subdiaconate by His Grace, Bishop David. The newly-blessed cross and fans were used in the processions and added to the beauty of the service. At the conclusion of the Liturgy, there was a mass blessing of various Icons of Saint Herman, brought by the pilgrims, by Archpriest Innocent Dresdow.

Following the Liturgy, a banquet was held at the Afognak Hall. People dined on fresh-caught halibut and salmon. Justin Wood and his capable wife, Joanna, lead the serving team, while Bertha and Susie Malutin organized various parishioners who baked the delicious fish. After the meal videos were shown of the seminary and Matushka Olga Michael.

As was done last year, following the dinner, everyone was asked to introduce themselves and talk about what had touched their heart while at the Pilgrimage. People arose and spoke from their heart about the way Saint Herman and the Island had touched them, some being moved to tears, unable to finish their statements. There were people from nearly every corner of the world—Moscow, the Netherlands, France, Canada, and Japan—as well as people from the “Lower 48.” Some were repeat pilgrims, some of the locals could even say they had been here for all 45 pilgrimages, and for others it was their first experience. There were reporters from Dartmouth College, Public Radio, and even Paris, France. His Beatitude was certainly a hit with everyone, especially the sociologist from France, when they found out he spoke their language.

All three bishop’s emphasized the sense of peace that had descended on the pilgrimage, with His Beatitude, while on Spruce Island in the lush green forest called it a “Green Peace,” and indeed it was. His Grace, Bishop Daniel talked about how well known Saint Herman is now known throughout the world, his Icon being now placed in monasteries in Russia and Serbia. Bishop David listened to the many pilgrims’ comments and their trouble in expressing how they felt and responded that it isn’t always necessary to put our thoughts and feelings into words; in fact the Orthodox Church, herself, does not always use words, referring to the icons, incense, and gestures of worship constantly used where words do not suffice. As the world is bombarded with tragedy after tragedy, the Saint Herman’s Pilgrimage becomes a place of solace and protection from the secular world and our attendance renews our spirit so that we can return to the world refreshed and able to give others what we received here at the Pilgrimage.