Source: The Diocese of the Midwest (OCA) 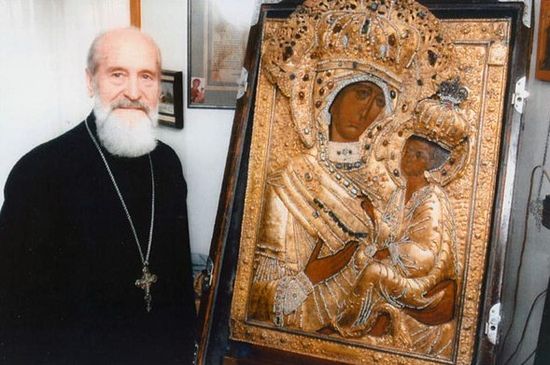 Prior to his assignment to Holy Trinity Cathedral, Father Sergei served Saint Mary [Protection of the Virgin Mary] Church, Gary, IN, and Saint Panteleimon Church, Argo-Summit, IL. Having served for many years as guardian of the Wonderworking Tikhvin Icon of the Mother of God after the repose of His Eminence, Archbishop John of Chicago, he and the members of his family accompanied the icon on its return to Russia in 2004.

Additional biographical details and service times will be posted as they are received.

May Father Sergei’s memory be eternal!

Below is an article available at the site of the Orthodox Church in America chronicling the return of the Tikhvin Icon of the Mother of God to Russia: 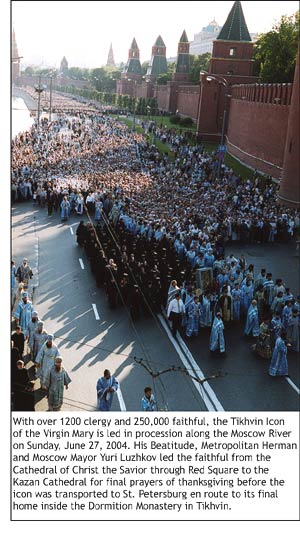 An estimated 250,000 faithful filled streets along the banks of the Moscow River here on Sunday, June 27, 2004 as the wonderworking Tikhvin Icon of the Mother of God was carried in procession from Christ the Savior Cathedral, past Saint Basil Cathedral and the Kremlin, to the Cathedral of the Kazan Icon of the Mother of God in Red Square, marking the icon’s “return home” after a 55-year sojourn in the United States.

Four days earlier, on Wednesday, June 23, His Holiness, Patriarch Aleksy II of Moscow and All Russia and His Beatitude, Metropolitan Herman, Primate of the Orthodox Church in America, received the icon at the entrance to the massive cathedral, after which a Service of Thanksgiving was chanted. For the next four days, thousands of faithful—by some estimates, 50,000 per day—approached the cathedral in an orderly line nearly a mile long, waiting several hours for an opportunity to venerate the icon. Among the other hierarchs present as the icon was brought into the cathedral were His Eminence, Archbishop Job of Chicago and the Midwest; His Grace, Bishop Seraphim of Ottawa and Canada; and His Grace, Bishop Nikolai of Sitka, Anchorage and Alaska.

The icon, which tradition ascribes to the hand of the Evangelist Luke, was brought to the US in 1949 by the late Archbishop John [Garklavs], who saved the icon from Nazis and communists and served as its guardian until his death in 1982. His adopted son, the Very Rev. Sergei Garklavs, guarded the icon after Archbishop John’s repose while awaiting the day when the Church in Russia would be free and the icon could be returned to its original home in Tikhvin, northern Russia.

“The return of the icon reminds us of the close bond between the Churches of Russia and America, of our common ministry in proclaiming the Gospel to all who would receive it and in bringing the fullness of truth to those who, while separated by distance and language and culture, are united in the Holy Orthodox Faith,” Metropolitan Herman said as the icon arrived at the cathedral. “Just as the wonderworking Tikhvin Icon sanctified the Russian lands, so too it sanctified, during its brief sojourn in America, the North American continent, strengthening the faithful and pious Orthodox Christians who have inherited the fullness of truth first proclaimed by the missionaries who planted Orthodoxy in America in 1794.”

While in Moscow, Patriarch Aleksy and Metropolitan Herman signed an official Act acknowleding the icon’s return and highlighting its historical and spiritual significance.

After its departure from Chicago on Sunday, June 20, the Tikhvin Icon was flown to Riga, Latvia. His Eminence, Metropolitan Alexander of Riga and All Latvia, Metropolitan Vladimir, Bishop Seraphim, and members of the Garklavs family accompanied the icon to the city’s Nativity of Christ Cathedral where for the next two days an estimated 300,000 faithful venerated the icon before its transfer to Moscow.

The following day, Metropolitan Herman, Archbishop Job, Bishop Nikolai, and an official OCA delegation arrived in Moscow in anticipation of the icon’s arrival.

From Moscow, the Tikhvin Icon was taken to Saint Petersburg, where some 30,000 faithful per day venerated the icon at Holy Trinity Cathedral in the Saint Alexander Nevsky Lavra. On Sunday, July 4, a massive procession with the icon, led by His Eminence, Metropolitan Vladimir of Saint Petersburg and Ladoga, made its way down the city’s main thoroughfare to the Cathedral of the Kazan Icon of the Mother of God, where endless lines of faithful continued to offer prayers before the icon for three additional days.

On Thursday, July 8, the eve of the icon’s feastday, thousands of faithful anticipated the icon’s arrival at the train station in Tikhvin and joined the two mile procession to the city’s Dormition Monastery. En route, the procession with the icon paused briefly in the city center, where it was welcomed by city and regional officials. Metropolitans Herman and Vladimir, Archbishop Job, and numerous hierarchs and clergy celebrated the Akathist Hymn upon the icon’s arrival at the monastery, after which hundreds of clergy joined Patriarch Aleksy and Metropolitan Herman for the celebration of the outdoor festal Vigil, held in front of the monastery’s cathedral to accommodate the large crowds of faithful. 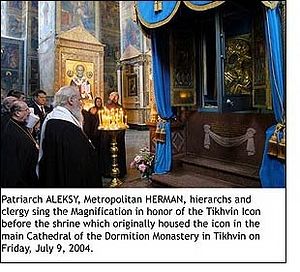 The festal Divine Liturgy was concelebrated by Patriarch Aleksy, Metropolitan Herman, 15 other hierarchs and dozens of clergy at the monastery on Friday, July 9. Tears of joy streamed down the faces of many as the Tikhvin icon was once again enshrined in its original “home.” Speaking on behalf of the faithful of the Russian Orthodox Church, Patriarch Aleksy expressed deep gratitude for the icon’s return, noting that without the concern and efforts of Metropolitan Herman and the Orthodox Church in America, the historic occasion would not have been possible.

“Some sixty-three years have passed since this icon left Tikhvin and began its own pilgrimage—a pilgrimage that took it first to Pskov, then to Riga, on to Liepaja, through Poland, Czechoslovakia, and then to Germany,” Metropolitan Herman told Patriarch Aleksy and the faithful in TIkhvin. “Eventually, guarded and cared for by the ever-memorable Bishop John, the icon made its way to New York City and then to Chicago. During his lifetime, Bishop and then Archbishop John took the icon with him on his archpastoral visits whenever this was possible. Throughout its many years in North America, we were blessed by this icon’s presence among us. However, we know that this icon’s rightful place is here, in Tikhvin, within this monastery church. We know that this icon has now returned home. And we pray that all of us who have been chosen instruments in its return will continue to be blessed with the motherly intercession of the Theotokos and Ever-Virgin Mary.”

While in Tikhvin, Metropolitan Herman, Archbishop Job and members of the OCA delegation were guests at a dinner in their honor hosted by the governor, mayor and other officials. Father Sergei Garklavs was presented with keys to a house in the city of Tikhvin as a sign of gratitude for the years he served as the Tikhvin Icon’s guardian. Patriarch Aleksy also awarded Fathers Sergei and Alexander Garklavs the Order of Saint Sergius for their efforts in returning the icon. In commemoration of the icon’s return, the Garklaves presented an icon of Saints Tikhon and John Kochurov holding a model of Chicago’s Holy Trinity Cathedral to the Dormition Monastery. 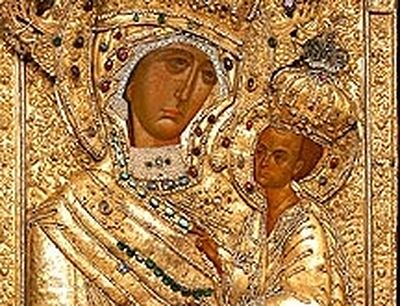 The Tikhvin Icon of the Mother of God Commemorated June 26/July 9 In 2003, over a decade after the fall of communism and the resurrection of the Russian Orthodox Church, the decision was made to return the precious icon to its original home. The icon began its year-long journey to Russia at the 99th annual Pilgrimage to St Tikhon Monastery, South Canaan, Pennsylvania, May 23–26, 2003. 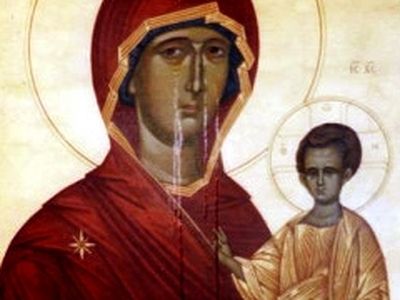 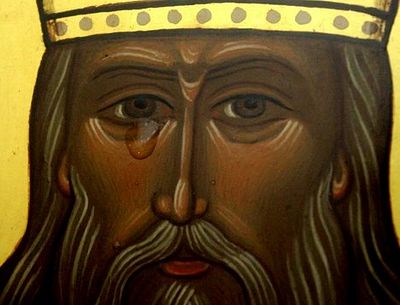 Icon of St. Innocent of Moscow weeping myrrh In Khabarovsk

Icon of St. Innocent of Moscow weeping myrrh In Khabarovsk The unusual phenomenon was noticed by the seminary aspirants who came to take entrance examinations.
Комментарии