Metropolitan Tikhon of All America and Canada

The Holy Synod of Bishops has released the text of a Position Paper delivered in response to the plan presented by the Committee for Canonical Regional Planning during the sixth annual meeting of the Assembly of Canonical Orthodox Bishops in the USA in Chicago on September 15, 2015. The text was reviewed during the Holy Synod’s fall session held in Detroit October 19-23.

The text reads as follows. 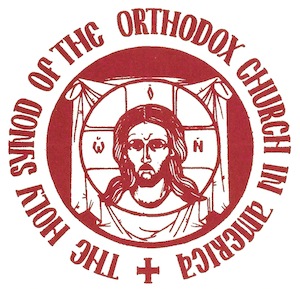 POSITION PAPER OF THE ORTHODOX CHURCH IN AMERICA
IN RESPONSE TO THE PLAN PRESENTED BY THE COMMITTEE FOR CANONICAL REGIONAL PLANNING
Assembly of Canonical Orthodox Bishops in the United States
Chicago, Illinois
September 15, 2015

Your Eminences and your Graces,

The Holy Synod of Bishops of the Orthodox Church in America is grateful for this opportunity to respond to the latest proposal of the Canonical and Regional Planning Committee for steps toward the administrative unity of our churches in the United States, and thus restoring canonical order to our region. We are especially grateful to the Most Holy Patriarchs and Primates for initiating this process in 2009 and we offer our wholehearted support for the goal expressed by the Pre-Conciliar Conference: “that the problem of the Orthodox Diaspora be resolved as quickly as possible, and that it be organized in accordance with Orthodox ecclesiology, and the canonical tradition and practice of the Orthodox Church (Decision, 1.a).”

We have been asked to comment on the latest proposal from the Canonical and Regional Planning Committee (CRPC.) Let me state my conclusion at the start. We believe that the three proposals of the CRPC would be best undertaken in the context of an Assembly of Bishops that is worshipping together at the Eucharist and is working provisionally as a Holy Synod of Bishops. Addressing differences in pastoral practices, considering new models for restructuring our dioceses on a canonical basis and integrating the work of our ministries and departments will take place most effectively and organically when we are a Synod meeting together and praying together on a much more regular basis. This is the way of the Church.

In light of this, we fully support the sentiments expressed by His All-Holiness, Patriarch Bartholomew, in his Greeting to the Officers of the Episcopal Assembly of North and Central America (September 21, 2010): “After all, what is most critical for us as Orthodox leaders is to apply the theology and traditions that we have received from the Church Fathers, ultimately to practice what we preach about the essential unity of the Body of Christ, which is never divided and which comprises many members even while constituting His One Church.”

It is precisely this application of Orthodox theology and tradition that undergirds our position and our general principle of approach to the question of canonical normalization in our region. Thus, the Holy Synod of the Orthodox Church in America remains committed to the vision of a fully functioning and canonical local Church in our region and humbly restates the position we have had from the beginning: the best solution for this region is one that assumes a canonically and administratively united local Church with a properly functioning Holy Synod as a starting point not an ending point.

We ask our brothers of the Assembly to consider a broader question: For what purpose has God, in His infinite Wisdom and Providence, brought us together in this country? Is it not to “preach the Gospel to every creature”? Is it not to “share our spiritual wealth … with others who are deprived of these blessings,” as Saint Tikhon said when he served here? Our Lord Jesus Christ prays to the Father and asks that “they may be one, as we are.” How is this to be realized if we place limits on our responsibility to be the One Holy Catholic and Apostolic Church?

We submit that the most clear and direct path to the goal of canonical unity at this stage is to transform the Assembly into a truly ecclesial body, a Synod of Bishops. We recommend this to the Assembly and to the Patriarchs for their consideration as the most effective way to fulfill the exhortation of His All Holiness in his video address in Dallas: “To move beyond what is mine and yours, to what is ours.” And we hope that in this period of transition—whether three years or ten years—the Patriarchs and Primates will show flexibility in blessing and overseeing the Assembly to form and oversee such a synod in the United States for the building up of the witness and mission of the Orthodox Church in this country.

Is it not time for us, as the Bishops of the Assembly of Canonical Orthodox Bishops in the United States of America to take upon ourselves that heavy burden and wider responsibility by concentrating our efforts, not on a limited exercise in cooperation, but on a more ambitious (and difficult) goal of true unity on an administrative level?

Nevertheless, we are both grateful to His Eminence, Archbishop Nicholae and the members of the CRP Committee for the proposal that we are presently considering. We also recognize the urgency of offering a plan to the upcoming Council as requested by Chambésy and fully endorse this direction. While we agree in principle with the Committee’s proposal, we fear that the strategy of developing a model in a given localized territory within our region is presently too amorphous and needs much more fleshing out, with guidelines, to ensure its viability. It would seem that the most critical need is to work on those differences in pastoral praxis that seem to be paralyzing our progress in formulating a plan. It seems difficult to conceive how the strategy of developing a model in a given area would succeed without first overcoming these obstacles – not because we, as the Holy Synod of the Orthodox Church in America hold this position, but because so many of the other hierarchs do. We believe our meeting this week should concentrate heavily on resolving this aspect of the proposal.

Again, in agreement with the last point on greater cooperation and integration of jurisdictional ministries and departments, we concur with such work in the areas of Christian Education and Youth Ministry. However, with such a priority of focus on recent immigration by some jurisdictions, we cannot see how a common vision of Evangelization and Outreach can practically be achieved.

Finally, as His Eminence, Archbishop Michael said at our 2014 meeting, we believe that for all of our work to be truly blessed and accomplish its purpose, we need now to celebrate together as hierarchs the Holy Liturgy, witnessing among ourselves and to all of America our common Eucharistic unity, and imploring the Holy Spirit to guide us together in achieving the administrative unity that Scripture and canonical Tradition demands, and that our clergy and faithful so fervently desire. Our Lord reminds us clearly, “Without Me, you can do nothing” (John 15:5).

Respectfully submitted,
+ TIKHON
Archbishop of Washington
Metropolitan of All America and Canada
On behalf of the entire Holy Synod of the Orthodox Church in America

Metropolitan Tikhon of All America and Canada 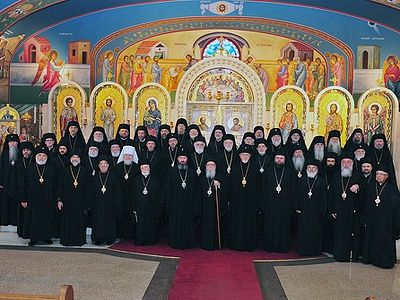 Letter from the Secretary of the Synod of Bishops to the Chairman of the Assembly of Canonical Orthodox Bishops in North and Central America Archbishop Kyrill (Dmitrieff) Our primary concern and consideration, as unworthy inheritors of the Lord’s Apostolic charge, is for the salvation of our flock, considered not in terms of potentiality but actuality. Those whom the Lord in His mercy has delivered unto us are diverse in age, background, race and heritage—and, indeed, ethnicity—and for each soul we rejoice as a shepherd who finds the one sheep that has gone astray (Isaiah 53:6; Matthew 18:12-13). 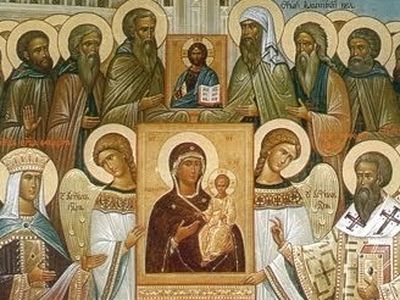 Assembly of Bishops issues message for Orthodoxy Sunday The spiritual theme of the day is first of all the victory of the True Faith.