Iben Thranholm examines political and social events with focus on their religious aspects, significance and moral implications. She is one of Denmark’s most widely read columnists on such matters. Thranholm is a former editor and radio host at the Danish Broadcasting Corporation (DR), at which she created a religious news program that set a new standard for religious analysis in the newsroom. She has traveled extensively in the Middle East, Italy, the United States and Russia to carry out research and interviews. She has been awarded for her investigative research into Danish media coverage of religious issues. 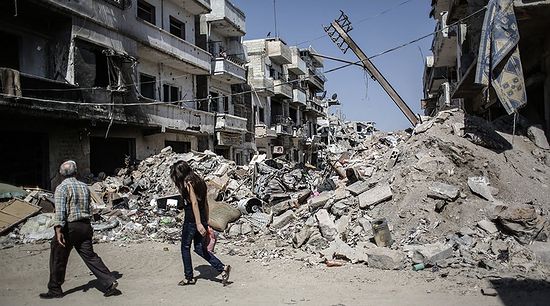 The Syrian Christians, father and daughter, are visiting their house abandoned them during the military action in the center of Homs. Photo: RIA Novosti

At no time in history has the persecution of Christians been as intense and widespread as it is at the moment. There is a global war on Christians, which has escalated in scale and intensity since the US invasion of Iraq.

After the deliberate destruction of nation states and government structures all over the Middle East, Islamist groups have seized the opportunity to wage war on and persecute Christians.

American journalist and poet Eliza Griswold has written extensively in the New York Times about how the US invasion has caused hundreds of thousands to flee in Iraq. “Since 2003, we’ve lost priests, bishops and more than 60 churches were bombed,” Bashar Warda, the Chaldean Catholic Archbishop of Erbil said.

With the fall of Saddam Hussein, Christians began to leave Iraq in large numbers, and the population shrank to less than 500,000 today from as many as 1.5 million in 2003.

With the Arab Spring things only went from bad to worse. ISIS’ success in Iraq has inspired similar groups in other continents, most notably Africa, where the Egyptian Muslim Brotherhood commit numerous atrocities against Christians, as do Boko Haram in Nigeria and Al-Shabaab in Somalia.

Not only has the USA, supposedly ‘God’s Own Country’, created hell on earth for Christians all over the Middle East and then turned a blind eye to beheadings, rape of children and unspeakable atrocities. America appears to be deaf, dumb and blind to the problem, and that is obviously bad enough. But in addition to this, Western foreign policy has failed miserably. It has failed by underestimating the significance of religious faith in the countries subjected to Western intervention. The West’s most egregious foreign policy error is the assumption that the Western secular model, which demands clear separation between organized religion and politics, may be imposed on the rest of the world, irrespective of cultural or religious background.

The unmitigated disaster of Western Middle East policy testifies to the profound error of this presumption. Religious conviction is one of the main reasons for the rejection of Western democracy and the repeated Western foreign and interior policy failures of the past two decades. Western rejection of religion as a valid factor of reality may turn the political agenda upside down, and this offers opportunities and advantages for Russia. 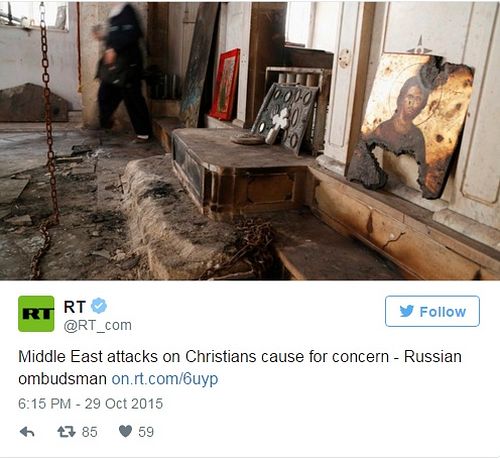 To many nations and peoples outside the West, modernity means a return to their religious roots. The 21st Century therefore does not permit a separation of geopolitics from religion. Vladimir Putin understands this. In February 2012, he made a solemn vow to the Russian Orthodox Church that protection of persecuted Christians all over the world would be a key issue of his foreign policy.

Even though the immediate cause of Russian intervention in Syria is the fight against terrorism, the protection of Christian minorities and the defense of the Christian heritage in Syria play a crucial role. The most revered Christian Orthodox saints were Syrians, including Ephrem the Syriac, Basil the Great and St John Chrysostom.

The head of the Synodal Department for Church and Society Relations, Archbishop Vsevovlod Chaplin, made the following statement in connection with Russia’s decision to accept Syria’s request for military intervention in the form of air strikes against ISIS in Syria:

“Any fight against terrorism is moral; we can even call it a holy fight.” 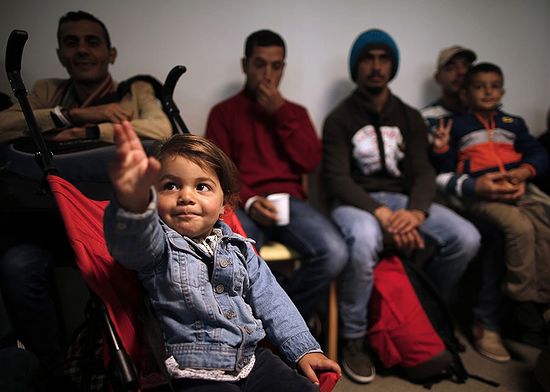 A young girl reacts moments after refugees from Syria and Iraq arrived at a refugee centre in Champagne-sur-Seine, near Paris, France, September 9, 2015. © Christian Hartmann / Reuters

Chaplin does not refer to a new war of religions, but instead - quite the contrary - to the moral obligation to fight evil. However, to do so requires more than military hardware and strategy. It requires spiritual strength. Russia derives its spiritual strength after the Cold War from a mighty revival of the Orthodox Christian faith while the West is abandoning its Christian identity. The East and the West have switched roles as Christian superpower and defender of the Christian faith.

“Christian countries can oppose pseudo-Islamic extremism only by basing themselves on traditional religious values,” Chaplin believes.

"Secularism will never be able to cope with the challenge of religious fanaticism and extremism coming to Europe today. Secularism will always lose to religious or pseudo-religious extremism. Even if secularism successfully beats off religious and public radicalism with the help of power and money for some time, it won't last long, only for 20-30 years," the priest said at the conference Cults, Neo-paganism, Secularism: Danger of Christian Ethos' Decay in Slovenia. In other words: something will win over nothing every time.

Due to its secularist ideology, the West is no longer in any position to protect Christian interests in the world as it did for centuries in the past. It now creates terrorism and religious fanaticism fuelling blood-curdling horrors. Russia is the only major power in the world today that accepts the responsibility of protecting persecuted Christians.

The fact that Putin is now the best friend and the greatest hope of persecuted Christians will have an impact on strategy that reaches far beyond the Middle East. This spiritual dimension of Russian foreign policy has been completely ignored by the Western media.

The world’s Christians number 2,300 million. Two thirds of them live outside the Western world and are exposed to persecution everywhere. According to Open Doors, 322 Christians are murdered for their faith every month, 214 churches and Christian properties are destroyed and 772 incidents involving various forms of violence are committed against Christians.

Also a great number of Christian churches and shrines have been blown up and destroyed by ISIS among these the burial shrine of the Old Testament prophet Jonah in Mosul.

These persecuted Christians are in dire need of a champion, a great power able and willing to defend them. They obviously accept such help as is offered. Syrian Christians have expressed great elation and gratitude that the Russians have taken decisive steps to put an end to the slaughter of Christians that has been going on for more than four years.

To many Christians around the world, Putin may become the 21st Century Constantine, the Roman emperor who helped the Christians of his day by putting an end to the persecutions endured under the Roman Empire. Constantine also conferred privileges on the Christian church that allowed it to become strong enough to have a positive impact on society. Putin may turn out to play the same role in the history of our day and recreate the Christian superpower that used to be the role played by the West, but which the West has abandoned.

When Western media mention Putin’s declaration of protection for persecuted Christians, they consistently analyze it in terms of a mere tool of geopolitical expansion and imply that this is not rooted in genuine Christian faith. Western pundits portray Putin’s faith as a cynical ploy to promote his political interests. However, this puts on display the abysmal Western ignorance of the spiritual development that has taken place in Russia since the demise of Communism and the Cold War.

In his autobiography “First Person”, published in 2000, Putin states that the first line in any Russian law code should be moral values and that Russia must pay complete attention to its spiritual position, in the same way as Russia is concerned with its political and geographical position.

This indicates that President Putin has real understanding of the fact that in this world, the spiritual foundations of political reality have a profound effect on the way a culture develops. A viable culture needs a moral compass that goes deeper than passing political expediency and the secularistic tenet “do what you will”.

The many Christians betrayed by the West now look to Russia for hope and protection, and this can open a new avenue of global influence for Russia.

Russia’s declared determination to protect persecuted Christians has rapidly growing significance for millions of Christians all over the world. Accepting this role is a game changer for Christianity and simultaneously holds the potential for changing Russia’s role in the world. 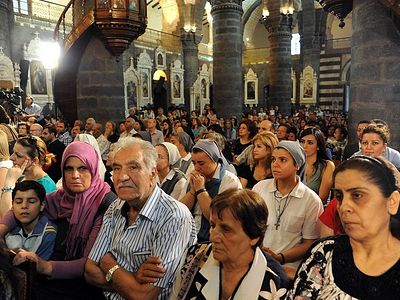 Systematic Christian Silence on the Russian Intervention In Order to Prevent the Repeat of Tragedies and Civil Wars Pierre Atallah "The position of the Russian Deputy Foreign Minister Mikhail Bogdanov during his meeting with Orthodox figures at the Phoenicia Hotel last year is still fresh in people's ears: 'We shall not let the Christians fall and be exterminated in the Middle East.' At the time, many didn't realize that the Russians weren't joking." 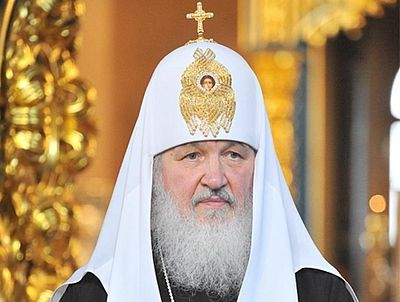 Russian Military Participation in Syria Should Bring Peace to Region - Patriarch Kirill "Wishing peace to the peoples of Syria, Iraq and other countries of the Middle East, we pray for this tough local conflict not to develop into a major war, for the use of force not to lead to the death of civilians, and for all Russian military [personnel] to return home alive," the patriarch said.

Death, violence and displacement: The persecution of Christians Believers: attacked and killed; churches, schools and businesses: looted and torched - Christians are the most persecuted religious group in the world. Can Christians hope for the freedom to practice without fear?
Комментарии