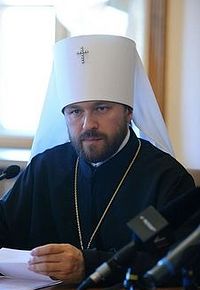 Met. Hilarion of Volokolamsk
World Council of Churches General Secretary Rev. Dr. Olav Fykse Tveit, who is in Moscow on an official visit, and Metropolitan Hilarion of Volokolamsk, head of the Moscow Patriarchate’s department for external church relations, answered questions from the Russian and foreign mass media on June 30, 2010, at the DECR.

Metropolitan Hilarion introduced the Rev. Dr. Olav Fykse Tveit, noting that it was his first visit to the Russian Orthodox Church after his election as WCC general secretary.

"The World Council of Church is the oldest Christian organization. It was founded in the post-war period based upon two inter-Christian movements which had existed before the war. One of them was called ‘Faith and Order’, which focused on theological matters; the other one was ‘Live and Work’, which focused on practical cooperation. When the World Council of Churches was founded on this basis, the Faith and Order movement became one of the commissions of the WCC. The Russian Orthodox Church joined this organization in 1961 and to this day is one of its members—the largest one. Among WCC members are Local Orthodox Churches as well as Protestant, Anglican and Methodist Churches. The Roman Catholic Church is not a member of the WCC, though it participated in the work of its two commissions; namely, Faith and Order and the Working Group for cooperation between the World Council of Churches and the Roman Catholic Church," he said.

His Eminence Hilarion reminded the journalists that during his visit the WCC General Secretary Dr. Tveit met with His Holiness Patriarch Kirill of Moscow and All Russia and several state officials.

Having thanked Metropolitan Hilarion for the introduction, which briefly described the history and structure of the WCC, the Rev. Dr. Tveit said that he accepted with gratitude the invitation to visit the Russian Orthodox Church as the largest member church according to the number of its members. 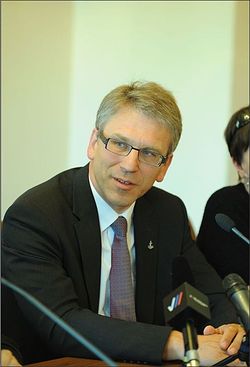 Rev. Dr. Olav Fykse Tveit
The WCC general secretary said, "I was very much impressed by the introduction to life in Russia, especially by my visit to Butovo, where I could see what you have gone through. The martyrs who died for their faith strengthen the faith of those who come to that place today. I also saw today’s life of the Church and heard its plans for the future. I had an opportunity to see your worship life; I could see how the Church is developing, her social service, work with the youth, information work as well as religious education. I could see that the Church defends the eternal values for which we live and die; these are God-given values". He also underscored that the Russian Orthodox Church made a great contribution to the life of society, coming out with numerous initiatives in the area of dialogue with other religions in the country.

The WCC general secretary also mentioned that the Permanent Commission for Consensus and Cooperation between the World Council of Churches and the Russian Orthodox Church was meeting in Moscow during his visit.

Answering a question from journalists about the WCC’s attitude to same-sex unions and women bishops, the WCC general secretary said, "We work according to the principle of consensus. Therefore the WCC has no point of view on matters in which consensus has not been reached among its member churches, which are 350. The WCC has no position of its own on either of the questions you have raised."

He reminded the journalists that the role of the WCC lies precisely in facilitating conversations and providing a space for various Churches to speak out on various issues. "I cannot say that I foresee the time when the WCC will someday have one point of view on any of the problems that have been raised just now".

Metropolitan Hilarion answered a question concerning theological discussions in the WCC. He said that theological dialogue is held in the WCC Faith and Order Commission, adding, "A few years ago this Commission undertook on my initiative a study on the importance of Church Fathers for Christianity today. During that consultation, some Churches, perhaps for the first time in many years, addressed the theme of holy fathers and the significance of their writings for modern man. Moreover, during a plenary meeting of the Faith and Order Commission, all the participants, and there were over 150 of them, were given t-shirts with quotations from such holy fathers of the Church, as Ambrose of Milan, Gregory the Theologian and Isaac the Syrian". The next consultation in this working group will take place next year in Moscow and will be devoted to the significance of church hierarchy for a Christian community". 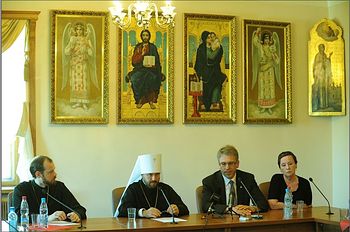 As the DECR chairman underscored, some themes important for the Orthodox but forgotten by some Protestant communities are raised in theological dialogue held precisely in the WCC.

Dr. Tveit on his part added that the theological discussions held at present in the WCC deal with such themes as the mission and nature of the Church, the significance of baptism, Christian ethics and others.

He also mentioned that during his visit he met with Russian Deputy Prime Minister A. Zhukov, First Deputy Foreign Minister A. Denisov, and the Duma Commission for International Affairs Chairman K. Kosachev. 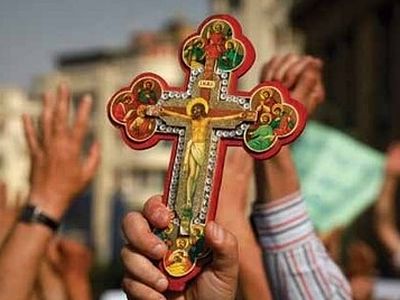 World Council of Churches attacks Israel to no gain 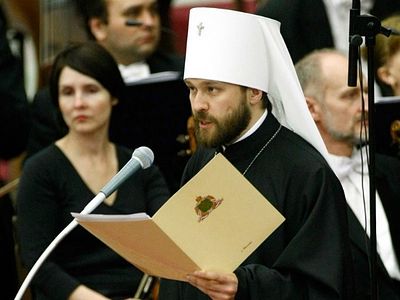 Who Is The Man Who Fears We Could Be On The Eve Of 'WORLD War III'? Hardly any Americans will know of Hilarion Alfeyev, 48, a Russian Orthodox bishop who acts as the "foreign minister" of his Church, but it is important that they do. He is a bridge between not just the Orthodox Church and Catholicism but a bridge between Russia and America. 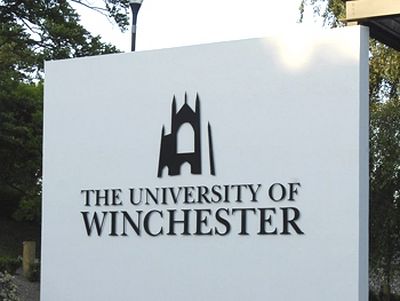 Russian Metropolitan about Orthodox and Protestant Christians According to him, today these contradictions between Christians of different denominations refer not only faith questions, but the morality sphere also - "the sphere, where Christian testimony can be unified, regardless of faith disagreements."
Комментарии
Войдите через FaceBook ВКонтакте Яндекс Mail.Ru Google или введите свои данные: