Hardly any Americans will know of Hilarion Alfeyev, 48, a Russian Orthodox bishop who acts as the "foreign minister" of his Church, but it is important that they do. He is a bridge between not just the Orthodox Church and Catholicism but a bridge between Russia and America. 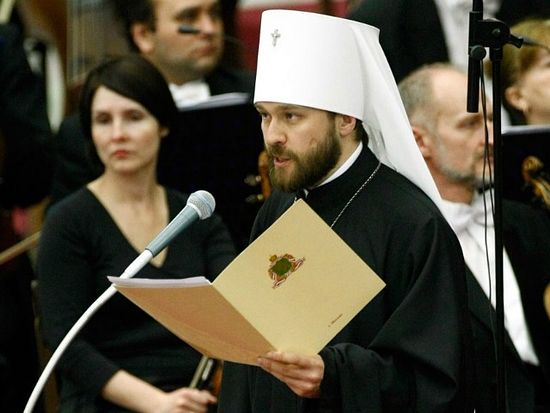 As a Catholic American, I first saw him 15 years ago on a cold December day in Moscow. Hilarion, then 33, was already a rising star in the firmament of the Russian Orthodox Church.

He had done his graduate studies in philosophy at Oxford — rather rare for Russian Orthodox Church leaders.

Back in Moscow, he had been named Secretary for Inter-Christian Affairs in the Department for External Church Relations of the Moscow Patriarchate, meaning his task was to deal with Protestants and Catholics.

Hilarion had been sent to attend a special ceremony in the Catholic Cathedral of the Immaculate Conception in Moscow. It was a small courtesy extended by the Russian Orthodox leadership to the Catholics, who number only a few thousand in that great city of 17 million.

The Catholic cathedral had been closed for 72 years, from 1920 until 1992. The Soviets had taken it over and constructed offices in the main nave, right up to the roof, with several levels of hallways and little cubicles. Grass and small bushes had sprouted from the roof and steeple.

After years of work by the Catholic Archbishop of Moscow, Tadeusz Kondrusiewicz, the cathedral was being re-consecrated and opened again.

On that day, Hilarion was the only Russian Orthodox cleric in a cathedral filled with hundreds of Polish, French, American and Filipino Catholics who tended to regard all Russian Orthodox with a certain diffident suspicion. He might have felt defensive, even intimidated.

Yet Hilarion, dressed in a long black robe, rose from his place in the front row, strode calmly to the lectern, and offered a sincere, warm congratulations to all present for the reopening of the cathedral.

Here was a Russian who seemed very far indeed from the boorish Nikita Khrushchev, with his famous “We will bury you!” while pounding his shoe on the desk at the United Nations. Here was a Christian monk who was also a gentleman.

In fact, Hilarion is a superbly educated Russian of deep sensibility, Oxford-trained, fully in command of the English language, who grew up under the Soviet regime but who, after training in the Moscow conservatory for some years to be a pianist and composer, while making a pilgrimage with his mother to a famous monastery in Georgia, felt the call to religious life and became an Orthodox monk.

American Catholics prayed after every Sunday Mass for much of the 20th Century for the “conversion of Russia.” With the fall of Communism and the rebuilding in Russia of thousands of churches in the past 20 years, are we perhaps seeing the fruit of those hundreds of millions of prayers even now?

In 2004 a vastly important symbol was returned to Russia from the Vatican, an image that had gone missing during the 1917-1918 revolution, the Marian image of “Our Lady of Kazan” which is not only a symbol of Orthodox faith but of Russian patriotism. A copy of this image was ordered by Stalin in 1943 to be paraded around the walls of Leningrad in order to break the German siege, which then broke.

Another supremely important religious artifact was returned to the eastern Churches during the pontificate of John Paul II, the true cross of St. Andrew. This cross, a fragment really after it was largely burned up during the French revolution and the fragments came under the protection of the Catholic Church, went on display for the first time in Moscow last summer. The Orthodox faithful waited for five hours in the rain at Christ Our Savior Cathedral, only a stone’s throw from the Kremlin, to venerate this cross for only a second or two.

When Hilarion went to pay his respects to the new Pope Francis, he brought Francis an icon of Our Lady of Humility, a remarkable message from the Orthodox Church to the Catholic Church. A few days later, Francis “re-gifted” the image, giving it to Pope Emeritus Benedict upon their first meeting. Hilarion said he was “very pleased and touched” at this.

Hilarion, while steeped in the liturgy and tradition of the East, is decidedly western in his outlook and keenly interested in America. His orchestral works have been performed in Rome, New York, Washington DC, Boston and Dallas.

Hilarion’s career has not been without controversy. At a 2010 lecture to Anglican clergy and faithful, he is famous for shocking them with his denunciation of their community’s departure from traditional Christian teachings.

He has been tireless in his defense of traditional Christian values, and in this effort he has shocked some western sensibilities, denouncing in very strong terms the ideology of the LGBT movement.

And this spring in Minsk, Belarus, at an Orthodox-Catholic dialogue, Hilarion denounced to so-called “Uniate Churches” — those with eastern liturgy, like the Orthodox, but western loyalty to the Pope of Rome. One of the Uniate Churches was a key player in the Maidan Square protests that brought down the duly elected if corrupt Ukrainian administration last February. And this is much on his mind.

I last saw Hilarion on July 13 in Moscow, at the end of his regular Sunday liturgy. We spoke briefly about working together on other common projects in defense of Christian values, including the establishment of a Russian Academy in Rome, similar to the American, French and British academies in Rome.

But I sensed that something had changed. Hilarion seemed weighed down with a sense of sorrow and foreboding, this even before the as-yet unexplained shooting down of the Malaysian airliner over Ukraine. He said he feared that the summer of 2014 might, unfortunately, go down in history as similar to the summer of 1914, which produced the First World War.

Hilarion is an important door between the east and the west, between Orthodox and Catholics, and between Russians and Americans. It is very good he is speaking for the first time to the Breitbart audience.

As editor-in-chief of Inside the Vatican Magazine, Robert Moynihan is one of the most respected Vaticanistas in Rome. He has been involved Orthodox-Catholic dialogue for much of the past 15 years. He has worked closely with Metropolitan Hilarion for much of that time. 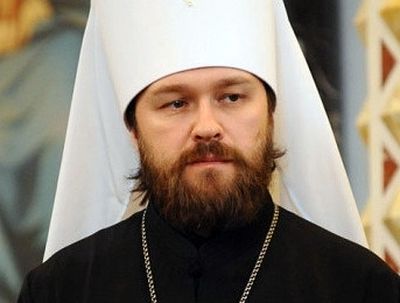 Metropolitan Hilarion: Western liberals make a grave mistake by imposing totalitarian standards on free people Metropolitan Hilarion of Volokolamsk, head of the Department for External Church Relations, speaking during the weekly programme ‘The Church and the World’ on Russia 24 TV channel on March 24, 2012, commented on the British authorities’ decision to defend in the European Court of Human Rights the legitimacy of the corporate policy adopted by some British commercial companies to ban the wearing of baptismal crosses. 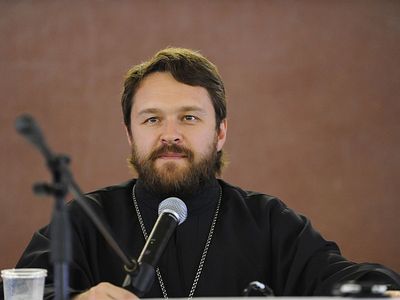 Religious Factor in International Relations. The Metropolitan Hilarion's lecture at the Moscow State Institute of International Relations Metropolitan Hilarion (Alfeyev) In the discussion on the significance of Christianity as an essential factor in the development of European nations, it is necessary to dwell on one of the developments which, having been born in Europe, has come to influence many modern global processes. The consistent secularization of the European civilization going back to the Renaissance has acquired an unprecedented scale in our days.

Three-Fourths of Russian Residents Believe that Russia Needs Orthodoxy The Sreda Sociological Service provides information on the opinion of Russian citizens about the necessity of Orthodoxy for the country:
Комментарии
Angelo Perfili 5 сентября 2014, 00:00
awesome....