On November 25, His Holiness Kirill, Patriarch of Moscow and All Russia received the Turkish Ambassador to Russia, Aydin Sezgin, reports the Patriarchal communications service, Patriarchia.ru. Also participating in the meeting at the Patriarchal residence on Chisty Lane in Moscow were Igumen Phillip (Ryabykh), Vice Chairman of the Moscow Patriarchate External Church Relations department (DECR), Priest Sergei Zvonarev, DECR secretary of for the "far abroad," and Shule Giurel, advisor to the Turkish Embassy.

The Patriarch related his warm impressions of his visits to Turkey, and expressed his gratefulness that so many Orthodox pilgrims are able now to travel without obstruction to the Christian holy places on Turkish territory. "Judging from the impressions that they bring back with them," the Patriarch said, "it is very important for these people to visit those places. I have received many requests from our bishops and pilgrimage groups in their dioceses for blessings to make similar pilgrimages. I am sure that the flow of religious tourism and pilgrimage to your country will grow, and this will undoubtedly help to deepen the relationships between our peoples."

The Patriarch said that it is important that there is now a religious dimension to already existing culture and economic ties between Russia and Turkey, and that he hopes this will continue.

The Turkish Ambassador replied that His Holiness' visit to Turkey is also warmly remembered. "Our doors are always open to all Russians, including those who make trips of a religious nature. Of course, tourism is important to us, but even more important are personal relationships."

The Patriarch noted that many Russians visit Turkey on vacation, and there also exists a Russian-speaking diaspora in that country. He expressed his hope that these people will have the opportunity to receive spiritual care in Turkey. He sees positive trends, such as the spiritual care of Russia-speakers in Antalia by a priest of the Constantinople Patriarchate who received his education in the St. Petersburg Theological Academy. 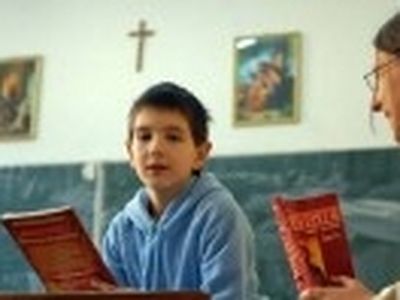 Italy’s ambassador to Moscow thanks Moscow Patriarchate for support in getting the case of Lautsi reviewed On June 22, 2011, a presentation of the Russian version of the book entitled European Religious and Cultural Identity: the Issue of Crucifix took place in the Italian embassy in Moscow. Italy’s ambassador to Moscow Mr. Antonio Zanardi Landi thanked the Moscow Patriarchate for support in defending the right of Italian schools to place crucifixes in classrooms. 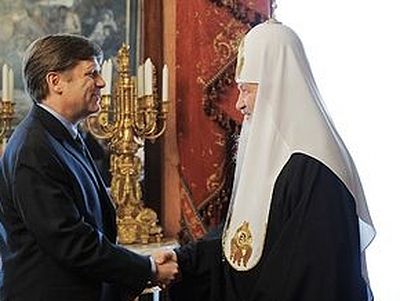 Primate of the Russian Orthodox Church meets with US Ambassador Michael McFaul On 30 March 2012, His Holiness Patriarch Kirill of Moscow and All Russia met with H. E. Michael McFaul, the recently appointed Ambassador Extraordinary and Plenipotentiary of the USA to the Russian Federation. They were joined in the meeting, which took place at the Patriarch’s working residence in Chisty side-street, by Howard Solomon, deputy minister counsellor for political affairs of the US Embassy in Russia, and Jeremy Richart, political officer of the Embassy.