Archbishop Chrysostom: The Turks want to destroy all trace of Christianity from Cyprus 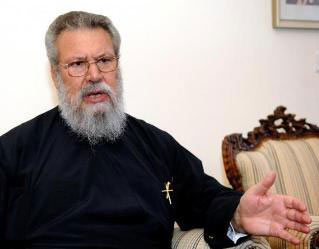 In a recent meeting, Štefan Füle, Enlargement and European Neighborhood Policy, and Archbishop Chrysostom of Nova Justiniana and All Cyprus talked about Turkey's plan to destroy every trace of Christian present on the island of Cyprus. This was reported by the Greek information agency, Romfea.

"We told him," related the Archbishop upon his return from Brussels, "that the Turks want to wipe every trace of Christian presence on our motherland, which is occupied by Turkish forces, from the face of the earth, and that the majority of all monuments all already under threat of total eradication.

Archbishop Chrysostom assured Mr. Füle that Cyprus has never experienced any problems with Turkish Cypriots, and is not experiencing them now. The problem is basically with Ankara, noted the Primate of the Cypriot Church. In his opinion, the presence on Cyprus of colonists from Turkey and the Turkish military contingency is an abuse of human rights and religious freedom.

Fule on his part assured the Archbishop that he would relate these concerns to the Turkish side.