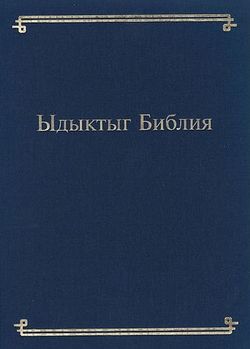 The complete Bible has been translated into only 450 world languages. Out of all the languages of Russia (other than Russian) only the Chuvash and Tyva languages are included in that number.

The translation of the Bible into the Tyva language is the result of twenty years of work by a group of scholars and translators. Participating were: N. Sh. Kuulara, E. B. Mizhita, M. A. Kuzhyget, L. S. Mizhit, V. Y. Voinov, T. G. Kandaurova, S. N. Sycheva, D. Clark, A. S. Desnitsky, E. O. Samba, and many others.

The text of the Bible translation passed an approval process by native speakers and a scholarly review board. The translation will be released as a publication of the Institute of Languages, Russian Academy of Sciences.

A publication of a complete translation of the Bible in the Tuva language was preceded by such biblical texts and the New Testament (2001), a Bible for children (2001), Four Books of Ancient Israel, which included the books of Ruth, Esther, the Lamentation of Jeremiah, and the Book of the Prophet Jonah (2003), the Pentateuch, the Psalter, and the Book of Proverbs (2006).

A presentation of the Bible in the Tuva language will be organized in cooperation with the Ministry of Culture of the Republic of Tuva, and is scheduled to take place in Kyzyl in early September.