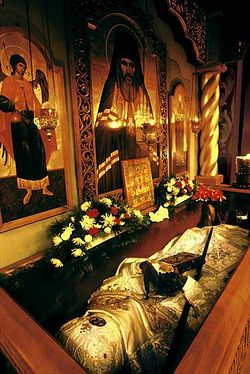 On Tuesday, October 25, 2011, in accordance with a decision by the Diocesan Council of Western America, clergymen of the diocese performed the rite of revestment of the uncorrupt relics of St John of Shanghai and San Francisco. This special rite was headed by His Eminence Archbishop Kyrill of San Francisco and Western America along with His Grace Vicar Bishop Theodosius of Seattle in San Francisco’s Cathedral of the Mother of God “Joy of All Who Sorrow.”

Having made confession in advance and asking forgiveness of each other, the archpastors and priests performed a moleben to St John at 9 pm, after which they proceeded to perform the rite of changing the vestments. Every priest of the Western American Diocese was able to participate in this rite. The attending protodeacons then intoned the corresponding prayers after the revestment of the holy man’s relics.

Details of this event will be forthcoming, along with a report on the Pastoral Conference of the Western American Diocese on its official website.