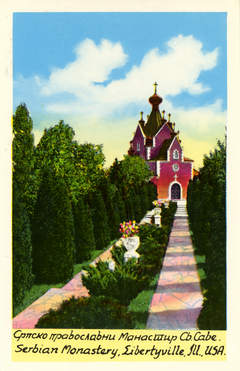 St. Sava Serbian Orthodox Church and Monastery has been a landmark in Libertyville for more than 85 years.
Drive down a quiet stretch of Milwaukee Avenue just three miles north of Libertyville and you’ll find a unique Byzantine-style church on the east side of the road.

The origin of the church dates back to 1921 when bishops of the Serbian Patriarchate realized the pressing need to serve North American immigrants. They were assisted by a Chicago parish priest, Uskovich Mardary, who agreed to solicit funds. Without a car or money of his own, he literally walked the Midwest collecting change. Remarkably, by 1923 he had enough money to buy acreage at the present site. Later Mardary became the first resident bishop and oversaw the construction of the monastery, a task that became quite challenging.

Officials ran out of money when only two-thirds of the monastery buildings were completed in 1927. The church was finally dedicated in 1931, but remaining construction lingered over a period of 50 years. According to the Independent Register newspaper, thousands of Serbian pilgrims attended the church dedication, along with important dignitaries. Besides high clergy, the Yugoslavian ambassador to the United States and his consul generals made the trip to Libertyville.

During this time in Europe, clashing political passions ignited unrest and more reasons to immigrate. King Alexander I attempted to create a union of Slovenes, Croats and Serbs calling the new “Versailles state” Yugoslavia in 1929. His imposed unity created clashes within his new country, as well as with emerging Fascists in Italy, Nazis in Germany and Communists in Russia. The King was assassinated in 1934 and he was succeeded by his11-year old year son Peter II. Hitler’s invasion of Yugoslavia in 1941 ended the regency and exiled King Peter to England. After World War II, the king was deposed by Tito while he was still in exile. He later moved to the United States where he remained until he died in 1970. Communist rule made burial in his homeland impossible, so he found his final resting place at St. Sava.

In 1979, the National Register of Historic Places recognized St. Sava as “a noteworthy example of Eastern European Church architecture.” A final phase of construction was completed shortly after this time, but restoration has been on-going over the years. The classic exterior features include rosette windows, copper roofs, stepped gables and painted icons above the entrances. Thirteen distinctive onion domes represent Jesus and the twelve apostles. The pew-less interior has terrazzo flooring, crown-shaped chandeliers and walls ornately decorated with beautiful frescos and icons. King Peter’s crypt is to the left of the nave. Other outstanding patriots are memorialized on the grounds.

Today St. Sava trains seminarians and preserves religious traditions for its church members across North America, but it also shares an interesting piece of local history with our community.

Arlene Lane and Sonia Schoenfield are members of the Libertyville-Mundelein Historical Society and librarians at the Cook Memorial Public Library. Their monthly column explores historical topics and events local to Libertyville, Mundelein, and Vernon Hills. To suggest a topic or to provide feedback, contact them at likref@cooklib.org