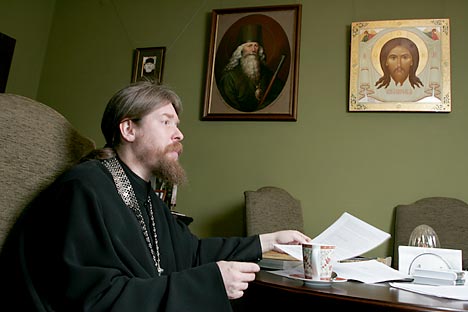 One of the most popular books among Russian readers right now could be considered a modern version of The Lives of the Saints, Everyday Saints, a book about the lives of monks and priests written by a monk is sitting on the Russian bestseller lists and selling out its print runs.

In September 2011, the Olma Media Group debuted a new book at the Moscow Book Fair. The book was Everday Saints by Archimandrite Tikhon Shevkunov, abbot of the small, yet very active Sretensky Monastery, and it tells miraculous – albeit true – stories from the lives of contemporary Orthodox monks and priests. Olma already bet big on the book, giving it a 60,000 copy first print run – five to ten times higher than a standard first printing. Nevertheless, few saw the real miracle coming – the book has made it on to the list of bestsellers in Moscow bookstores and has remained there for many months; there have already been four editions and the total number of copies exceeds 800,000. Online bookseller Ozon.ru has nominated Everyday Saints for the Runet award and it is leading the popular vote for the prestigious«Bolshaya Kniga» (Big Book) Prize. Archimandrite Tikhon’s book has been translated into Serbian, Greek and French, it is being translated into English and talks are underway to have the book translated into German, Italian and French.

The book has become a way for ordinary Russians to learn about religious life. The stories do not seem like the typical relgious literature written for neophytes, which combine a Soviet-style didactic tone with tried-and-true parables from the Bible; these are abundant in any Russian church shop. The stories are also unlike the other kind of religious literature common in Russia – more philisophical texts that require some preparation and knowledge of the faith to appreciate. Everyday Saints is a book accessible to all readers.

Secular writer and playwright Pavel Sanaev says that modern Russian literature was missing such a book. “You can find out from this book what faith is all about. The book clarifies many doubts that someone might have. We have been missing a book with contemporary life stories,” Sanaev said.

Archpriest Maksim Kozlov, a philologist and rector of the Church of Holy Martyr Tatiana at Moscow State University, said: “Father Tikhon’s book has filled a gap that we all sensed; we have all been looking forward to having a book like this. The book tells about the life of the Russian Church, about a whole continent that remains undiscovered by most of our fellow countrymen, but it uses a language and raises the issues in a context that is interesting not only to the narrow circle of churchgoers, but also to a broader audience. This book is a unique success; the author managed to get through to all audiences, and everyone sees something special, both“extrinsic” people and those close to the Church. It is a comfort to all of us, already aware of these stories to a certain extent, to reread them. It is clear now that Everyday Saints is not a book for a day or even a year.”

The success of Everyday Saints has prompted publishers to take a closer look at writers who tell stories of contemporary church life, including books by author writer, Olesya Nikolaeva. Nikolaeva is a professional poet, writer and lecturer at the Literature Institute, but as the wife of a priest, Vladimir Vigilyansky, she is well aware of the church world. Nikolaeva’s works have been published by the big Russian publishing houses Eksmo and AST, but editors there admit that she has been praised mostly as an author of good romantic prose for women rather than Orthodox prose.

One of the most successful Orthodox series is “Nastya and Nikita,” a series for young readers. The project by the Foma publishing house was rolled out three years ago. The series was originally designed as a children’s supplement to a magazine, but the popularity of the stories eventually demanded that the series be spun off. The core of the series consists of thin illustrated paperbacks for children aged five to 11. Two books are available at the beginning of each month, with print runs of 5,000 copies each. The most successful editions are sold within a few months. These books are sold at the publisher’s price – “Nastya and Nikita” is a non-profit project aimed to provide children with affordable high quality literature in addition to the classics that helped educate their parents. The authors of the stories are selected through an Internet contest. The “Nastya and Nikita” books have not been translated into other languages yet, although there have been proposals as the series is well known abroad; foreign readers order books by filling in forms on the website. The books of this series are read even in New Zealand.