Statistics inexactly reflect the role of the Church in Russia, according to Metropolitan Hilarion (Alfeev) 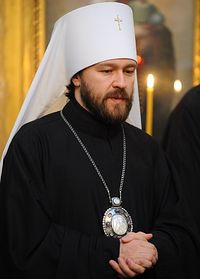 On February 16, in the program, "The Church and the World", the head of the Department for the external Church relations noted that statistics are unable to reflect role of the Church in Russia adequately:

"Whom can we call “religious”? Those who go to church each Sunday? Who go once a month? Or who go several times a year? Statistics show that those who go to church several times a year make up much more than 10%; they make up at least 50%, and that is already a considerable number. Besides, it is one thing to go to church, and another thing to participate in the Sacraments, and yet another to live as a Christian. I believe that no statistics can combine these criteria."

The Orthodox hierarch recalled the numerous pilgrims to the Belt of the Mother of God in Moscow: "It is absolutely evident to the "unaided eye" that today the Orthodox Church is playing a huge role in lives of people. Do you remember television reports on bringing of the Belt of Mother of God to Russia? There was no special advertisement, no special PR; people just learned about this relic, formed a queue, and several million people went before this Relic for a very short period of time. What does it mean? It means that religion is needed, that people need the Church, that people long for the Church; and no attacks, no aggressive acts or information campaigns can shake people's love for it.

“People go to church and reach for the Church all the same. This is its moral and social role which nobody can ever take away from it."