Cookisto: A new Greek way of getting dinner

The traditional way of getting dinner is buy food and cook it, or to go to a restaurant. But what if someone in a nearby street has cooked more than they need and is ready to share it for a small fee? It's already happening in the Greek capital and will soon be starting in London. 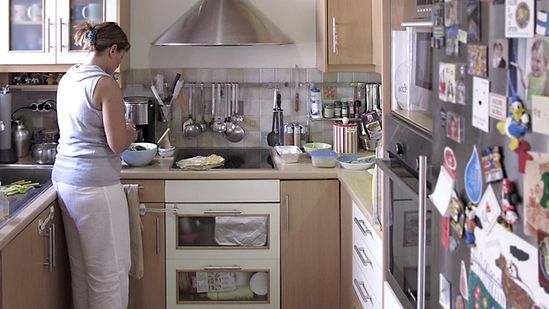 "It is a win-win situation," says the 26-year-old Gkontas. "The cooks get to earn a little extra, while foodies get nutritious home-cooked dishes for cheaper than if they were to get a takeaway."

He is one of many young Greeks turning to the start-up scene following the rise of unemployment to a staggering 27.9%, and the rapid shrinkage of the once-bloated public sector - long the natural choice for many graduates.

For Zachou, the extra money she makes from Cookisto, about 200 euros (£168) a month, goes towards the supermarket shop.

"It's not all about the money," she says. "I feel we are pulling together in the crisis. Many students are struggling to make ends meet. I've been there… fed up of eating bread and takeaways. It's nice I can provide them with food their mothers would cook and for very little."

It's all part of what Sydney-based innovation consultant Rachel Botsman calls the "revolution" of collaborative consumption, or the sharing economy. Since the global financial meltdown, "people have reverted to old market behaviours that involve trust - swapping, sharing, renting, bartering", she says.

Cookisto joins the likes of Airbnb (bed and breakfast), Lyft (ride-sharing), Liquidspace (space rental) and Taskrabbit (deliveries and errands) - all occupiers of this online space where trust and online credibility is crucial to success. The reviews say it all.

"It's what monkeys are born and bred to do, share and co-operate," Botsman says. "These sites generate the social glue of trust between strangers. Ultimately, a shift is happening from institutional trust to peer trust."

Office worker Dimitris Coustas buys at least one lunch from Cookisto most weeks.

"The cooks deliver the dishes to you themselves," he says. "Sometimes they add a free dessert to encourage you to choose them again next time. It's funny, sometimes the housewives will ask if you have ordered from anyone else on the site and enquire how their food rates compared to others'. I think there is quite a bit of competition!" 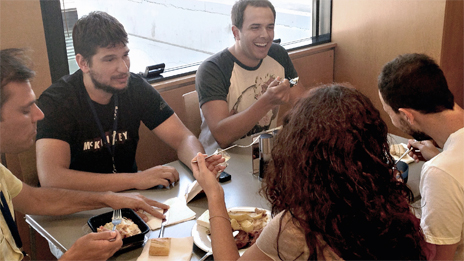 Dimitris Coustas (in white and grey T-shirt) and friends

Cookisto has no way of monitoring the hygiene of the cooks' kitchens or checking the freshness of ingredients, but it urges users to post truthful reviews.

"At first it felt a little dodgy, ordering food from someone you don't know," says Coustas. "You think, 'Who are they? Who is this? What will it taste like? What if it makes me ill?' There is huge trust involved."

In Greece, the Cookisto community has spread outside the internet realm, with users organising get-togethers and feedback sessions. Evangelia Tavladoraki, a political scientist by training, says being part of that community has helped her gain new confidence after the shock of unemployment.

"Every day I feel proud helping others. And the best reward I can get is when people tell me how much they like my food," she says. "This is another road I have gone down because of the crisis. I didn't study cookery. But it makes me feel optimistic."

She is even considering opening her own business. Her marinated sweet and sour chicken sells out in minutes, which appears to indicate that demand for ethnic food in Athens outstrips supply.

Exactly which dishes make Londoners' mouths water will become clear in the next few weeks when Cookisto makes its first foray into the UK. Perhaps they will order from the ex-lawyer, who has a YouTube cooking channel, the Italian stay-at-home mum, or the recent history graduate who followed up her studies with classes at Le Cordon Bleu.

Currently one of the nearest dishes online is 2,134km away in Athens - stuffed peppers and rice by Efi.

Although Gkontas says he came up with Cookisto "to solve his greatest daily problem - access to delicious homemade food", Nikki Finnemore, who is handling the UK launch, is keen to emphasise that this peer-to-peer marketplace is about more than lunch or dinner.

"It's the experience of trusting a relative stranger to make a meal for you and to then meet for a face-to-face exchange."

Marilena and her moussaka
Marilena's moussaka

Slice the aubergines, salt well and leave to stand for 30 minutes. Rinse well and dry with kitchen roll.

Preheat the oven to about 180C.

Put the sliced aubergines and potatoes on a non-stick tray, brush with olive oil and bake for 20-30 minutes until brown.

Fry the onion and meat in olive oil until brown. Add pepper, salt, paprika, tomatoes and stock and simmer for about 20 minutes.

Layer the aubergines and potatoes in a baking dish, then add the meat. Sprinkle over cheese and then pour the milk mixture on top. 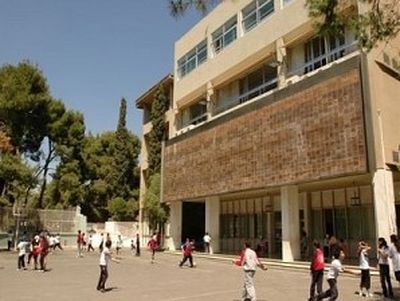 Food Bank Gives Hope to Starving Students in Greece Local residents and the municipality of Messolonghi decided to establish a food bank to face the multiple cases of students almost fainting due to hunger.

Church gives over 2 tons of food to refugees from the Ukraine According to the government, 271 centers of temporary accommodation are open in border areas of Russia, where over 27,000 displaced people are staying
Комментарии
Войдите через FaceBook ВКонтакте Яндекс Mail.Ru Google или введите свои данные: