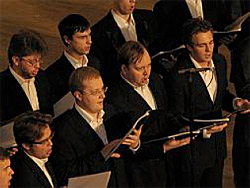 Every so often, a Russian performing group rides through town and brings out what seems to be the entire Russian emigre community, filling one of the largest halls to capacity. Its program typically offers a serious or traditional first half followed by arrangements of favorite tunes from the war years or Soviet cinema. As the tunes grow more familiar, culminating in ever-popular bonbons such as Moscow Nights or Ochi Chornaya, the audience becomes ever more enthusiastic. Friday’s performance at Davies Symphony Hall of Moscow’s Sretensky Monastery Choir, under the direction of Nikon Zhila, was such an occasion.

For devotees of the choral art — particularly Americans, who rarely hear good, large male-voice choirs comprised of fully trained voices — the concert was a treat, as well. This 40-voice male choir sounds fantastic in its genre, singing with polish and consistently perfect intonation. It offers a full-voiced, bright, and versatile but unmistakably Russian tone. The choir, even at its quietest pianissimo, easily filled the 2,743-seat Davies Hall.

If I were to offer any complaint, it would be to find fault with the too-popular programming (popularity here being defined as the audience’s ability to sing along to every tune from 1960s Soviet cinema, as the woman behind me could and did). This was probably a necessary step on the tour organizers’ part to attract the emigre crowd, but it deprived the audience of hearing this choir in its core genre: the performance of daily services at one of the most revered Russian religious institutions. Thus for me, the best performances of the evening were of the first four selections — arrangements of sacred Russian chant. The program notes requested that the audience hold its applause until after these selections; the resulting lack of wild clapping and whistling avoided some of the State-of-the-Union tmosphere that characterized the remainder of the evening.

Especially moving was Livosky’s Cherubic Hymn, which used the text from the Liturgy of the Presanctified Gifts, rather than the more familiar Liturgy of St. John Chrystostom. The choir began with a dark and intense inner gesture and gradually unfolded its sound into an enthusiastic alleluia. Russian choirs are less given to visible emotion than American ensembles, and the stoicism the men displayed came off as markedly spiritual. Also notably different was the choir’s unison Russian Orthodox "znamennie" chant, Stichera on the Doimition of Theotokos. Unlike the case with Latin chant, the tradition of performing ancient Russian melodies focuses on rhythm and accent. Director Zhila clearly tried to bring out this vigor, both in his direction and in his choice to leave the tenors out of the three-minute chant.

The remainder of the program began auspiciously with the familiar Cossack folksong Akh ty st’ep shirokaya (Oh the steppe, how wide), made famous in the 1970s by the touring Don Cossacks chorus. It was a nice change to hear this beautiful piece sung in tune. The simple arrangement allowed individual sections to show off their tone. Even more impressive in the same plaintive vein was Fyodоr Stepyanov’s choral arrangement of Abaz’s Utro tumannoye (Misty morning), a 19th-century salon romance to a text by Ivan Turgenev. The song allowed the choir to show off its high tenors with the lightest and most beautiful pianissimo high lines. Even professional American choirs would resort to falsetto for this type of singing, but the Russians possess sufficient technique to pull it off.

Six of the choir’s members stepped out in front of the choir to perform solos. Regrettably, there were no chances to hear from the vast repertory of Russian sacred music with soloist, but the choral arrangements of folk songs and popular works did show off the individual voices that influence the quality of the ensemble. In particular, bass Dmitry Beloselsky was outstanding. In 2005, I toured with a choir accompanying famed baritone Dmitri Hvorostovsky, which sang some of the works performed by the Monastery Choir. Beloselsky’s performance of Novikov’s moving ballad Dorogi (Roads) was superior to Hvorostovsky’s. I hope his career goes far.

In the past decade, I have heard a number of touring choirs from the former Soviet states, and all offered similar programs to Sretensky’s. The recently reunited Russian Orthodox Church sponsored this all-Russian program, offered to a largely Russian audience. Although I would consider this choir to be one of, if not the best, choir of this type I have heard in person, I am curious about its true range. How would it sound singing Bach? These voices are so good, they deserve the challenge. 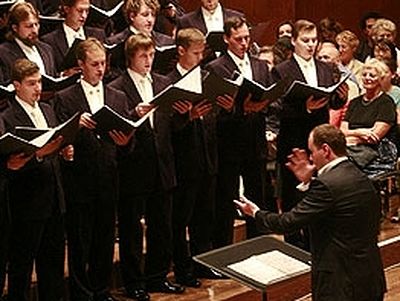 Old Russia, young voices Barrymore Laurence Scherer The group’s youth and freshness belie the age of its home base. Founded in 1395, Sretensky is among the most ancient of Russian monasteries – the original wooden buildings were already nearly 300 years old when they were replaced by the present stone ones in the 17th century. During the Bolshevik era, Sretensky’s monastic community was arrested and either murdered or exiled to prison camps. At a time when many Russian churches were being used as skating rinks or swimming pools, Sretensky’s buildings – in the middle of downtown Moscow – were employed by the KGB as offices and torture chambers. 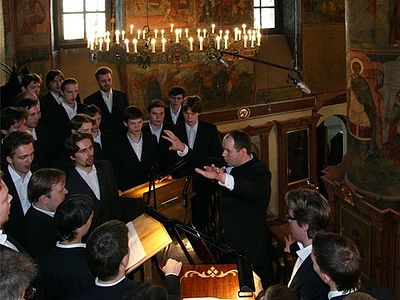 And the raven shall scatter your bones … Luke Harding

And the raven shall scatter your bones … Luke Harding “There is a sacred aspect to Russian folk songs – they are often about death and suffering,” Father Tikhon explains, over a pot of tea in his comfortable residence. “One piece, The Black Raven, is a sort of dialogue with death. It’s about a Cossack soldier going off to battle knowing he is going to die. He speaks of how a bullet will pierce his chest, how his comrades will leave him, and how his wife will marry his best friend. His bones will be scattered across the steppe by wolves and ravens.”

Sretensky Monastery Choir: The Power of Russian Music Cecelia Porter Working from both sacred and secular texts, Moscow Sretensky Monastery Choir filled the Library of Congress’s Coolidge Auditorium on Wednesday night with a vocal luster that extended as far as the expression of reverence and human passion can reach. And the auditorium was filled to the rafters with listeners, the audience including many religious dignitaries in colorful ritual dress.
Комментарии
Войдите через FaceBook ВКонтакте Яндекс Mail.Ru Google или введите свои данные: