The heady spirit of Mother Russia was alive at Avery Fisher Hall last Tuesday as crowds of expatriate Russians and Ukrainians, including a picturesque contingent of black-robed clergy, formed a sell-out audience for the Moscow Sretensky Monastery Choir. This appearance was the choir’s first stop as it tours the U.S. and Canada through Sept. 14, before heading off to Australia and Europe.

The group’s youth and freshness belie the age of its home base. Founded in 1395, Sretensky is among the most ancient of Russian monasteries – the original wooden buildings were already nearly 300 years old when they were replaced by the present stone ones in the 17th century. During the Bolshevik era, Sretensky’s monastic community was arrested and either murdered or exiled to prison camps. At a time when many Russian churches were being used as skating rinks or swimming pools, Sretensky’s buildings – in the middle of downtown Moscow – were employed by the KGB as offices and torture chambers.

In 1994, after the collapse of the Soviet Union, the monastery was returned to the Russian Orthodox Church, and the Sretensky Choir was organized shortly thereafter. Singing several times weekly in the monastery church, the choir apparently heightens the Sretensky’s striking atmosphere of peace amid the Russian capital’s urban bustle. It was certainly easy to believe the Sretensky Choir has this ability while listening to it at Fisher Hall, whose bland walls seemed ablaze with icons, so strong was the evocative power of the choir members’ music-making under their admirable conductor Nikon Zhila.

Opening with a set of four sacred chants, these handsome young men, roughly 30 strong, immediately revealed a sterling choral and musical technique – absolutely knife-edge phrase attacks, crystalline diction and, above all, complete integration of the voices into a single unit. Indeed, Mr. Zhila seems to play his singers like a grand organ, with each rank of tenor and bass voices at his fingertips and able to turn phrases on a dime (or kopek).

The opener, «God Is With Us: Hymn From the Great Compline,» contained a lovely series of tenor and bass solos – sung by members of the choir. Count F. Lvovsky’s arrangement of the ancient chant «Now the Powers of Heaven: Cherubic Hymn From the Divine Liturgy of the Pre-Sanctified Gifts» is a fine example of 19th-century Romantic Russian revivalism, with exquisite four-part writing like that of Schumann or Brahms, and the deep bass line in the old Slavonic manner complemented by a softly flowing melody for high tenors. As arrangements of early Russian music these four sacred pieces illustrate in miniature the rich legacy out of which flow the great services composed by more famous composers like Tchaikovsky and Rachmaninoff.

The sacred music was followed, before and after the intermission, by a beguiling series of folk songs, Cossack songs, and romances wonderfully varied in mood and color, with various choir members stepping forward as soloists. There were essays in pure atmosphere, such as «Ah, the Steppe So Wide,» with its haunting minor-key melody over sustained humming, and «Down the Mother Volga,» in which the gradual crescendo from a whisper to a clarion cry before dying down tonally paints the image of a storm breaking over the ancient river that many Russians regard as the nation’s earth-mother. There were stirring military songs, like «The Battalion Has Advanced» – the ensemble delivering a galloping «Drumm-da-da-drumm-da-da-drumm» accompaniment to a martial bass solo (splendidly sung by Evgeny Stavinsky) – and the tragic «The Enemy Burned My Family Home,» one of several numbers in which the commanding bass-baritone soloist Dmitry Beloselsky held the audience spellbound.

The romances struck an especially sweet note of nostalgia – «The Waves of Amur,» a choral waltz song in successive contrasting sections like a ballroom dance; the beautiful «Evening Bells,» in which gentle-voiced soloist Andrey Bashkov sang the old tune to bell imitations by the choir. In the old love song «Moscow Nights,» which enjoyed a firm place in the repertoire of Gypsy orchestras and dance bands between the world wars, we were treated to lovely solo crooning by a young and appealing tenor, Anton Sergeev (unnamed in the program). And I would give my remaining wisdom tooth to hear again Mr. Beloselsky and his Sretensky colleagues sing «The Steppe Is All Around,» the last words of a dying coachman far from home, who asks a companion to bury him and take his wedding ring back to his wife.

Throughout the program, which they sing entirely unaccompanied, the extraordinary variety of choral textures not only kept the musical interest fresh but truly obviated the usual desire for balalaikas or other instruments. And one’s hat is off to the versatility of three of the choir members, Fedor Stepanov, Alexander Amerkhanov and Andrey Poltorukhin, credited in the program with some of the choral arrangements.

The evening ended, not unexpectedly, with a series of encores, starting off with a surprising up-tempo gospel rendition of the spiritual «Go Down Moses,» in English, with Evgeny Stavinsky taking the lead again. As I walked up the aisle amid the deafening applause, a priest, his long silver hair and beard complemented by the impressive silver cross and chain cushioned upon his ample girth, touched me lightly on the arm and said, in a rolling basso, «I hope you liked our music.» If my response was drowned out by the clamor, I hope my smile told him all. 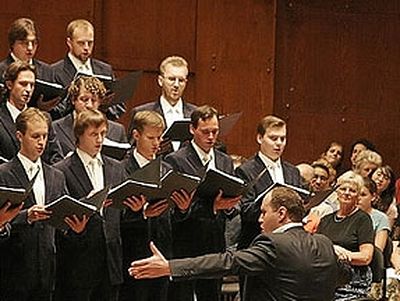 Voices of Russian History, From Churches and Battlefields

Voices of Russian History, From Churches and Battlefields Steve Smith The 41 singers, however young they appeared, had clearly mastered the dense, nasal tone and luminous blend characteristic of Russian choral tradition. “God Is With Us,” ascribed to a Father Vasiliev, established a bold, assertive tone in lines of surprising rhythmic bounce. “Stichera on the Dormition of Theotokos,” an anonymous chant, demonstrated the severe 17th-century Znamenny style that predated an incursion of Western musical values. 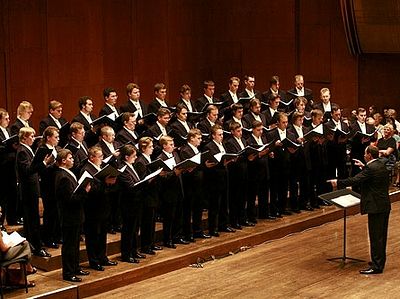 Sacred Sound And Sheer Beauty Fred Kirshnit On the occasion of the reunification of the Orthodox Church within Russia to the greater Russian Orthodox Church, the 41-member choir is touring the world, singing primarily in sacred spaces but also taking some time out for public concerts. On Tuesday evening at Avery Fisher Hall, there was no room left for procrastinators, and the management had to provide seats on the stage to accommodate the overflow crowd. 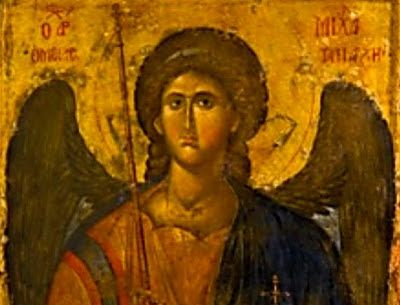 Byzantine Art Travels to the US

Byzantine Art Travels to the US Two film productions, one from the National Gallery of Art in Washington and one from the Greek Ministry of Culture, will be made at archaeological sites and monuments in Greece in the coming months.
Комментарии
Войдите через FaceBook ВКонтакте Яндекс Mail.Ru Google или введите свои данные: