Holy Martyrs, the Brothers Isaak and Ioseb the Georgians (†808) 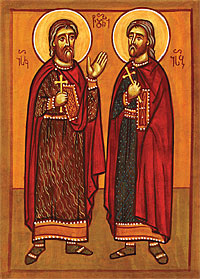 The holy martyrs Isaak and Ioseb the Georgians were born into a Muslim family, but their Georgian mother, a Christian, secretly raised them according to the Christian tradition. The brothers were so firmly dedicated to the Faith that they journeyed to Byzantium to request that Emperor Nicephorus I Phocas (802–811) permit them to settle in his capital. The pious ruler extended a warm welcome to the brothers, who were already well known and respected by the nobility of Theodosiopolis (Karnu).

Learning of the brothers’ intention, the emir of Theodosiopolis demanded to know the reason for their journey to Constantinople. The brothers answered him openly, citing their Christian Faith as the reason for their journey. Hearing this, the emir was infuriated, but he did not want to kill the brothers, since they were deeply respected by the people of his city. Instead he resolved to convert them from the Christian Faith.

Isaak and Ioseb’s elderly father tearfully pleaded with them to deny Christ, while the emir promised them every honor and reward for betrayingHim, and terrible suffering and death in the case of their refusal.

But the holy brothers answered the emir, saying, “Remember that the flesh is like grass and every glory of this earth is like a flower that grows in the grass. When the grass withers, the flower also dies (c.f. Isaiah 40:6–7). Your threats of torture and death are for us rather absurd, for neither death, nor life, nor angels, nor principalities, nor powers, nor things present, nor things to come, nor height, nor depth, nor any other creature shall be able to separate us from the love of God which is in Christ Jesus our Lord (Rom. 8:38–9).”

The young men’s boldness enraged the emir, and he ordered his servants to execute them.

Before the holy brothers gave up their souls, they knelt to the ground and prayed: “O Holy King and Father of our Lord Jesus Christ, look down upon Thy servants with mercy and receive us as a holy sacrifice. Number us among Thy martyrs and make us worthy of the crown of righteousness, for every good and perfect gift is from above and comes down from Thee, the Father of lights (c.f. James 1:17)!” Then they bowed their necks beneath the sword.

The executioners chopped off their heads, leaving their bodies untouched. That night their holy remains shone with a radiant light. This miracle frightened the godless persecutors, and they ordered the local Christians to bury the holy martyrs’ remains. The local bishop and clergy committed their bodies to the earth with great reverence. A church was later erected over the place where Sts. Isaak and Ioseb were laid to rest.

O Holy Martyrs Isaak and Ioseb, remember us who honor your holy memory and intercede with Christ God for the remission of our sins! 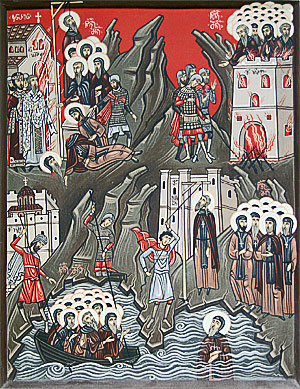 Holy Martyrs Killed by the Latins at the Iveron Monastery on Mt. Athos (13th century) Commemorated May 13/26

Holy Martyrs Killed by the Latins at the Iveron Monastery on Mt. Athos (13th century) Archpriest Zakaria Machitadze Georgian monks began to settle on Mt. Athos in the middle of the 10th century, and a Georgian monastery, Iveron, was founded there not long after. At that time foreign armies were constantly invading Mt. Athos. In the 13th century the Crusaders stormed through the region, and between 1259 and 1306 the pope’s private army devastated Mt. Athos several times. 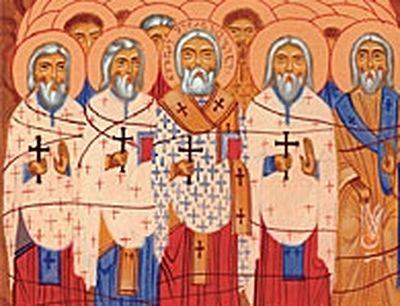 Holy Martyrs Metropolitan Nazar of Kutaisi-Gaenati, Priests German, Ieroteos and Simon, Archdeacon Besarion, and All the New Martyrs of the Totalitarian Regime (†1924) Archpriest Zakaria Machitadze Metropolitan Nazar of Kutaisi-Gaenati was born in 1872 in the village of Didi Jikhaishi in Imereti. His forefathers belonged to a long lineage of clergy, and the future metropolitan was nurtured in the Church from the earliest years of his youth.
Комментарии
Войдите через FaceBook ВКонтакте Яндекс Mail.Ru Google или введите свои данные: