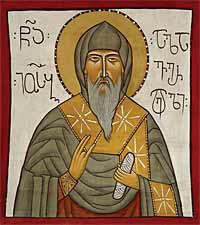 Blessed Abba Ioseb of Alaverdi was a disciple and companion of St. Ioane of Zedazeni, who in the 6th century arrived in Georgia with twelve Syrian ascetics to spread the Christian Faith.

With the blessing of his teacher, Fr. Ioseb settled in the village of Alaverdi in eastern Georgia. According to tradition, he carried with him a cross formed from the wood of the Life-giving Cross of our Savior.

At that time the region around Alaverdi was deserted and barren. One day the Lord sent a nobleman to hunt in the valley where the pious hermit dwelt among the wild animals. Seeing the saint, the nobleman guessed immediately that before him stood a holy man. He bowed before him, kissed him, and humbly asked what had brought him to this deserted place.

With the help of God, St. Ioseb aroused in the nobleman a divine love and an unquenchable desire for the Truth. The nobleman vowed to erect a church in the Alaverdi Wilderness, and he laid the foundations of Alaverdi Monastery in fulfillment of this vow. Venerable Ioseb was overjoyed at the accomplishment of this God-pleasing work.

Soon the people began to hear stories about the holy elder who was laboring in Alaverdi. Crowds of the faithful flocked there to see him with their own eyes and hear the blessed Ioseb’s preaching. As a result of his unceasing efforts, unbelief was uprooted, and the divine services of the Church were firmly established in that region.Many of the faithful were so drawn to Abba Ioseb’s holy life, boundless love, and miracles that they left the world to join in his labors. Gradually the number of hermits increased, and a large community was formed. Fr. Ioseb was the first abbot of this brotherhood.

Utterly exhausted from a life of God-pleasing ascesis and labors, St. Ioseb sensed the approach of death and prepared to stand before the Lord God. He gathered his disciples, blessed them, instructed them for the last time, appointed a new abbot, and peacefully departed to the Lord.

With great honor Fr. Ioseb’s disciples buried him at the Alaverdi Church. Many miracles have since occurred over the grave of the venerable elder.

The Georgian nation rejoices on this thy feast and worships the Lord, Who bestowed upon His people a tender and protecting father. By entering thy holy temple, we receive great mercy from God, O Holy Father Ioseb!

Saint Ioane (Chrysostom) the Catholicos (†1001) Archpriest Zakaria Machitadze Catholicos Basil III’s “Story of St. Shio’s Miracles” describes how the hitherto childless parents of St. Ioane prayed at length to St. Shio of Mgvime. After the birth of Ioane, his God-fearing parents sent him to be raised at Shio-Mgvime Monastery. There he acquired the sanctity and wisdom for which he would later be called “Chrysostom,” meaning “golden mouth” in Greek. By this name he has been known throughout the history of the Georgian Church.

Venerable Ekvtime of Mt. Athos, the Translator(†1028) Archpriest Zakaria Machitadze Venerable Ekvtime of Mt. Athos was the son of St. Ioane of Mt. Athos, a military commander during the reign of King Davit Kuropalates, who abandoned the world to enter the monastic life.While St. Ioane was laboring on Mt. Olympus, the Byzantine emperor returned a large portion of the conquered Georgian lands, but in exchange for this benefaction he ordered that the children of certain eminent aristocrats be taken to Constantinople as surety.