Holy Queen Ketevan was the daughter of Ashotan Mukhran-Batoni, a prominent ruler from the Bagrationi royal family. The clever and pious Ketevan was married to Prince Davit, heir to the throne of Kakheti. Davit’s father, King Alexandre II (1574–1605), had two other sons, Giorgi and Constantine, but according to the law the throne belonged to Davit. Constantine was converted to Islam and raised in the court of the Persian shah Abbas I.

Several years after Davit and Ketevan were married, King Alexandre stepped down from the throne and was tonsured a monk at Alaverdi. But after four months, in the year 1602, the young king Davit died suddenly. He was survived by his wife, Ketevan, and two children — a son, Teimuraz, and a daughter, Elene — and his father ascended the throne once more.

Upon hearing of Davit’s death and Alexandre’s return to the royal throne, Shah Abbas commanded Alexandre’s youngest son, Constantine-Mirza, to travel to Kakheti, murder his father and the middle brother, Giorgi, and seize the throne of Kakheti.

As instructed, Constantine-Mirza beheaded his father and brother, then sent their heads, like a precious gift, to Shah Abbas. Their headless bodies he sent to Alaverdi.[1] The widowed Queen Ketevan was left to bury her father-in-law and brother-in-law.

But Constantine-Mirza was still unsatisfied, and he proposed to take Queen Ketevan as his wife. Outraged at his proposition, the nobles of Kakheti rose up and killed the young man who had committed patricide and profaned his Faith and the throne. Having buried the wicked Constantine-Mirza with the honor befitting his royal ancestry, Ketevan sent generous gifts to Shah Abbas and requested that he proclaim her son,Teimuraz, the rightful heir to the throne. While she was awaiting his reply, Ketevan assumed personal responsibility for the rule of Kakheti.

Concerned that, if he denied this request, Kakheti would forcibly separate from him and unite with Kartli, Shah Abbas hastily sent Prince Teimuraz to Georgia, laden with great wealth.

In 1614 Shah Abbas informed King Teimuraz that his son would be taken hostage, and Teimuraz was forced to send his young son Alexandre and his mother Ketevan to Persia. As a final attempt to divide the royal family of Kakheti, Shah Abbas demanded that the eldest prince, Levan, be brought before him, and he finally summoned King Teimuraz himself.

The shah’s intentions were clear: to hold all of the royal family in Persia and send his own viceroys to rule in Kakheti. He sought to eliminate King Luarsab II of Kartli as well, but Teimuraz and Luarsab agreed to attack the Persian army with joint forces and drive the enemy out of Georgia.

Shah Abbas sent his hostages, Queen Ketevan and her grandsons, deep into Persia, while he himself launched an attack on Kakheti. With fire and the sword the godless ruler plundered all of Georgia.

The royal palace was razed, churches and monasteries were destroyed, and entire villages were abandoned. By order of the shah, more than three hundred thousand Georgians were exiled to Persia, and their homes were occupied by Turkic tribes from Central Asia. Hunger and violence reigned over Georgia.

After they had spent five years exiled in Shiraz (Persia), the princes Alexandre and Levan were separated from Ketevan and castrated in Isfahan. Alexandre could not endure the suffering and died, while Levan went mad.

St. Ketevan, meanwhile, remained a prisoner of the ruler of southeastern Persia, the ethnic Georgian imam Quli-Khan Undiladze, who regarded the widowed Queen of Kakheti with great respect. According to his command, Ketevan was not to discover the fate of her grandsons.

Queen Ketevan spent ten years in prison, praying for her motherland and loved ones with all her might and adhering to a strict ascetic regime. Constant fasting, prayer and a stone bed exhausted her previously pampered body, but in spirit she was courageous and full of vitality. She looked after those assigned to her care and instructed them in the spiritual life.

After some time Abbas resolved to convert Ketevan to Islam, and he announced his intention to marry her. He asked that his proposal be conveyed to her the same day she was informed of the fate of her grandsons. As a condition of their marriage, Abbas insisted that Ketevan renounce the Christian Faith and convert to Islam. In the case of her acquiescence, Imam Quli-Khan was to respect and honor her as a queen, and in the case of her refusal, to subject her to public torture. The alarmed imam begged the queen to submit to the shah’s will and save herself, but the queen firmly refused and began to prepare for her martyrdom.[2]

Queen Ketevan was robed in festive attire and led out to a crowded square. Her persecutors subjected her to indescribable torment: they placed a red-hot copper cauldron on her head, tore at her chest with heated tongs, pierced her body with glowing spears, tore off her fingernails, nailed a board to her spine, and finally split her forehead with a red-hot spade.

St. Ketevan’s soul departed from her body, and the executioners cast her mutilated body to the beasts. But the Lord God sent a miracle: her holy relics were illumined with a radiant light.

A group of French Augustinian missionary fathers, who had witnessed the inhuman tortures, wrapped Queen Ketevan’s body in linens scented with myrrh and incense and buried it in a Catholic monastery.

Some time later the holy relics of Great-martyr Ketevan were delivered to her son, Teimuraz, King of Kakheti.

Teimuraz wept bitterly for his mother and sons and buried the relics with great honor in the Alaverdi Cathedral of St. George.

Athirst with holy desire thou didst suffer many wounds, endure countless tortures, and renounce earthly majesty to draw nearer to the Heavenly Kingdom. O thrice-blessed Ketevan, entreat Christ God to have mercy on our souls!

[1] Since the beginning of the 11th century, Alaverdi had been the resting place of the Kakhetian kings.

[2] According to one foreign observer, her steadfastness delayed the Islamization of the Georgians in : “In the course of a conversation at the court of Shah Abbas, where a young and recently converted Georgian was present, the question arose as to why it was that, while all young Georgians were forced to embrace Islam, their mothers were not. The explanation given by one of those present was that since the Queen would not change her faith Georgian mothers likewise refused.” (Z. Avalishvili, “Teimuraz I and His Poem ‘The Martyrdom of Queen Ketevan,’” Georgica [vol I, no. 4/5, 1937] pp. 22.)

Holy Confessors Ioane (Maisuradze) and Giorgi-Ioane (Mkheidze) (†1957 & †1960)
Commemorated September 8/21
Archpriest Zakaria Machitadze
Archimandrite Ioane (Basil Maisuradze in the world) was born in the town of Tskhinvali in Samachablo around 1882. He was raised in a peasant family and taught to perform all kinds of handiwork. Basil was barely in his teens when he helped Fr. Spiridon (Ketiladze), the main priest at Betania Monastery, to restore the monastery between 1894 and 1896. 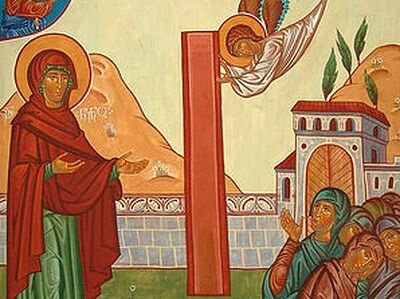 The Feast of the Robe of our Lord, the Myrrh-streaming and Life-giving Pillar, Equals-to-the-Apostles King Mirian and Queen Nana, and Saints Sidonia and Abiatar (4th century)
Commemorated October 1/14; Archpriest Zakaria Machitadze

The Feast of the Robe of our Lord, the Myrrh-streaming and Life-giving Pillar, Equals-to-the-Apostles King Mirian and Queen Nana, and Saints Sidonia and Abiatar (4th century)
Commemorated October 1/14
Archpriest Zakaria Machitadze
During the reign of King Aderki of Kartli, the Jewish diaspora in Mtskheta learned that a wondrous Child had been born in Jerusalem. Then, thirty years later, a man came from Jerusalem to deliver this message: “The youth has grown up. He calls Himself the Son of God and preaches to us the New Covenant.