Priest in Lugansk: “Nobody even thought of going away, of leaving the church and parishioners” 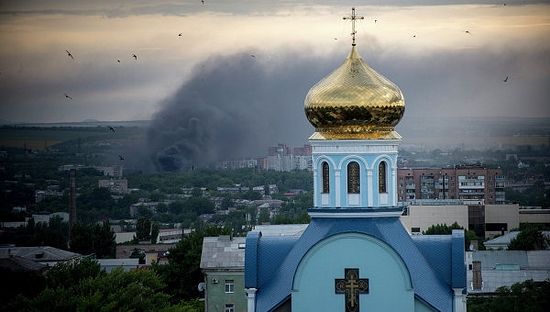 Rector of the Church of the Icon of the Mother of God, “Of Tender Feeling” in Lugansk Archpriest Alexander Ponomarev has related how priests and parishioners went through the terrible months of war, reports the Svete Tikhiy (“O Joyful Light”) portal.

The Ukrainian servicemen shelled this church twice: on August 6 and 21. The church is situated on the territory of the regional clinical hospital for children.

“All the priests at that time stayed in Lugansk,” relates Fr. Alexander, “Nobody even thought of going away, of leaving the church and parishioners. Services were celebrated as usual.

“You know, the city center was shelled with particular zeal. There is the Lugansk People’s Republic government residence near the church. Surely, they aimed at it but they must have understood that all the neighboring buildings were in the shelling zone as well. So on August 6 it was our turn—shells struck the area of our church. The Ministry for Extraordinary Situations informed that the shells most likely had been fired from a 112-calibre long-range gun from the Metallist village area. One shell, though it did not strike the very church, fell within two meters of its wall. Nearly all the stained glass windows were damaged. Shrapnel pierced the church walls. The dome is damaged as well…

“They bombed us, tried to destroy us and shot at all of us…

“When all these events began, the number of people considerably dropped. Many of our parishioners left. The path to our church was also not safe. But on weekends the church was nearly filled with people all the same.

“People came, prayed, confessed. Many of them feared for their own and their relatives’ lives, for their homes. We did our best to console them. With God’s help and by prayers we somehow managed to calm the parishioners and to dispose them to enduring the hardships with patience.

“It was very important for them to see that the church did not disappear, that it was standing and enduring all the trials with the people. They surely could not believe their own eyes, seeing all the destruction. The people did not understand how such things could have happened with their church, their city.

“The people spent nights at the church as well, because, when the south city districts were extensively bombed, it was safer here than at home.

“Church workers remained with them at the church and assisted them as far as possible. We had quickly to acquire a generator so that we could turn on the light inside the church and get water. Every morning people queued up for water here. We distributed it so far as the well allowed, up to half a ton per day. When humanitarian aid from private individuals was brought to the church, we arranged distribution of it among all the needy after services at the church. People venerated the cross and proceeded to our conference hall where they were given packets with food.

“More than once they said that should the churches close, life would become all horror.

“I started to notice that during the most dangerous time, even absolutely non-religious people called at the church. They purchased “Lord, thou hast been our dwelling place in all generations” belts (belts with the text of psalm 90) in great numbers for themselves and their friends.

“Many volunteer corps members came, but I did not see any of the Ukrainian army soldiers.

“Yes, the Church is for everyone. People coming to God may have very different views. Our duty is to hear them all out, to give a little advice, to direct them to the right understanding of things, according to the teaching of the New Testament.

“War is war, but we can by no means deny the fact that the civilian population of Lugansk was shelled by the Ukrainian soldiers.

“All those who stayed in Lugansk are eyewitnesses of the crime that can never be justified, as, I believe, inhuman acts were committed. So many people were killed, so many houses destroyed! Families are separated. And people are our main wealth. How many of them abandoned their possessions and departed! And now they are in distant lands, wherever they have gone: either to Russia or the Ukraine.

“I know that many of them want to return. Our task here is to apply efforts so that people might not be afraid to return to their motherland and to live peacefully, even if it is with only minimum income and comfort”.

Archbishop Mitrophan of Horlivka and Sloviansk: “We did not understand what peace was.” When we had peace, we did not appreciate it; to be more exact, we thought it was the way it should be. Not everything was perfect: we did have problems and difficulties, there were weak points in our life – bother personal and societal. But there was the most important thing: people did not kill each other.
Комментарии