Christians who desire to make progress and to grow ought to force themselves to every good thing, so as to deliver themselves from indwelling sin, and to be filled with the Holy Spirit. 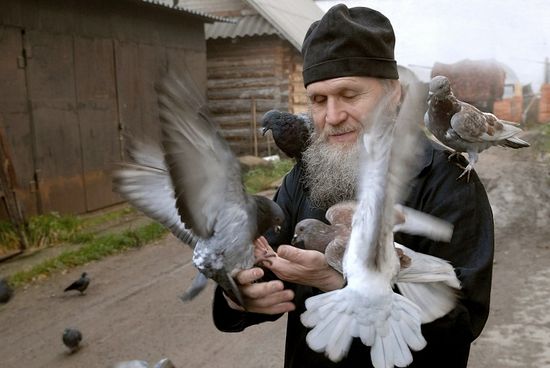 1. The man who desires to come to the Lord, and to be found worthy of eternal life, and to become the dwelling place of Christ, and to be filled with the Holy Spirit, that he may be able to produce the fruits of the Spirit, and perform the commandments of Christ purely and faultlessly, ought to begin by first believing the Lord steadfastly, and giving himself wholly to the words of His commandments, and renouncing the world altogether, that his whole mind may be occupied about nothing secular. And he should persevere continually in prayer, continually waiting in expectant faith for the visitation and succor of the Lord, keeping the aim of his mind always fixed upon this. Then he should force himself to every good work and to all the commandments of the Lord, because of sin that is present with him. For instance, let him force himself to humility of mind in sight of all men, and to consider himself less and worse than them, not seeking honor, or praise, or the glory of men, from anyone, as it is written in the gospel,1 but always having the Lord only before his eyes, and His commandments, desiring to please Him only in the meekness of the heart, as the Lord says, Learn of Me, because I am meek and lowly in heart, and ye shall find rest unto your souls.2

2. In like manner let him accustom himself to be merciful, kind, compassionate, good, to the utmost of his power, as the Lord says, Be ye good and kind, even as your heavenly Father is pitiful;3 and again He says, If ye love Me, keep My commandments;4 and again, Be violent, for the violent take the kingdom of heaven by force,5 and, Strive to enter in by the strait gate.6 Above all things let him keep the humility and conduct of the Lord, and His meekness and behavior, as his pattern, in all never-forgetful memory. Let him persevere in prayers, always beseeching and believing, that the Lord may come and dwell in him, and may perfect and strengthen him in all His commandments, and that the Lord Himself may become the dwelling place of his soul, and thus one day, what he now does by force with a reluctant heart, he may do willingly, accustoming himself always to what is good, and being ever mindful of the Lord, and in much love waiting for Him in the Holy Spirit. Then the Lord, beholding such a purpose, and his good diligence, how he forces himself to the remembrance of the Lord, and ever compels his heart, whether it will or no, to that which is good, and to humility and meekness and charity, and guides it to the best of his power by force, shows mercy upon him, and delivers him from his enemies and from indwelling sin, filling him with the Holy Spirit; and thus afterwards without force or labor he does all the commandments of the Lord in truth, or rather the Lord in him does His own commandments, and then he brings forth the fruits of the Spirit purely.

4. But if a man forces himself only to prayer, when he has no prayer, that he may obtain the grace of prayer, but will not force himself to meekness and humility and charity and the rest of the Lord's commandments, and takes no pains or trouble or striving to succeed in these, as far as purpose and freewill can go, sometimes a grace of prayer is given him, in part, with refreshment and gladness from the Spirit, according to his asking; but in character he is like what he was before. He has no meekness, because he did not seek it with pains, or prepare himself beforehand to become so. He has no humility, because he did not ask for it, or force himself to it. He has not charity towards all men, because he had no concern or striving about it in his asking for prayer; and in the accomplishment of his work, he has no faith and trust in God, because he did not know himself, did not discover that he was without it, or take trouble at any cost to himself, seeking from the Lord to obtain firm faith towards Him and a real trust.

5. For as everyone forces and compels himself to prayer in spite of the reluctance of the heart, so ought he to force himself likewise to trust, and so to humility, and so to charity, and so to meekness, sincerity and simplicity, and so unto all patience and longsuffering (according to that which is written) with joyfulness;9 and so to think little of himself, and to esteem himself poor and last; and so not to engage in conversation to no profit, but always to meditate and speak the things of God with mouth and heart; so also not to be angry or clamorous, according to that which is said, Let all bitterness, and anger, and clamour, be put away from you, with all malice;10 to all the ways of the Lord, to all practice of virtue and of good and noble living, to all behavior of goodness, to all humility of meekness, not to be proud, high-minded, or puffed up, or to speak against any one.

6. To all these things must a man force himself, who desires, to approve himself to Christ and to please Him in order I that the Lord, seeing his earnestness and purpose in compelling himself thus to all goodness and simplicity, and kindness and humility, and charity and prayer, and driving himself to them by force, may give him His whole self the Lord Himself in truth doing all these things purely in him, without labor or forcing, which before he could not do even by force because of sin that was with him; and all the practices of virtue come to him like nature. For from that time onward, the Lord coming and dwelling in him, and he in Him, Himself performs in him His own commandments, without effort, filling him with the fruits of the Spirit. But if a man forces himself only to prayer, until he shall receive a gift of it from God, but does not in like manner force and compel and accustom himself to these other things, he cannot in truth perform them purely and faultlessly. He should prepare himself in this way to that which is good to the best of his power; for sometimes the divine grace comes to him while asking and praying. For God is good and kind, and to those who ask Him He gives what they ask. But if a man has not the things of which we have spoken, and has not accustomed or adapted himself to them beforehand, even if he receives grace, he will lose it, and falls by pride, or at least makes no progress or increase in the grace that came to him, since he does not give himself to the commandments of the Lord with a will. For the dwelling-place and repose of the Spirit is humility, charity and meekness, and the other commandments of the Lord.

7. One who wishes to please God in truth, and to receive from Him the heavenly grace of the Spirit, and to increase and be perfected in the Holy Spirit, ought, therefore, to force himself to all the commandments of God, and to subdue his heart, however unwilling it may be, according to the saying, Therefore hold I straight all Thy commandments, and all false ways I utterly abhor.11 As a man forces and compels himself to perseverance in prayer, until he has succeeded in this, so in like manner, if he only will, he forces and compels himself to all the practices of virtue, and forms a good habit, and thus always asking and praying the Lord, and obtaining his petition, and receiving a taste of God, and becoming a partaker of the Holy Spirit, he causes the gift that was bestowed on him to grow and thrive, resting in his humility, in charity, in meekness.

8. The Spirit Himself bestows these things upon him, and teaches him true prayer, true charity, true meekness, to which before he forced himself, and sought for them, and cared for them, and meditated upon them, and they were given him; and having thus grown up and been perfected in God, he is permitted to become an heir of the kingdom. The humble never falls. Whence indeed could he fall, being lower than all? A proud mind is a great humiliation; a humble mind is a great exaltation and honor and dignity. Let us therefore force and compel ourselves to humility, though our heart may dislike it, and to meekness, and to charity, praying and beseeching God in faith, hope, and charity incessantly with such an expectancy and aim, that He would send His Spirit into our hearts, that we may pray and worship God in spirit and in truth,12

9. that the Spirit Himself may pray in us, that the Spirit Himself may teach us true prayer, which now we have not, though we force ourselves to it; true humility, which now we cannot attain, even by force; may teach us to bring forth in truth bowels of mercies,13 kindness, and all the commandments of the Lord, without pain or forcing, as the Spirit Himself knows how, filling us with His fruits; and thus the commandments of the Lord being fulfilled by us through His Spirit, who alone knows the will of the Lord, and the Spirit having perfected us in Himself and Himself perfected in us, when we are once cleansed from every defilement and spot of sin, He will present our souls pure and faultless, like fair brides, to Christ, we resting in God in His kingdom, and God resting in us world without end. Glory to His compassions and to His mercy and love, that He has vouchsafed such honor and glory to mankind, has vouchsafed to make them sons of the heavenly Father, and has called them brethren of His own. To Him be glory for ever. Amen.

“In Christ a man receives more than he lost in Adam” A Conversation with Archbishop Damian of Sinai and Pharan Deacon Vladimir Vasilik But then let us think about what kind of purity a man must acquire in order to enter into this Kingdom. Let us not put off our salvation till later, nor hope that we will be purified before death or even at the time of death, or that we will land in “purgatory,” as the Catholics mistakenly think. For those who say, “Later,” it will never come. Therefore let us be concerned about our salvation now, while it is still possible to say, “Now.” 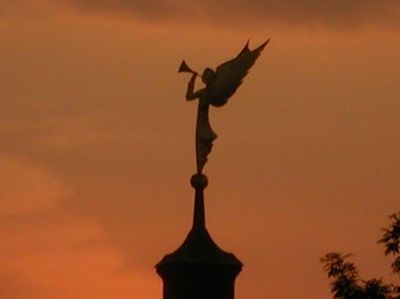 Blow The Trumpet in Zion Fr. Barnabas Powell All too often it’s easy to miss the warnings in my life because my life, my soul, my mind is flooded with my own “voice.” The selfish wants drown out that “still, small voice” that is screaming at me that I am going down a wrong path.
Комментарии