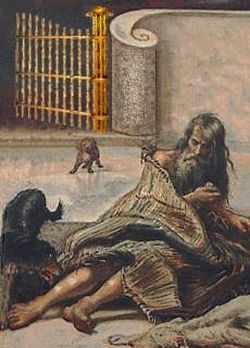 Our Lord’s parable of Lazarus and the rich man is unique among the parables, for in this parable alone one of the characters has a name. The parable begins, “There was a rich man, who was clothed in purple and fine linen and who feasted sumptuously every day. And at his gate lay a poor man named Lazarus”. Compare how the parable of the Prodigal Son begins: “There was a man who had two sons”. One might ask, “What were their names? What was the father’s name? Where did they live?” It doesn’t matter; all that mattered were their actions. In all the Lord’s parables the characters are nameless—the prodigal son and his father, the sower who went out to sow, the man who sowed good seed in his field, but whose enemy came by night and sowed tares in it—none of these characters have names. We ask therefore: why is the poor man in our parable given a name? The name “Lazarus” of course is from the Hebrew “Eleazar”, meaning “God helps”, but this doesn’t explain why he alone is named in all the parables—especially, one might say, since God clearly did not help him during his life, but left him to die by the gate of the rich man.

I suggest that the poor man is given a name to reveal the magnitude of the rich’s man’s sin. For consider it: the rich man left a man suffering outside his very gate whom he knew by name. The poor man was not just another anonymous and nameless beggar in the street, someone whom the rich man quickly passed by and who then vanished from his consciousness. The rich man was on a first-name basis with the poor man. And yet despite this, he still did little or nothing to help him. Every day the rich man feasted sumptuously, and then wiped his mouth and hands with bread (the ancient equivalent of a napkin), throwing aside the scraps. (These were the kind of crumbs falling from the table which the Canaanite woman mentioned in Matthew 15:27.) The poor man was so hungry that he would’ve been grateful even for these, but there is no hint in the parable that he ever was given them. Rather, the rich man finished his sumptuous meal, adjusted his purple and fine linen, walked past Lazarus lying at his gate and went on with his sumptuous life. He may or may not have greeted Lazarus as he passed by; but it is clear that he never gave him alms or brought him past his gate to enjoy food from his table. Instead he let him die at the edge of his property.

A look at the rich man after he himself died reveals that he was something of a slow learner, and that death produced no real change in his heart. To his perplexity, after what was doubtless a great and splendid funeral where his friends declared how wonderful he was, the formerly rich man finds himself engulfed in flame in the next world, and more perplexing still, sees Lazarus far away, feasting at the head table lying in the bosom of no less a celebrity than Abraham himself (the ancient Jews reclined at such feasts, so that one literally reclined on the bosom of the diner feasting next to one; compare John lying on Jesus’ bosom in John 13:23). But does the rich man repent? Does he apologize to Lazarus for his appalling neglect and ask his forgiveness? Does he congratulate Lazarus on his current blessedness? No, none of this. In fact, he doesn’t speak to Lazarus at all—instead, he speaks to Abraham. And, showing how hard and unrepentant his heart still is, asks Abraham to send Lazarus far from the festal table to minister to him. The request is stunning—the rich man requests that Lazarus cease feasting, traverse the long way across the chasm, brave the fire, all to do a service for the man who let him starve and die at his gate, and in all this he still doesn’t even speak to Lazarus! The rich man apparently assumes that Abraham will send Lazarus to do the job as if Lazarus were just a lackey or a slave. Not surprisingly, Abraham demurs. And even then the rich man asks that Abraham send Lazarus from the table to visit his brothers and to do a service for them—still saying nothing to Lazarus. The rich man is a slow learner indeed.

What is the lesson for us? Our Lord tells the parable not to give us an inside peak behind the scenes at the next life, but to give us an urgently needed lesson for this one. The rich man’s sins and punishment show what happens when we store up our treasure and use it all for ourselves, ignoring the plight of the poor at our gate. Placing the parable in the wider context of Luke’s Gospel allows us to see the central point: You cannot serve God and Mammon (Luke 16:13), however much the Pharisees who were lovers of money (v. 14) or the American Dream say otherwise.

We need to remember this parable the next time we visit the mall and encounter someone asking for the morsels that fall from our festal table (or “spare change”, as it is called in our culture). It is true that they may possibly use those morsels in ways that are less than helpful to them, but of course we also use our resources in ways less than helpful to us. We remember here the words of C.S. Lewis when he was rebuked by a friend for giving spare change to a beggar. “He’ll just use it for ale”, said his friend. Lewis paused and responded, “But if I kept it, that’s what I would use it for.” We give our morsels to the poor not just to help them, but to help ourselves transcend our insular selfishness and remember our essential solidarity with the poor. It is as Solomon said: “The rich and poor have this in common: the Lord made them all” (Proverbs 22:2). We too easily rush past the poor man, not realizing he is our own flesh and blood, one of our own family. The question, “Could you spare some change?” should remind us of another question: “If anyone has the world’s goods and sees his brother in need, and yet closes his heart against him, how does God’s love abide in him?” (1 John 3:17) We may think that we know nothing about the man or woman accosting us in the parking lots of our nation and asking for our help. But we do know something about him—we know his name. His name is Lazarus. 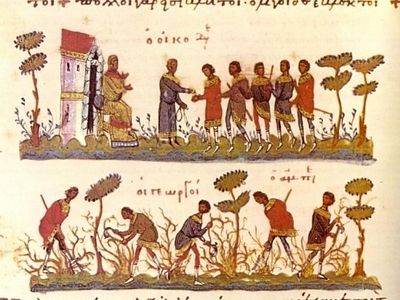 Homily on the Parable of the Vineyard Fr. Peter Pier

Homily on the Parable of the Vineyard Fr. Peter Pier "The Jews rose up in rebellion against their Roman overlords and God abandoned them because they had abandoned Him, and the city of Jerusalem fell. Many were killed, others were raped pillared and plundered and the Jews were scattered to the four corners of the earth, and the first covenant nation-state of Israel came to an end. But as the people who responded to the parable said, God has now created a new vineyard and let it out to new tenants. And if you want to know where the new vineyard is, just look around, because you’re in it. This is the new vineyard of the Lord."

Allegorical Interpretations of Scripture? Fr. John Whiteford Clearly, if the Apostles could interpret the Old Testament in allegorical and typological terms, no one who claims to be a Christian should object to the Church Fathers doing likewise.
Комментарии