On October 14 Georgia celebrates the great feast of Svetitskhovloba

This feast is celebrated in Georgia as a state holiday and declared a day-off.

Georgia celebrates a great Church feast on October 14—Svetitskhovloba. This day is dedicated to the Tunic of the Lord and the Life-giving Pillar, exuding wonder-working Myrrh, reports Novosti-Gruzia ("News-Georgia").

His Holiness Catholicos-Patriarch of Georgia Ilia II on that day headed the solemn service in Svetitskhoveli—the most ancient Cathedral in the country.

The feast of Svetitskhovloba in Georgia is celebrated twice a year: on October 14, when it falls on the feast of the Protecting Veil of the Mother of God, and on July 13, when the Christian world celebrates the Synaxis of the Glorious and All-laudable twelve Apostles, to whom the church in the city of Mtskheta is dedicated.

According to the tradition, in the first century AD, Rabbi Helios bought the Tunic of the Lord from Roman soldiers in the Holy Land, and when he arrived in Mtskheta, he gave it to his sister Sidonia. The latter, having taken this relic into her hands, died at once. The Tunic could not be freed from her arms and Sidonia was buried together with it. A large tree grew on her grave, which became a sacred place for the residents of Mtskheta; miracles of healing occurred near it and even those people who did not confess Christianity venerated it all the same as they felt its particular power.

St. Nino, Equal-to-the-Apostles, having brought the Gospel to Mtskheta, asked tsar Mirian to cut down this tree, to make four Crosses from it and to set them on tops of the mountains on four sides of the state of Georgia of that time.

When the tree was miraculously sawn down and laid on the ground, then healing, wonder-working Myrrh began exuding from the remaining pillar. This continued till the 17th century and untill the invasion by shah Abbas I of Persia. The pillar became known as Life-giving—in Georgian "Svetitskhoveli". The first Church in Georgia, dedicated to twelve Apostles of Christ, was built above it. In 1010-29, the architect Arsukidze built a magnificent Cathedral on this site. Svetitskhoveli was repeatedly subjected to destruction and was substantially reconstructed in the 15th-17th centuries.

All Saints of Georgia Commemorated December 11/24 Archpriest Zakaria Machitadze Saving examined the history of Georgia and the hagiographical treasures attesting to the faith of the Georgian nation, we become convinced that Heavenly Georgia — the legion of Georgian saints, extolling the Lord in the Heavenly Kingdom with a single voice — is infinitely glorious. 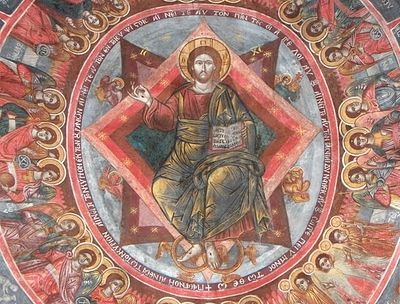 Heaven in a Choir Loft: Reflections of Georgian-Russian Orthodox brotherhood one year after the South Ossetian war

Heaven in a Choir Loft: Reflections of Georgian-Russian Orthodox brotherhood one year after the South Ossetian war In the ongoing saga of foreign affairs involving the Republic of Georgia and the Russian Federation, one story has escaped the attention of the news media. It is the story of an Orthodox Christian parish in Toronto, Canada, where Orthodox of all ethnicities, but especially Russian and Georgian, have come together as brothers, as children in the Kingdom of God. It is a joyful unity unnoticed by the outside world, but for those with eyes to see and ears to hear, it is a foretaste of the age to come, made possible only in Christ.

The Life of St. Nina, Equal to the Apostles and Enlightener of Georgia + 335 AD, commemorated January 14/27 St. Nina was born in Cappadocia and was the only daughter of pious and noble parents—the Roman general Zabulon, a relative of the great martyr St. George, and Susanna, sister of the patriarch of Jerusalem. When St. Nina was twelve years old, she traveled with her parents to the holy city of Jerusalem.
Комментарии
Войдите через FaceBook ВКонтакте Яндекс Mail.Ru Google или введите свои данные: