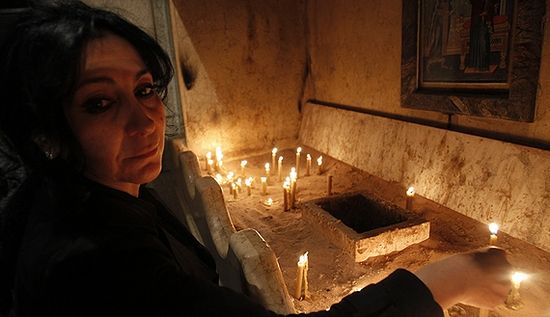 Iptisam, an Iraqi Christian woman, lights candles for victims of the attack on Our Lady of Salvation church of Baghdad, during a mass at an Orthodox church in Amman, November 7, 2010. (photo by REUTERS/Ali Jarekji)

Greek Orthodox Bishop for Baghdad, Kuwait and their surroundings, Ghattas Hazim, realizes that the position assigned to him by the Holy Synod of Antioch, presided over by Patriarch John X Yazigi as patron of that diocese (the area under supervision of a bishop), is not easy.

Hazim is also aware that his mission might be legendary, and requires great effort to heal the wounds of the Christians in this Arab region, especially in Baghdad and the rest of Iraq. This mission started in 1991, during Saddam Hussein’s invasion of Kuwait, and continues today under different forms. The mission is to provide suitable circumstances to secure the Christians in their land and maintain the Christian presence and, in particular, the Orthodox presence in Mesopotamia.

Hazim is from the town of Mhardeh in the countryside of Hama, in Syria, which is home to over 20,000 Christians. He is the nephew of the late Patriarch Ignatius IV Hazim. He was supposed to join his new diocese before the end of this year, where Yazigi would appoint him in his position, and he would preside over the Orthodox diocese in Kuwait.

Hazim emphasized the necessity of not making the Christians in Iraq feel alone. He described the priests of the parishes there as heroes and true fighters, since they never left the Orthodox residents, but cared for them and sought to answer all their needs despite the difficult circumstances.

Hazim revealed shocking figures to As-Safir about the Orthodox presence in Iraq. He said only 30 families out of 600 remain in Baghdad; the rest were displaced following the invasion of Kuwait, and there are fewer than 10 families left in Mosul.

In Iraq’s Basra, all the Orthodox families have been displaced after members of the families were killed or threatened. Indeed, over 90% of the Orthodox Christians in Iraq have been displaced due to the security chaos which has prevailed over the country for the past generation. Hazim hopes that Erbil, in the Kurdish region of Iraq, would be a haven for Christians since it looked like a promising region due to the size of the economic and trade investment, and since it “welcomes our sons who move there from all over Iraq, Syria and Lebanon,” Hazim said.

“The Orthodox confession is recognized in the Iraqi law and constitution,” Hazim said. “Our situation there is similar to our situation in Lebanon and Syria. We have two churches, a school, which is considered one of the most prominent schools in Baghdad, in addition to a retirement home and an orphanage, a center for sports, cultural and educational activities.”

He said, “Speaking from a distance regarding the prevailing situation there is difficult. As soon as I go there and review the reality of the situation I will be able to set strategies and specify the priorities which would serve our people and parish, and help them to remain in their land.”

Hazim said, “The return of those who have been displaced back to their homes is linked to the political and security situation. We cannot urge anyone to go back now, in light of this ongoing war in different regions in Iraq.”

On the subject of whether or not the West is contributing in emptying Iraq of its Christians due to the facilities it is providing, Hazim said, “It is not true that the West is facilitating the emigration of Christians. I know many Christians and Orthodox in particular who went to embassies and did not get visas. Others resorted to the United Nations and other international organizations in order to emigrate and it did not work out.”

Hazim believes that Christians are being slaughtered in Iraq and the West does not lift a finger to protect them. What France provided was simply “out of duty.”

Hazim’s concerns are not limited to the possibility of changing the Christian presence in Iraq; they also include the fear of changing the Arab region as a whole. He said he fears for the civilization of Mesopotamia and the Euphrates, “We have a strong heritage, since before Christianity and during Christianity and Islam. This heritage is in danger and we see that through the violation of shrines and all other cultural sites. We fear for the culture of acceptance and coexistence because it is in danger as well.”

“I do not believe division is the right way of thinking, since Islam is also in danger. I do not believe that today’s campaign is against Christians alone; Islam is a divergent religion which is also threatened,” he said.

Despite all of this danger, Hazim urges against panic. “We are a main element in this region’s culture; Christians and Muslims from all confessions are threatened.”

“I will carry the word of God to my parish in Baghdad and Kuwait: Fear not, little flock, for I am with you. If they persecute you, remember that they persecuted me before you. We will not fear, because this is not the first time in history that this has happened. We will stay, as long as faith remains and as long as our God exists, we will remain present,” he said. 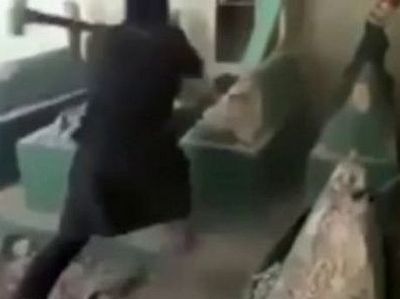