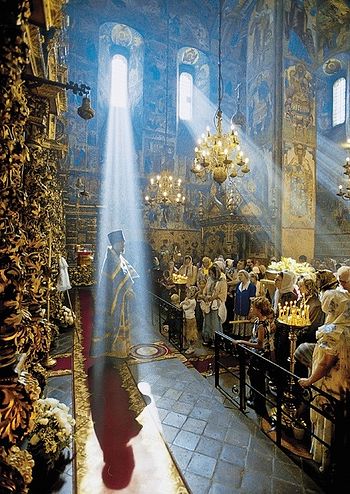 What fruit God expects from Christians.

1. All things that are seen were created by God, and He gave them to men for refreshment and enjoyment, and He gave them also a law of righteousness. But from the time of Christ's coming God seeks other fruit, and another righteousness, purity of the heart, a good conscience, kind words, holy and good thoughts, and all the discipline of the saints. The Lord says, "Except your righteousness exceed that of the scribes and Pharisees, ye cannot enter into the kingdom of heaven.1 In the law it is written, Thou shalt not commit fornication; but I say unto you, Thou shalt not desire, neither shalt thou be angry." He who wishes to be a friend of God,2 and a brother and son of Christ, must do something more than other men, that is, to consecrate heart and mind themselves, and to stretch up his thoughts towards God. In this way God secretly gives life and help to the heart, and entrusts Himself to it. When a man gives God his secret things, that is, his mind and thoughts, not occupying himself elsewhere, nor wandering away, but putting constraint upon himself, then the Lord deems him worthy of mysteries, in greater sanctity and purity, and gives him heavenly food and spiritual drink.

2. A man who is possessed of much substance, and has both servants and children, gives a different kind of food to the servants from what he gives to his own born children, because the children are their father's heirs, and eat with him, being made like to their father. Even so Christ, the true Master of the house, who created all things Himself, nourishes the evil and the unthankful, but the children whom He has begotten of His own substance, to whom He has imparted of His grace, in whom the Lord is formed, these He provides beyond others with special refreshment and diet and meat and drink. Going up and down with Jesus their Father, they receive the gift of Himself, as the Lord says, He that eateth My flesh and drinketh My blood dwelleth in Me, and I in him, and he shall not see death.3 Those who possess the true inheritance have been begotten as sons of a heavenly Father, and pass their time in their Father's house, as the Lord says, The servant abideth not in the house, but the son abideth forever.4

3. If we then desire to be born of the heavenly Father, we ought to do something that exceeds the rest of mankind – diligence, effort, zeal, love, a good conversation, to be in faith and fear, as desiring to attain good things of such magnitude, and to inherit God. The Lord, it says, is the portion of mine inheritance and of my cup.5 Thus the Lord, beholding our good purpose and our endurance, performs His mercy, and cleanses us from the defilement of sin, and from the eternal fire that is in us, and makes us meet for the kingdom. Glory to His tender compassion and to the good pleasure shewn of the Father, and of the Son, and of the Holy Spirit. Amen.

Those who give their thoughts and their mind to God do so in the hope that the eyes of their heart may be enlightened, and God vouchsafes to them mysteries in the greatest sanctity and purity, and imparts to them of His grace. What we who desire to attain the good things of heaven ought to do. Then the apostles and the prophets are compared to the sun's rays coming in at a window. The Homily also teaches what is Satan's "Earth," and what that of the angels, and that both are intangible and invisible.

1. All works visibly done in the world are done in hope, with a view to partaking of the results of the labour. If it were not for the assurance of enjoyment from the toil, no advantage would be gained. The husbandman sows in hope of fruits, and is supported under his labours by the expectation. He that plougheth, the apostle says, plougheth in hope.6 He that takes a wife, does it in hope of having heirs. The merchant commits himself to the sea and the risk of death for the sake of gain. So also in the Kingdom of Heaven a man gives himself up in hope that the eyes of his heart may be enlightened,7 withdrawing from the affairs of this life, and keeping himself free for prayers and supplications, looking for the Lord, when He shall come and manifest Himself to him, and shall cleanse him from the sin that dwells in him.

2. He puts no confidence,8 however, in his labours and manner of life, until he obtains the things hoped for, until the Lord comes and dwells in him in the full experience and energy of the Spirit. And when he tastes the goodness of the Lord, and delights in the fruits of the Spirit, and the veil of darkness is taken away, and the light of Christ shines upon him and works in him in joy unspeakable, then is he fully satisfied, having the Lord with him in great affection, as the merchant in the illustration rejoices when he has gained. But he still has conflict and fear from the robber spirits of wickedness, lest he should grow slack and lose his labour, before he is accepted in the kingdom of heaven, in the Jerusalem which is above.

3. Let us then beseech God that He would put off from us the old man, and put on us the heavenly Christ, here and now, so that being in gladness, and thus being led by Him, we shall be in great tranquillity. The Lord, who desires to fill us with the taste of the kingdom, says, Without Me ye can do nothing.9

And yet He knew how to enlighten many by means of the apostles. They were but creatures, but they nourished their fellow servants. Thoughts that were dead and corrupted they quickened and restored to life by their good conversation and instruction. It is possible for one creature to nourish and quicken another. The clouds, the rain and the sun, when so commanded, quicken the seeds of wheat or barley, though they are only creatures. Like light which comes in through a window, while the sun sends out his beams upon all the world, so the prophets were the lights of their own house of Israel, and no more; but the apostles were suns, shooting out their beams into all the quarters of the world.

4. Well, there is an "earth," on which the beasts dwell; and there is an "earth " in the air, in which the birds walk and live. If the birds wish to stand or walk on land, there are fowlers to catch them. The fishes too have an "earth," which is the water of the sea. Wherever anything is born, on land or in the air, there it has its existence, its sustenance, and its pleasure. In the same way there is a Satanic "earth " and home, where the powers of darkness and the spirits of wickedness live and walk and take their pleasure; and there is a luminous "earth " of the Godhead, where the camps of angels and of holy spirits walk and take pleasure. That darksome earth cannot be seen with the eyes of this body, nor be felt; neither is the luminous earth of the Godhead felt, or seen by the fleshly eyes. But to those who are spiritual both are discernible to the heart's eye, that Satanic earth of darkness and the luminous earth of the Godhead.

5. The fable of those without says that there are mountains, which are fiery, because there is fire in them, and there are there animals like sheep. Those who hunt them make iron wheels, and cast hooks and throw them into the fire, because those animals have fire for their meat, and fire for their drink, their pleasure, their increase, and their life. Fire is everything to them. If you bring them out into another air, they die. When their coats are dirtied, they are not washed in water, but in the fire, and they get cleaner and whiter. Christians in like manner have that heavenly fire for their meat. That is their pleasure. That cleanses, and washes, and sanctifies their heart. That brings them to increase. That is their air and their life. If they go out of it, they are destroyed by the evil spirit, as the animals in the fable die when they leave the fire, as the fish when they leave the waters. As four-footed beasts cast into the sea are drowned, as birds walking on the ground are taken by the fowlers, so the soul which will not stay in that "earth " is stifled and perishes. If it has not that divine fire for meat and drink and raiment, and cleansing of heart and sanctification of soul, it is taken by the evil spirits and demolished. But as for us, let us enquire in earnest whether we have been sown in that unseen "earth," and engrafted in the heavenly vine. Glory be to His mercies. Amen.

2 In the printed texts, the words that follow, down to "cleanses us" in §3, have been erroneously transferred to Homily XIV. Here the order of the Bodleian and Holkham MSS. has been restored, as was done in Haywood's translation.

8 The MSS. appear to read ἐπελπíξει without variation, and this has accordingly been adopted in the translation; but it would be more natural to expect ἀπελπíξει, "nor does he despair of his labours." 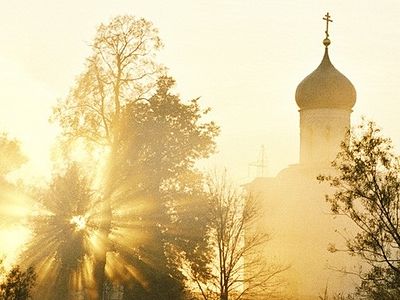 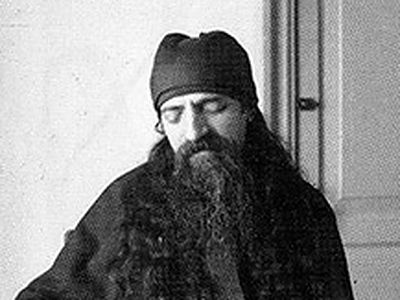 Lenten Reading: St. Macarius The Great. Homily 8 St. Macarius the Great Concerning things which befall Christians at prayer, and concerning the measures of perfection—whether it is possible for Christians to reach the perfect measure. 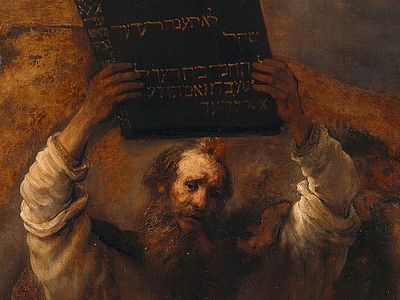 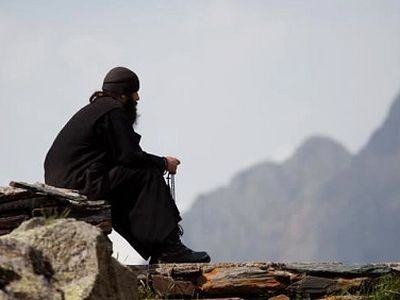 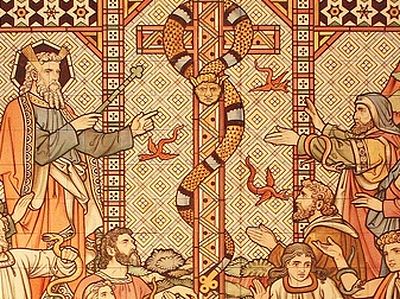 Lenten Reading: St. Macarius the Great. Homily 11 St. Macarius the Great That the power of the Holy Ghost in man’s heart is like fire; and, what things we need, in order to distinguish the thoughts that spring up in the heart; and concerning the dead serpent fixed by Moses at the top of the pole, which was a type of Christ. The Homily contains two dialogues, one between Christ and the evil one, Satan; the other between sinners and the same. 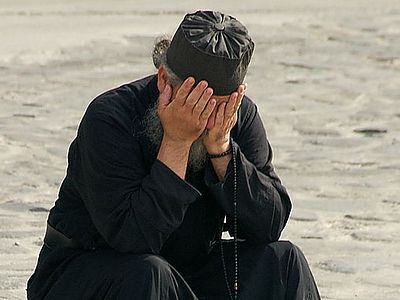