St. Sophronius the Patriarch of Jerusalem 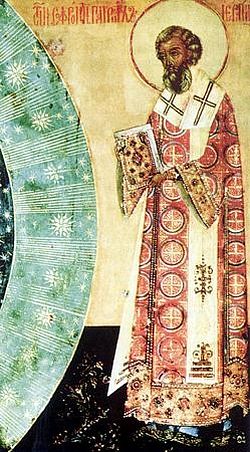 Photo: Days.Pravoslavie.Ru
Saint Sophronius, Patriarch of Jerusalem, was born in Damascus around 560. From his youth he was distinguished for his piety and his love for classical studies. He was especially proficient in philosophy, and so he was known as Sophronius the Wise. The future hierarch, however, sought the true philosophy of monasticism, and conversations with the desert-dwellers.

He arrived in Jerusalem at the monastery of Saint Theodosius, and there he became close with the hieromonk John Moschus, becoming his spiritual son and submitting himself to him in obedience. They visited several monasteries, writing down the lives and spiritual wisdom of the ascetics they met. From these notes emerged their renowned book, the LEIMONARION or SPIRITUAL MEADOW, which was highly esteemed at the Seventh Ecumenical Council.

To save themselves from the devastating incursions of the Persians, Saints John and Sophronius left Palestine and went to Antioch, and from there they went to Egypt. In Egypt, Saint Sophronius became seriously ill. During this time he decided to become a monk and was tonsured by Saint John Moschus.

Toward the end of his life, Saint Sophronius and his flock lived through a two year siege of Jerusalem by the Moslems. Worn down by hunger, the Christians finally agreed to open the city gates, on the condition that the enemy spare the holy places. But this condition was not fulfilled, and Saint Sophronius died in grief over the desecration of the Christian holy places.

Written works by Patriarch Sophronius have come down to us in the area of dogmatics, and likewise his “Excursus on the Liturgy,” the Life of Saint Mary of Egypt (April 1), and also about 950 troparia and stikheras from Pascha to the Ascension.

While still a hieromonk, Saint Sophronius reviewed and made corrections to the Rule of the monastery of Saint Sava the Sanctified (December 5). The saint’s three Odes Canons for the Holy Forty Day Great Fast are included in the the contemporary Lenten Triodion.

Patriarch Sophronius, you were glorious in the splendor of sobriety, / and through the radiance of your words you revealed ineffable enlightenment from heaven. / For by your life you attained wisdom / and now you confirm the Church / as an illustrious hierarch and intercessor for us with the Lord.

You were most wise among patriarchs, Sophronius of Jerusalem. / You struggled with divine zeal, spreading the commandments of truth with your lips. / You set right the foundations of the Church and firmly established the monastic order. / You brought to light wise sermons, and instructed by them, / therefore we cry out to you: “Rejoice, splendid boast of the Orthodox.”